On a recent Thursday morning, Creighton University biology professor John Schalles, PhD, on his usual summer research work, made a call back to campus from the field.

“I’m sitting in a Creighton boat tied to a tree on the edge of a swamp off Lewis Island,” said Schalles, referencing a spot just inland of Georgia’s barrier islands where, for more than 30 years, the biologist has been charting the health of the region’s coastal marine ecosystems.

With a crew of two summer interns and three Georgia school teachers, Schalles was measuring trees in the swamp, sited along the banks of the Altamaha River that flows southeast to the sea and which is home to some of the oldest and most biologically rich floodplain swamp forest stands in the Southeastern states.

The work is part of an expanding effort by the National Science Foundation’s Georgia Coastal Ecosystems Long-Term Ecological Research program to analyze the connections between coastal salt marshes, estuaries and offshore waters, and upstream freshwater swamps and marshes — key habitats for plants and animals, and crucial defenses for both fresh- and saltwater health.

“It’s been a dynamic period here, especially in the last 20 years,” Schalles said of the coastal ecosystem project in which he collaborates with scientists from the University of Georgia and six other schools. “We’ve seen persistent drought that’s been tough on our salt marshes, and we’ve experienced sea-level rise and reduced river flows that are beginning to damage freshwater wetlands, including swamps on the Lower Altamaha. But we’ve also seen marshes bounce back after these disturbances.”

Last month, Schalles and his colleagues learned their project has received an additional six years of funding from the NSF, and his lab’s funding was increased. Schalles started taking field course students to the University of Georgia Marine Institute at Sapelo Island in 1986, and several hundred Creighton students have benefited from these experiences. He also has taken two to five Creighton undergraduates and graduate research students to the Georgia coast most years since 1997.

This latest round of funding marks the third renewal of NSF funding for the project, which began in 2000. With the Schalles Lab’s analysis of archival and recent Landsat imagery, the project now operates with 35 years of statistics on salt marsh plant biomass, providing an important metric of ecosystem health. In the GCE’s study domain at and near Sapelo Island, Schalles and graduate student John O’Donnell documented a 35.5% net biomass loss over the 35 years of study, attributable primarily to climate change and reductions in freshwater river flows.

“You can’t explain too much from year-to-year data,” Schalles said. “But with over three decades of data, we were able to document serious long-term reductions in plant production. With the continuation of funding, we can extend this analysis beyond four decades.”

Georgia has nearly one third of East Coast salt marsh habitat. In work reported by Schalles at an international conference this summer, researchers from Creighton and Georgia Southern University used new high-resolution mapping to precisely identify about 620 square kilometers of salt marsh in their Landsat coverage area. This allowed extraction of 680,000 salt marsh pixels from each satellite image, representing a remarkable sample size.

In a new spatio-temporal analysis of this extended area, the overall decline of salt marsh plant biomass was only about 16.5 percent, with losses of 8.5 to 28.5 percent in six coastal watersheds and a gain of 9.5 percent in the Altamaha watershed unit. The Altamaha is the third largest river, by discharge, on the East Coast and these freshwater discharges have protected adjacent salt marshes from hypersalinization.

“So the larger picture is not as grim as the declines in our local study area, but it’s still not good,” Schalles said. “These marshes aren’t just crucial to salt marsh plants and animals, but they provide important ecosystem services to adjacent estuaries and offshore waters. In addition, commercial harvests from these waters are a vital revenue source to the five coastal counties.

"The Georgia Coastal Ecosystems project is showing how all the various parts of these coupled ecosystem are working together and how every part contributes to the food base, including the seafood that fishermen are pulling out of the ocean and estuaries. Lose 15 to 20 percent of that, and it’s a big blow to fishing and nursery functions. That’s our world, though. Our project is documenting and quantifying the interconnectedness of these elements.”

The Georgia coastal ecosystem project is one of 28 similar projects funded by the NSF at sites around the U.S., each documenting trends in different types of ecosystems. In Georgia, with the combination of the rich variety of saltwater life and the palette of diversity in the Altamaha watershed, Schalles said the NSF is especially interested in how ripples in that ecosystem make waves in the wider environment.

“It’s the kind of project the NSF appreciates because it has the ability to show what’s happening in a range from small changes here to potentially big changes in the larger environment and economy,” Schalles said from the Altamaha. “Two miles upriver from me are some of the oldest forests in the region, with trees between 1,000 and 1,300 years old. And we’re seeing riparian trees just a few miles downstream dying. Is it sea level rise, or is it drought or something else? Will we see these magnificent swamps become marshes or open water, which is an expected consequence of sea level rise? It’s all tied together and we’re learning more every day.” 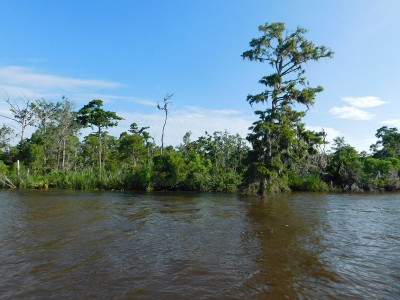 Caption: A declining stand of freshwater swamp forest on the Lower Altamaha River in Georgia. 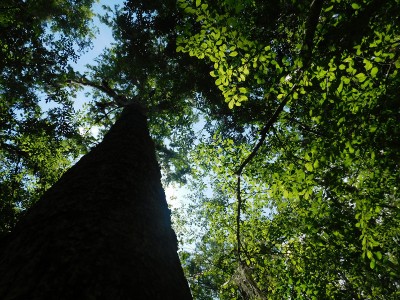 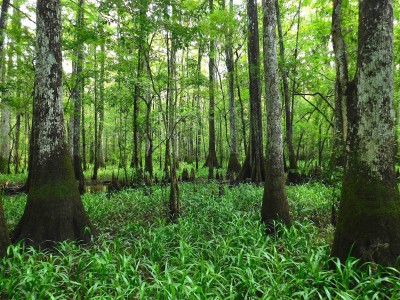 Caption: Swamp on the Lower Altamaha.