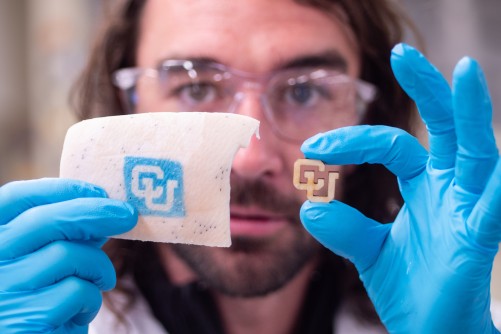 Carson Bruns holds up a prototype tech tattoo that is activated by ultraviolet light.

Newswise — Are you running a fever? Need to reapply your sunscreen? Your tattoo may have the answer.

Carson Bruns, an assistant professor and chemist in the ATLAS Institute at the University of Colorado Boulder, is working to bring tattoos into the future. His team’s “tech tattoos” don’t just linger in your skin and look cool—they also change color in response to diverse signals. The group’s prototypes include tattoos that only appear in sunlight and colorful inks that vanish when they get hot.

Bruns, who said that the technology behind tattoos hasn’t changed much in thousands of years, believes that these smart inks could one day revolutionize medicine by alerting people when they run a fever or allowing doctors to diagnose medical conditions without expensive blood tests.

The scientist spoke about his work Saturday, Dec. 1, at the TEDxMileHigh: Reset speaker series in Denver.

“When you think about what a tattoo is, it’s just a bunch of particles that sit in your skin,” said Bruns, also a faculty member in the Department of Mechanical Engineering. “Our thought is: What if we use nanotechnology to give these particles some function?”

This pursuit of tattoos that do more merges two of Bruns’ passions. As a chemist, he works to obtain precise control over molecules to make miniscule machines. But he’s also an amateur painter and tattoo artist who’s drawn to “outrageous color palettes.”

To bring the two fields together, Bruns and graduate student Jesse Butterfield first encase dyes in plastic microcapsules smaller than the width of a human hair. These capsules protect the dyes from being broken down by the body but still allow them to sense and respond to changes in their surroundings.

And, Bruns added, such inks can be applied to the skin with the same needles used by any tattoo artist.

The approach has a lot of potential, he said. Bruns and Butterfield have, for example, experimented with creating tech tattoos using commercially-available dyes that are only visible when exposed to ultraviolet rays. Such tattoos, which Bruns calls “solar freckles,” could be a boon for people who roast in the sun.

“If you were to put sunscreen over this tattoo, it would disappear, even in the sunlight,” Bruns said. “When your sunscreen wears off, it would reappear, giving you a reminder that you need to reapply your sunscreen.”

In the same vein, the team has developed tattoos that are turned on and off by changes in temperature—a technology that, Bruns said, could give your body its own, built-in thermometer.

But, he added, the team’s approach to making tech tattoos could work with almost any kind of dye. For that reason, he’s also thinking bigger. Bruns has imagined creating tech tattoos that register blood alcohol levels—indicating when someone is too drunk to drive—or that even measure spikes and dips in blood glucose.

Bruns admitted that you won’t find tech tattoos in your neighborhood studio for several years, at least. His creations will need to undergo rigorous safety testing before they can be applied to people. But there is one person who already sports a tech tattoo: Bruns himself.

The scientist gave himself his own solar freckles—two blue dots on his forearm. “I wanted to see if it works,” he said.