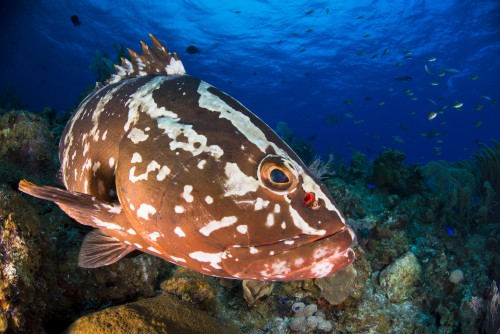 The Nassau grouper (Epinephelus striatus) lives on the coral reefs of the Caribbean Sea and adjacent waters. Its numbers have been sharply reduced by overfishing in recent years, and it is a slow breeder. 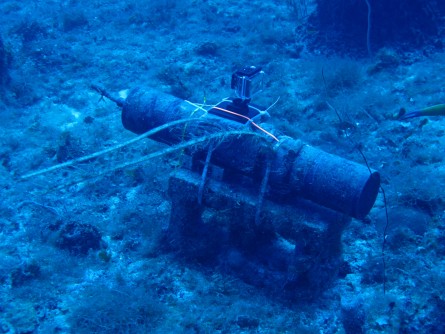 A hydrophone is configured with a GoPro camera at a spawning aggregation site.

Newswise — Eavesdropping on groupers mating in their natural habitats isn’t creepy. In fact, it’s imperative to ensuring their survival. For years, scientists have used passive acoustic monitoring techniques to study the behavior of fishes. A particular application of this technique is used to observe the reproductive cycle of fishes, including groupers.

In a new study, researchers from Florida Atlantic University’s College of Engineering and Computer Science and Harbor Branch Oceanographic Institute and collaborators, have taken this technology to the next level using deep neural networks – a set of algorithms modeled after the human brain. They have developed an effective method to classify grouper species by their sounds or “grouper calls.”

Numerous fish produce sounds for many reasons like courtship and mating, navigation, and defending their territories from intruders. Some groupers produce sounds associated with courtship during spawning aggregation that are specific to species. They swim long distances and gather in high densities for mass spawning at precise locations and times. This widespread reproductive strategy is typically shared among the groupers.

“The sounds groupers make vary in the 10 to 500 Hertz frequency range and have distinctive characteristics that can be seen in a spectrogram, which is a visual representation of the spectrum of frequencies in a sound or other signal,” said Hanqi Zhang, Ph.D., lead author, associate chair, and a professor in the Department of Computer and Electrical Engineering and Computer Science at FAU. “For example, the red hind grouper calls are in the 100 to 200 Hertz band, while the Nassau grouper calls are in the 30 to 300 Hertz band.”

For the study, Zhuang, and co-authors Ali K. Ibrahim, a graduate student at FAU; Laurent M. Cherubin, Ph.D., an associate research professor at FAU’s Harbor Branch; Michelle T. Scharer-Umpierre, Ph.D., an associated researcher at the University of Puerto Rico; and Nurgun Erdol, Ph.D., chair and professor in FAU’s Department of Computer and Electrical Engineering and Computer Science, tested convolutional neural networks and long short-term memory networks to classify the sounds produced by the four species of groupers. They were able to demonstrate that a data-driven feature extractor like the one they used in their study outperformed the hand-crafted one with a large margin.

The concentrated nature and short duration of the grouper spawning season – a couple of months each year – make them especially vulnerable to overfishing. Furthermore, it typically takes them five to 10 years to reach sexual maturity before they can reproduce and replenish their populations.

“It is reported that about 12 percent of the 163 grouper species worldwide are at risk of extinction if current overfishing trends continue, and an additional 13 percent are Near Threatened,” said Stella Batalama, Ph.D., dean of FAU’s College of Engineering and Computer Science. “Our marine resources are not infinite, and studying the spawning aggregations of groupers and other species is vital to conservation efforts aimed at reversing worldwide depletion of endangered fishes and sustaining marine biodiversity. The technology developed by our researchers is a critical tool to help accomplish this important endeavor.”

Findings from this study also will help to inform fisheries managers where protective measures are necessary. Future studies will implement the new algorithm developed by the researchers in a real-time platform and will explore the potential of applying this method to detect and classify other fish calls.

This research is supported by the Harbor Branch Oceanographic Institute Foundation, and in part, by NOAA Saltonstall-Kennedy Grant (No. NA15NMF4270329). 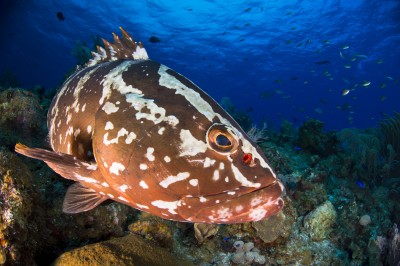 Caption: The Nassau grouper (Epinephelus striatus) lives on the coral reefs of the Caribbean Sea and adjacent waters. Its numbers have been sharply reduced by overfishing in recent years, and it is a slow breeder. 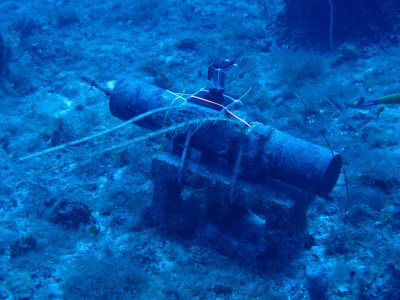 Caption: A hydrophone is configured with a GoPro camera at a spawning aggregation site.