‘Hijacker’ Drives Cancer in Some Patients with High-Risk Neuroblastoma 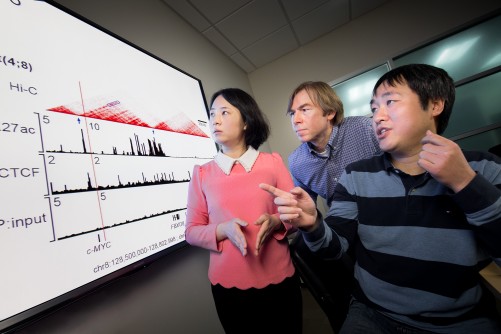 Newswise — Researchers have identified mechanisms that drive about 10 percent of high-risk neuroblastoma cases and have used a new approach to show how the cancer genome “hijacks” DNA that regulates other genes. The resulting insights may help scientists develop more effective therapies, including precision medicines.

c-MYC belongs to a family of transcription factors that regulates a wide range of important cellular processes. It is the second MYC family member that has been linked to neuroblastoma. About 25 percent of high-risk neuroblastoma patients have extra copies of MYCN. But c-MYC is not amplified in neuroblastoma. Until this study, evidence was lacking about the gene’s role in neuroblastoma, which develops in immature nerve cells called neuroblasts.

“These findings establish c-MYC as a bona fide oncogene in a clinically significant group of high-risk childhood neuroblastoma,” the authors noted. c-MYC can be detected in the clinic, and the protein offers another focus for precision drug development, particularly for an emerging class of drugs that work by degrading proteins like c-MYC.

The research also marks the apparent debut of a technology called in situ chromosome conformation capture, or Hi-C, to identify additional genetic abnormalities driving pediatric cancer. The tool is also known as 3-D genomics. The approach helps researchers capture genomic interactions that bring widely separated pieces of DNA together through the loops and folds of the DNA molecule.

Co-corresponding author Jinghui Zhang, Ph.D., chair of the St. Jude Department of Computational Biology, and her colleagues used the technology to show c-MYC sometimes hijacks the regulatory DNA of other genes to drive its own expression.

Prior to completing the whole genome sequencing and analysis required for 3-D genomics, Zhang and her colleagues showed that c-MYC was overexpressed in about 10 percent of the 123 neuroblastoma patient tumors included in the study. The samples were part of National Cancer Institute’s Therapeutically Applicable Research to Generate Effective Treatments–or TARGET initiative.

Researchers showed that patients with high production of c-MYC were distinct from the 25 percent of high-risk neuroblastoma patients with MYCN amplifications. But patients in both groups had similarly poor survival.

“Studies in the zebrafish model indicated that c-MYC could in fact cause neuroblastoma, even though it was never amplified at the gene level like MYCN in childhood neuroblastoma, leading to in- depth studies by Dr. Zhang and her colleagues to investigate other genomic mechanisms,” Look said.

Further analysis of the tumor data by co-first author Yu Liu, Ph.D., revealed chromosomal rearrangements that occurred close to c-MYC in some tumors. Such rearrangements, or translocations, happen when chromosomes break and re-assemble, sometimes with disastrous results. Liu is a postdoctoral fellow in Zhang’s St. Jude laboratory. Co-first author Mark Zimmerman, Ph.D., is a member of Look’s laboratory.

Zhang and her colleagues combined whole genome sequencing of neuroblastoma cell lines with 3-D genomics to reveal how the translocation led to overexpression of c-MYC. The researchers showed that the translocation put c-MYC next to pieces of DNA called super-enhancers that normally regulate and rev-up expression of other genes. c-MYC hijacked the super-enhancers, driving gene expression and fueling development of neuroblastoma.

“Hi-C allowed us to profile the genome comprehensively and establish rather than infer the connection between the super-enhancer and the oncogene,” Zhang said.

Research to understand the genetic abnormalities driving cancer has focused on mutations in coding regions of DNA that lead to changes in protein structure and function or on translocations that result in fusion genes and abnormal proteins. “This study shows that rearrangements that affect non-coding regions of the genome could be an important class of structural variations that drive cancer by disrupting the regulation of oncogenes,” Zhang said.

Working in neuroblastoma cell lines, Richard Young, Ph.D., of the Whitehead Institute and his colleagues identified another route to c-MYC overexpression. The researchers found DNA regions that enhance c-MYC expression were amplified, or increased, in neuroblastoma cell lines with c-MYC overexpression. Enhancer amplification has been reported in other cancers, including leukemia and lung cancer, where it helps promote the transformation of normal cells to malignant ones.

The study’s other authors are John Easton, Ying Shao and Beisi Xu, all of St. Jude; Shuning He, Adam Durbin, Zhaodong Li and Nina Weichert-Leahey, all of Dana-Farber; Brian Abraham of the Whitehead Institute; and Shizhen Zhu and Xiaoling Zhang, both  of the Mayo Clinic.