“at Stanislaus State, We’re Training Our Students to Be Leaders in the Nursing Industry.”

Every day, James Bowles uses 15 years of military medical experience to lead Stanislaus State’s renowned nursing simulation program. In the process he’s helping to prepare hundreds of students to change health care as we know it. 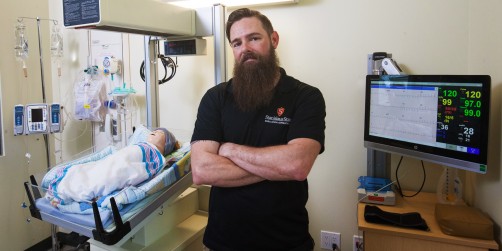 Newswise — No two days are alike for James Bowles. One might start with a medical emergency, like a patient who starts hemorrhaging following heart surgery. Another might end with the cries of a healthy baby being born.

These scenarios — which take place at the School of Nursing at California State University, Stanislaus, where Bowles works — aren't actually real, though.

All happen with the help of human patient simulators in the lab of the Stanislaus State School of Nursing Simulation program, which gives nursing students the chance to experience the same situations they'll encounter once they start working.

As a simulation operations professional at Stan State, Bowles develops and directs this training for more than 500 nursing students every semester. It's his job to make the learning environment — storyline, visuals, even sounds — as lifelike as possible.

"Simulation provides you with the opportunity to learn from the mistakes you don't want to be making on a real patient. We want students to make those mistakes here in the lab where it's safe and we're able to assist," he explains.

"With simulation, we're training our students to be more than healthcare providers — we're training them to be leaders in the nursing industry. At Stanislaus State, we have created a culture that embraces simulation; it is a huge part of our nursing programs. This is what makes us so unique," says Bowles, a Certified Healthcare Simulation Operations Specialist. Only 15 people in California hold the title.

Where Theater and Medicine Meet

During a simulation exercise, Bowles is the director, the maestro. He might whisper directions into the earpiece of an actor playing a patient or maneuver a robot on a hospital bed from behind a one-way mirror. All the while, he's assessing each student's interaction with their patient via webcam. Sometimes he even plays the role of patient himself.

"We make these exercises as close to the real thing as we can," Bowles says. "Through this training, our students are able to obtain perspective, remain calm, and think critically about what needs to be done to save or treat a patient."

Under Bowles' guidance over the past two years, the nursing school's simulation program has expanded dramatically, now boasting more than 20 patient beds, a simulation apartment, a debriefing room and a classroom, all offering dozens of scenarios that allow nursing students to complete 10 simulation experiences in just their first year.

"It is really rewarding to see the students come in on Day One and observe how they grow stronger as they move through the simulation program," he says, noting that while every day might bring a different lesson, his objective is always the same: to produce career-ready students.

"By being exposed to it here in a controlled, safe environment, they learn how to react and handle the situation. These exercises give them the opportunity to get over the nervousness and any jitters before interacting with a real patient."

​Training Thousands to Save Lives

Bowles joined the U.S. Army in 2000, actively serving for five years before becoming a Civil Affairs Team Senior Medic in the Army Reserves and later working as a defense contractor until 2015. He went on to earn a bachelor's in health administration in 2016.

In all, he deployed overseas four times. It was during his deployment to Iraq, in 2003, that Bowles — who had limited formal medical training at the time — found himself taking on the role of first responder. "I was out there in the midst of it, faced with saving these guys' lives," he remembers.

Not long after, he began formal combat medic training and soon started thinking about a different direction for his life. "I discovered it was more rewarding to be out there saving lives rather than being tasked to take lives," he says plainly.

A few years later, Bowles began leading health care simulation training for military personnel and civilians worldwide, developing nearly 50 distinct simulation-based programs for the Department of Defense. And from there he found what looks to be his life's work.

He estimates that to date he has trained tens of thousands of people. "I have run into students years later who have told me, 'That stuff you taught me in the simulation lab, that exact scenario helped me save lives out in the field.'

That is a great feeling. It is very rewarding."

Learn more about the Stanislaus State School of Nursing Simulation program and the degrees and certificate programs offered.