“San Francisco Is a Diverse Place in Thought and Ethnicity.”

Dr. Vincent Matthews’ time at San Francisco State University gave him exactly what he needed to get his dream job – head of the school district in which he was once a student. 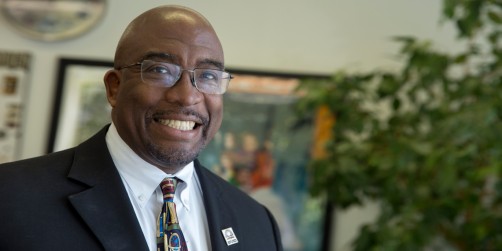 “As superintendent, I am able to make a difference in so many lives. Who better to make an impact in the neighborhood than a person who grew up here?”

Vincent Matthews, Ed.D., was still in high school when, out of nowhere, he found the profession that would end up as his life's work.

"My love for teaching goes back to high school. I began tutoring a couple of friends on the football team — for completely selfish reasons, I have to say," recalls Dr. Matthews, who in May 2017 took on the role of superintendent of the San Francisco Unified School District (SFUSD).

"They needed a C average in order to play football, and I wanted to be sure they were able to bring their grades up. Once I saw those I was tutoring conquer a skill they weren't able to conquer previously, I fell in love with teaching."

In fact, Matthews was part of the first cohort to graduate from the campus's doctoral degree in educational leadership. "The Ed.D. program at San Francisco State was rigorous and tough; it definitely prepared me for this position today," he says. Fifteen CSU campuses now offer the doctoral program.

As a child growing up in San Francisco, Matthews was captivated by the world of magic and would spend hours learning sleight-of-hand tricks, like getting a toothpick to "disappear" beneath a napkin.

These days, he'll take time to share his tricks — which have gotten more sophisticated over the years — with kids at schools in the Mission District or North Beach. "I still get more of a kick out of my tricks than my audience does!" he laughs.

That ability to effortlessly connect with students, faculty, administrators, and parents from all backgrounds is something he honed in part at the CSU, he says. "San Francisco State is such a diverse place in thought and ethnicity," adds Matthews. "It really gave me the opportunity to hear different points of view that I otherwise would not have been exposed to."

And while the father of three has worked in school districts across the state — from Inglewood and San Jose to Oakland and San Diego — he has kept his focus trained on two goals: tackling the achievement gap among historically under-represented students and raising academic performance.

In the 30 years since he first set foot in a classroom as a newly minted teacher, Matthews has had ample time to develop a clear idea of what it means to be a leader: "It's taking a group to a place they wouldn't be able to get to if you weren't there."

Now, as the head of SFUSD — the seventh-largest school district in California — he's fighting for the success of every one of the more than 57,000 children and teenagers in the 133 schools in his purview.

"We are preparing students for life and for careers that will allow them to thrive in the 21st century," he says simply.  "My team and I set the direction that the district will move in. As superintendent, you are the loudest cheerleader of the district."

That extends to advocating for higher education in the state. "The CSU is critical to the state of California," Matthews stresses, citing the 1960 Educational Master Plan, which recognized a need for affordable higher education for every qualified resident.

"The state colleges play a very important role; they provide the opportunity for people to obtain a higher education so they can live their dreams and contribute to society."

Matthews may have figured out early on that education was both his passion and his gift, but the native San Franciscan is still inspired and pleased with how his career has unfolded.

"I don't know if I would say that [coming back to SFUSD] was always the plan, but it was certainly always the dream," he says thoughtfully. "I have the opportunity to lead the community that raised me. I am able to make a difference in so many lives. Who better to make an impact in the neighborhood than a person who grew up here?"

Still, Matthews knows the tremendous opportunity he has in setting up SFUSD students for success, because he benefitted immensely from the support he received.

"I was lucky enough to have people who poured that time and confidence into me. I want that for our students."

Learn more about how the CSU prepares teachers and educators, including how to apply to doctoral programs in educational leadership.