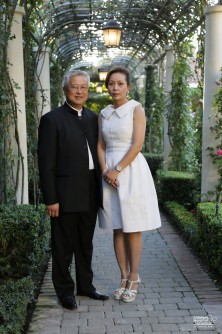 Newswise — LOS ANGELES (February 9, 2015) – Prominent entrepreneur Ming Hsieh and his wife Eva have made a $1 million gift to support the Children’s Orthopaedic Center at Children’s Hospital Los Angeles (CHLA). The gift on behalf of the Hsiehs and their charitable foundation, The Hsieh Family Foundation, was inspired by the Center’s tradition of excellence and innovation and the family’s experience with the Center’s medical care.

“Ming and Eva have been longtime friends and supporters of the hospital and we are appreciative of their generous donation to support the Children’s Orthopaedic Center,” says Richard D. Cordova, FACHE, president and CEO of Children’s Hospital Los Angeles. “Our Orthopaedic Center is ranked second in the nation and this gift will enhance the ability of the center to provide the best orthopaedic care to children.”

CHLA’s Children’s Orthopaedic Center cares for more than 23,000 infants, children and young adults annually, including the provision of more than 1,800 operative procedures. With its recent ranking in the 2014 U.S. News & World Report Best Children's Hospital survey as the number two program in the nation, it has been recognized as being one of the nation’s most comprehensive programs dedicated to the care of children. From performing spinal fusion procedures for complex spine deformities to mending simple fractures, the Center’s specialists are trained in the care of every type of pediatric orthopaedic anomaly.

The Hsiehs have been longtime supporters of CHLA and are members of the institution’s Children’s Fund 100 for families that have pledged $100,000 or more in support of CHLA’s mission of providing family-centered care, education, research and surgical excellence. The couple also belongs to First Families, a legacy program where donors gift the hospital with $100,000 or more in unrestricted funds. The distinction of contributing to both funds places the Hsiehs as members of CHLA’s Second Century 200 philanthropy group, which promotes ongoing hospital excellence and patient care.

While Mr. and Mrs. Hsieh have had a longstanding relationship with CHLA, they never imagined that they would need the hospital’s care for their child. But in November 2013 while the couple was out of town on business, their seven-year-old son was back home when he fractured his elbow and was taken to a local hospital for care. When the Hsiehs returned to Los Angeles, they brought him to CHLA for review of his case as he was suffering ongoing discomfort. As it happened, their son was demonstrating symptoms of compartmentalization syndrome, in which blood flow becomes restricted to the wounded area. David L. Skaggs, MD, chief of CHLA’s Children’s Orthopaedic Center, performed emergency surgery to prevent permanent loss of function of the boy’s hand and arm.

Ming Hsieh is the co-founder and former Chairman and CEO of Cogent Inc., a manufacturer of automated fingerprint identification systems, where he served until Cogent was sold to 3M in December 2010. He emigrated from China to the United States when he was 24, and has been a leading philanthropist in Los Angeles and around the world. He received both a Bachelor of Science in Electrical Engineering in 1983 and a Master of Science in Electrical Engineering in 1984 from the University of Southern California. In recent years, Mr. Hsieh has generously donated to the university, including the USC Viterbi School of Engineering to endow the USC Department of Electrical Engineering, which was named in his honor. In 2010 a significant gift to the university led to the creation of the USC Ming Hsieh Institute for Research on Engineering-Medicine for Cancer, which bridges research from engineering and medicine to help develop new drugs and other types of therapies to treat cancer.

Through The Hsieh Family Foundation, of which he is chairman, Mr. Hsieh has been a significant donor to many nonprofit institutions including Stanford University, West Virginia University, the Westridge School for Girls, Polytechnic School, the RAND Corporation, and the Chinese Garden at The Huntington Library, among others. Mr. Hsieh has also served on the Board of Trustees at USC and at Fudan University in Shanghai, China, one of the oldest and most selective universities in China.

Children’s Hospital Los Angeles is a not-for-profit pediatric health care organization dedicated to creating hope and building healthier futures for children. Honored as the premier children’s hospital in California and among the top five in the nation, we treat more than 104,000 children annually from Los Angeles and around the world. As a pediatric charity of choice, the hospital relies on the generosity of the community to support its groundbreaking pediatric research and the complex care it provides for critically ill and injured children. For more information, visit www.CHLA.org. Follow us on Twitter, Facebook, YouTube and LinkedIn, or visit our blog: www.WeAreCHLA.org.