Team from Göttingen, Helsinki and New York gets new insights into the evolution of myxomycetes 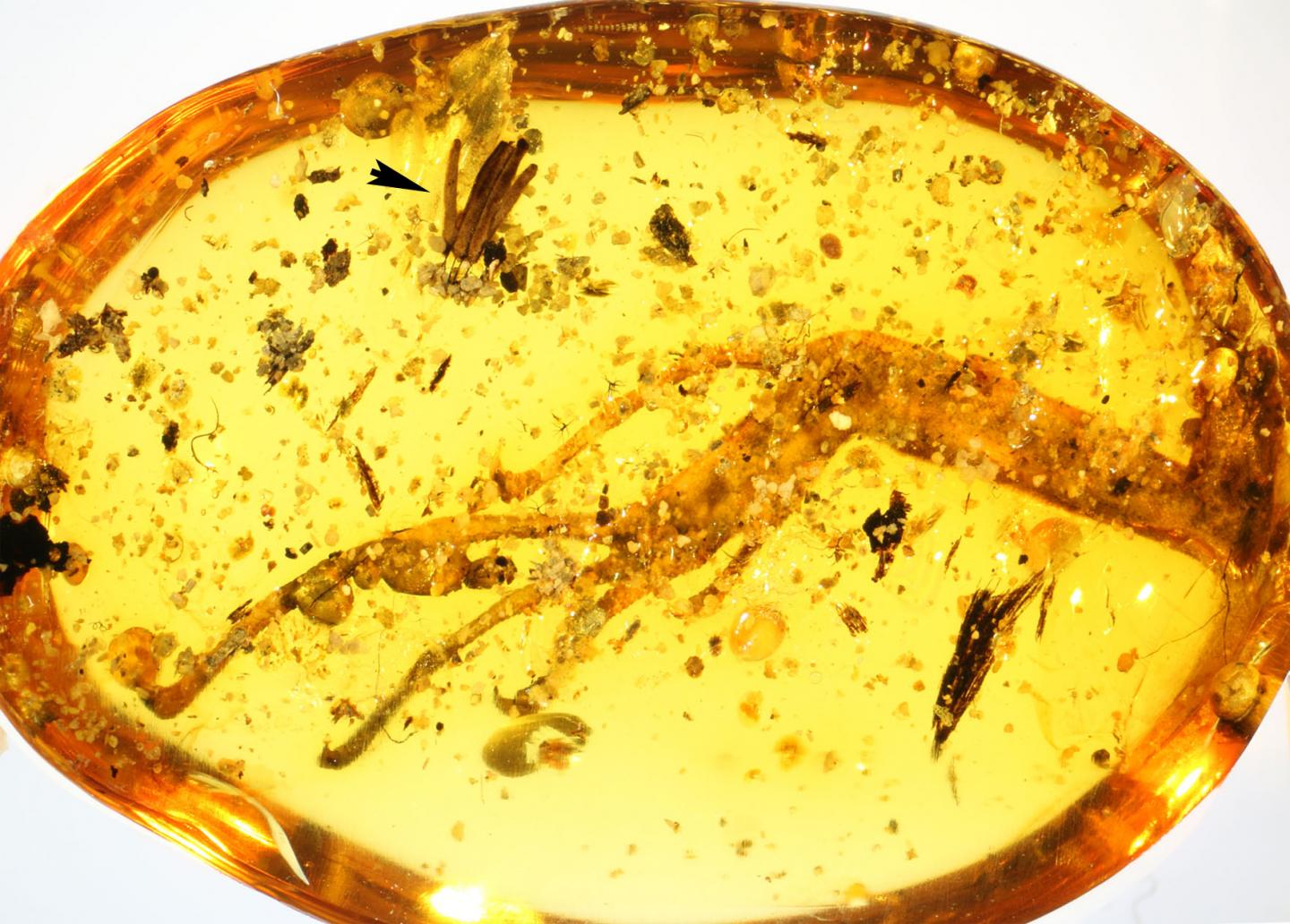 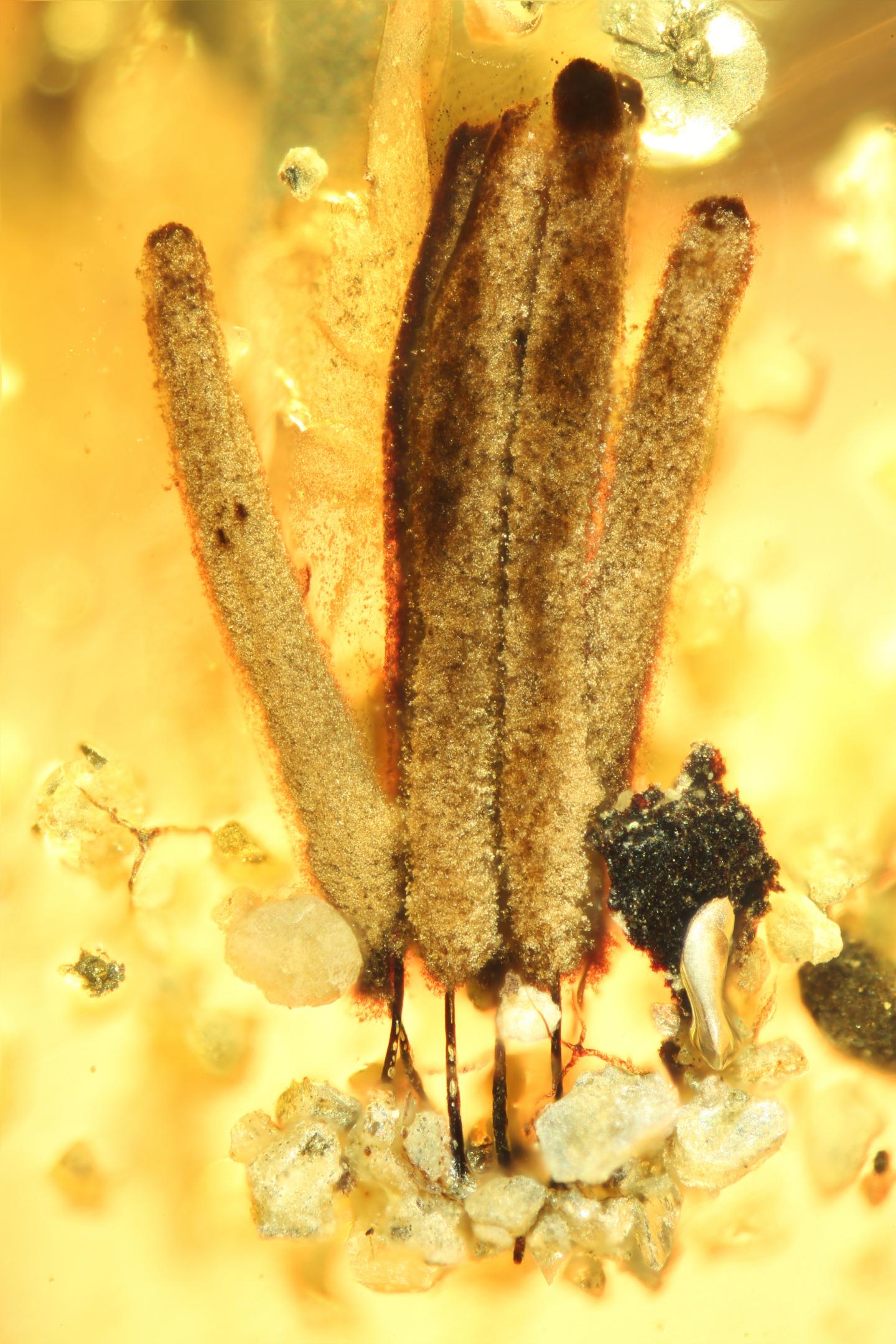 Group of several fruiting bodies of a slime mould (myxomycetes), around 2.5 millimetres long, in amber, which is about 100 million years old, from Myanmar: long-stalked fruiting bodies support the distribution of the spores, then as now.

Newswise — Most people associate the idea of creatures trapped in amber with insects or spiders, which are preserved lifelike in fossil tree resin. An international research team of palaeontologists and biologists from the Universities of Göttingen and Helsinki, and the American Museum of Natural History in New York has now discovered the oldest slime mould identified to date. The fossil is about 100 million years old and is exquisitely preserved in amber from Myanmar. The results have been published in the journal Scientific Reports.

Slime moulds, also called myxomycetes, belong to a group known as 'Amoebozoa'. These are microscopic organisms that live most of the time as single mobile cells hidden in the soil or in rotting wood, where they eat bacteria. However, they can join together to form complex, beautiful and delicate fruiting bodies, which serve to make and spread spores.

Since fossil slime moulds are extremely rare, studying their evolutionary history has been very difficult. So far, there have only been two confirmed reports of fossils of fruiting bodies and these are just 35 to 40 million years old. The discovery of fossil myxomycetes is very unlikely because their fruiting bodies are extremely short-lived. The researchers are therefore astounded by the chain of events that must have led to the preservation of this newly identified fossil. "The fragile fruiting bodies were most likely torn from the tree bark by a lizard, which was also caught in the sticky tree resin, and finally embedded in it together with the reptile," says Professor Jouko Rikkinen from the University of Helsinki. The lizard detached the fruiting bodies at a relatively early stage when the spores had not yet been released, which now reveals valuable information about the evolutionary history of these fascinating organisms.

The researchers were surprised by the discovery that the slime mould can easily be assigned to a genus still living today. "The fossil provides unique insights into the longevity of the ecological adaptations of myxomycetes," explains palaeontologist Professor Alexander Schmidt from the University of Göttingen, lead author of the study.

"We interpret this as evidence of strong environmental selection. It seems that slime moulds that spread very small spores using the wind had an advantage," says Rikkinen. The ability of slime moulds to develop long-lasting resting stages in their life cycle, which can last for years, probably also contributes to the remarkable similarity of the fossil to its closest present-day relatives.

Original publication: Rikkinen, J., Grimaldi, D. A. & Schmidt, A. R.. Morphological stasis in the first myxomycete from the Mesozoic, and the likely role of cryptobiosis. Scientific Reports (2019). http://www.nature.com/articles/s41598-019-55622-9

Caption: Group of several fruiting bodies of a slime mould (myxomycetes), around 2.5 millimetres long, in amber, which is about 100 million years old, from Myanmar: long-stalked fruiting bodies support the distribution of the spores, then as now.