Penn State is matching the A. James & Alice B. Clark Foundation investment with $10 million to bolster programming for high-achieving engineering students 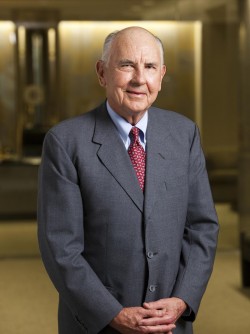 The late A. James Clark established the A. James & Alice B. Clark Foundation, which has committed $15.5 million to support high-achieving engineering students with significant financial need in the Penn State College of Engineering.

The foundation’s investment will be combined with $10 million from Penn State to create an endowment for the new program. This is the largest University match to a private philanthropic gift in Penn State’s history.

“Providing excellent educational opportunities and keeping those opportunities accessible to students of any financial background are two of Penn State’s most important strategic priorities,” Barron said. “This powerful partnership with the Clark Foundation will help us to achieve both of these goals, and it will allow us to create life-changing experiences for talented engineering students who might not otherwise be able to afford a first-rate college education.”

The college will select 10 Clark Scholars each year, for a total cohort of 40. The scholars, whose primary barrier to higher education is funding, will be selected on academic merit, extracurricular leadership and demonstrated commitment to civic improvement.

As the Clark Foundation’s signature initiative in engineering education, the Clark Scholars Program is currently established at 10 U.S. universities, including Johns Hopkins University, the University of Pennsylvania and Virginia Tech.

The program represents the values of the late A. James Clark, who built Maryland-based Clark Construction Group into one of the nation’s largest construction companies and established the Clark Foundation to enact his philanthropic vision of investing in people. Through these investments, the Clark Foundation supports a range of educational and community initiatives, especially those that build practical and immediate connections between effort and opportunity.

“We chose to partner with Penn State because of their powerhouse engineering program, but also because of where they want to go — the Open Doors imperative of the ‘Greater Penn State’ campaign closely aligns with the Foundation and Mr. Clark’s beliefs that one’s financial status should not determine one’s path in life,” said Joe Del Guercio, president and CEO of the Clark Foundation.

“I know how passionate Mr. Clark was about fostering excellence in engineering education and in making sure that great students have access to great opportunities, regardless of their financial means,” said Nicholas P. Jones, executive vice president and provost of Penn State. Jones met Clark at Johns Hopkins University, where Jones held a deanship endowed by Clark. “I am both proud and honored that Penn State will have a hand in carrying forward his powerful legacy.”

“With these new resources provided by the Clark Foundation and the University match, we can provide more financial and programmatic support to help students from underrepresented populations succeed at Penn State,” said Justin Schwartz, Harold and Inge Marcus Dean of Engineering. “At the same time, we can build a more diversified talent pool for our industry and government partners and academic institutions that recruit heavily from Penn State.”

Penn State’s Clark Scholars Program will be a multifaceted initiative that provides both financial and curricular support, allowing students to focus on their education without taking on loans or outside work commitments that do not align with their academic pursuits. In addition to the standard academic and experiential offerings available to every engineering student, the Clark Scholars will also participate in summer bridge programs, a cohort-based global experience, a shared residential experience and shared community service projects.

“This program is designed so that Clark Scholars receive much more than an outstanding engineering education,” said Tonya Peeples, associate dean for equity and inclusion and chair of the Clark Scholars Program steering committee. “They will also touch communities beyond the University through outreach and service projects, and they will develop a worldview that is global in scope, entrepreneurial in nature and always conscious of social and environmental issues. We want to prepare them to really make an impact after graduation, to take on roles as socially responsible innovators and leaders in the industries in which they pursue their careers.”

“While this investment in Penn State is an exciting development for the Clark Foundation, we are most looking forward to meeting the students that will soon arrive on campus,” said Board Chair Courtney Clark Pastrick. “Their promise, their ideas, their commitment to improving their communities and solving problems — they are my father’s legacy.”

The first class of Clark Scholars is currently being selected. The inaugural cohort is scheduled to begin bridge programming this summer and regular classes in fall 2020. Because the funding from both the Clark Foundation and Penn State is endowed, it will continue to support the program in perpetuity. To learn more about the program and how to apply, visit the Penn State Clark Scholars Program website.

The investment from the Clark Foundation will advance “A Greater Penn State for 21st Century Excellence,” a focused campaign that seeks to elevate Penn State’s position as a leading public university in a world defined by rapid change and global connections. With the support of alumni and friends, “A Greater Penn State” seeks to fulfill the three key imperatives of a 21st century public university: keeping the doors to higher education open to hard-working students regardless of financial well-being; creating transformative experiences that go beyond the classroom; and impacting the world by fueling discovery, innovation and entrepreneurship. To learn more about “A Greater Penn State for 21st Century Excellence,” visit greaterpennstate.psu.edu.