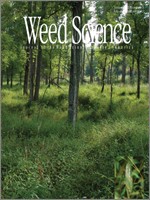 Newswise — –Even as crops resistant to 2,4-D herbicide are being developed, populations of weeds are also developing a resistance. A 2,4-D–resistant variety of the waterhemp weed has been found, and its spread could lessen the impact of an herbicide widely used in grassland and crop production. Despite worldwide use of 2,4-D since the 1940s, only 17 weeds were previously known to be resistant to it.

The journal Weed Science reports the discovery of 2,4-D–resistant waterhemp by a grower in Nebraska. Although scarce 30 years ago, waterhemp is now a major problem for crop production in the midwestern United States. This is the sixth mechanism-of-action herbicide group to which waterhemp has developed resistance.

After 10 years of treatment with 2,4-D, waterhemp was no longer effectively controlled in a Nebraska native-grass seed production field. The highest doses of 2,4-D that were used in an on-site field study, 33 lb ai/A, were insufficient to control 50 percent of the waterhemp population.

Researchers gathered waterhemp seeds from this field and performed greenhouse testing against a susceptible waterhemp variety. Twenty-eight days after treatment with the herbicide, visual observation and dry weight values showed a 10-fold resistance in the affected sample. Researchers also found a reduced sensitivity to the herbicide dicamba.

Corn, soybeans, and cotton resistant to 2,4-D are under development; some are already under USDA consideration for nonregulated status. While an engineered crop offers easier treatment of weeds, this biotechnology will bring about an increase in the use of the 2,4-D herbicide. The authors warn that this new biotechnology must come with proper stewardship to retain the effectiveness of this herbicide.

Full text of the article, “A Waterhemp (Amaranthus tuberculatus) Population Resistant to 2,4-D,” Weed Science, Vol. 60, No. 3, July-September 2012, is available at http://wssajournals.org/toc/wees/60/3