12-Feb-2014 8:00 AM EST, by Institute for Veterans and Military Families
favorite_border 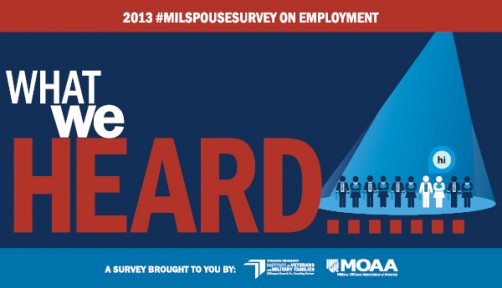 Newswise — Alexandria, Va. (Feb. 12, 2014) — Military Officers Association of America (MOAA) and the Institute for Veterans and Military Families at Syracuse University (IVMF) announce the results of a national study focused on military spouse employment. The presentation will be made at MOAA’s Military Spouse Symposium in San Antonio, Feb. 12, hosted in partnership with JPMorgan Chase & Co.

A major finding was 90% of responding female spouses of active duty service members report being underemployed, meaning they possess more formal education/experience than needed at their current or most recent position. Additionally, the 2012 American Community Survey (ACS) data show military spouses make an average of 38% less total personal income and are 30% more likely to be unemployed than civilian counterparts.

“This critical research effort examined the range of economic impacts facing military spouses as a result of Permanent Change of Station (PCS) moves, licensure constraints, and lack of career enhancing opportunities which come as a result of their spouse’s service,” said IVMF Director of Research, Rosalinda Maury. “Through this project and our partnership with MOAA, we hope that this work will inform the national discussion, helping to create new programs, policies and initiatives that provide resources which will help this community to overcome challenges they face in the pursuit of economic empowerment. The results of this study demonstrate that these challenges are significant and pervasive.”

While ACS data consistently show noticeable gaps in income and unemployment between armed forces spouses and their civilian counterparts, this survey discovered there is not a lack of desire to work that is causing these gaps; over 55% of respondents indicated they “need” to work, while 90% indicated they “want” to work. However, active duty military spouses are more likely to have moved within states, across states, and abroad, compared to their civilian and veteran counterparts. The increased likelihood of moving from one geographic location to another further compounds economic issues for these families. According to survey results, other factors affecting their unemployment or underemployment include relocating to geographic locations with limited employment opportunities, employer perceptions of military spouses, inability to match skills and education to jobs, inflexible work schedules and high childcare costs.

• Over 50% of respondents indicated their chosen career field requires licensing or certification and 73% requires renewal/reissuing after a PCS move, costing an average of $223.03.

• Income significantly differs based on educational attainment and whether the military spouse is working in their preferred career field.

These and other findings, including recommendations to address the issues of military spouse employment are detailed in a summary report entitled, “The 2013 Military Spouse Employment Report”. Infographic highlights of the report findings can be found here.

“MOAA is very honored to be able to present statistically reliable and informative data about military spouse employment that will help provide the basis for future decision and policy making regarding the well-being of military families,” MOAA President Vice Adm. Norb Ryan said

About MOAA:Military Officers Association of America (MOAA) is the nation’s largest officers association with more than 380,000 members from every branch of service, including active duty, retired, National Guard, Reserve, and former officers and their families and survivors. MOAA is a nonprofit and politically nonpartisan organization and an influential force in promoting a strong national defense. MOAA represents the interests of service members and their families in every stage of their lives and careers, and for those who are not eligible to join MOAA, Voices for America’s Troops is a nonprofit MOAA affiliate that supports a strong national defense. For more information, visit www.moaa.org or www.voicesfortroops.org.

Members of the news media who wish to be added to our media distribution list for MOAA news releases, please contact [email protected]. Visit MOAA’s Multimedia & Press Room at http://www.moaa.org/media/default.htm.

About The Institute for Veterans and Military Families at Syracuse University (IVMF):The IVMF is the first interdisciplinary national institute in higher education focused on the social, economic, education and policy issues impacting veterans and their families post-service. Through our focus on veteran-facing programming, research and policy, employment and employer support, and community engagement, the institute provides in-depth analysis of the challenges facing the veteran community, captures best practices and serves as a forum to facilitate new partnerships and strong relationships between the individuals and organizations committed to making a difference for veterans and military families. Learn more about the IVMF at vets.syr.edu.

Military Health In the Workplace