2016 Was a Record Year for Organ Transplants 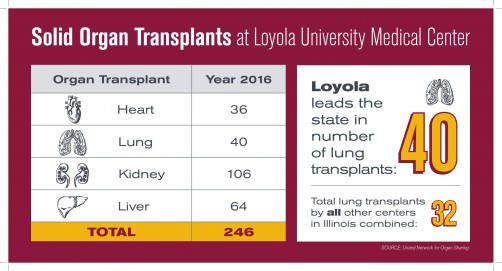 Organ transplants nationally and in Illinois also experienced a record year in 2016. In Illinois, Loyola accounted for a large share of the state's increase. “The growth of our life-saving organ transplant program aligns with our triple aim of providing better health, better care and lower costs,” said Larry Goldberg, Loyola Medicine president and CEO. “We are proud of what we accomplished in 2016 and we will continue to put patients at the center of all we do.”