18-Oct-2018 11:05 AM EDT, by National Institute of Biomedical Imaging and Bioengineering more news from this source
University of Minnesota. McAlpine Research Group. 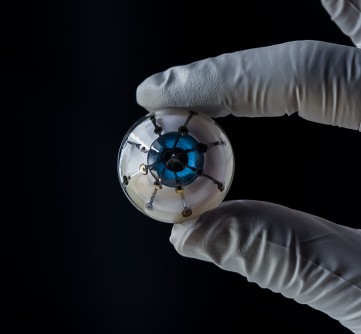 Newswise — Vision is an elegant fusion of physics and biology, where light reflected off objects is focused on the retina at the rear interior of the eye. There, photoreceptors translate the light into electrical signals, which are sensed by the optic nerve and interpreted by the brain. In humans, as with other vertebrates, vision has evolved into a highly precise system with little tolerance for injury. Damage to the retina can lead to degradation of vision quality or loss of sight.

Researchers at the University of Minnesota, with support from the National Institute of Biomedical Imaging and Bioengineering (NIBIB), have added reversing visual impairment to a variety of projects that involve 3-D bioprinting for regenerating function. Through the combination of design innovation and the use of materials—including synthetic conducting polymers, functional electronics, and biological tissue—the team is creating prototypes of multiple replacement body parts, including skin, ears, spinal cord, and now a bionic eye.

The researcher team is led by Michael C. McAlpine, the Benjamin Mayhugh Associate Professor of Mechanical Engineering. In 2017, the United States Government honored him with a Presidential Early Career Award for Scientists and Engineers (PECASE), the highest federal award for science and engineering professionals in the early stages of their independent research careers.

To advance the concept of a bionic eye, the team concentrated their research on the configuration and function of photoreceptors that sense the incoming light and efficiently translate it into an electronic signal. In their article in the Aug. 28, 2018, Advanced Materials, the team reported success in directly printing layers of photosensitive material in a hemispherical array configuration that achieved high performance in detecting light.

“We were able to demonstrate a fully 3-D printed hemispherical eye, which can image projections, setting the stage for 3D printed bionic replacement eyes,” McAlpine said. “Moreover, the performance of these devices is high. This work was inspired by my mother, who is blind in one eye and asked me to 3-D print a bionic eye for her.”

The team is the first to design and fully 3-D print polymer photodetectors, and even do so on a half-circle array. They printed the photodetectors on a curved glass dome. This required tuning the concentration of inks that comprise the functioning layers of photodetectors to attach without dripping. They could apply photodetector material to a uniform thickness to obtain good photodetection quality.

“The prototype for a bionic eye is a compelling integration of sensors with biological applications,” said Seila Selimovic, Director of the NIBIB programs in Tissue Chips, Biosensors, and Microfluidic Bioanalytical Systems.

The 3-D printing on the curved surface is performed using a custom-built 3-D printer. It required just four printing steps and takes about an hour. The process begins with a base ink of silver particles. The dispensed ink stayed in place and dried uniformly instead of running down the curved surface. The researchers then used semiconducting polymer materials to print photodiodes, which convert light into electricity.

The researchers next plan to create a prototype with more light receptors that are even more efficient. They’d also like to find a way to print on a soft hemispherical material that can be implanted into a real eye.

The research was funded in part through an NIH Director’s Pioneer award administered by NIBIB (EB020537).