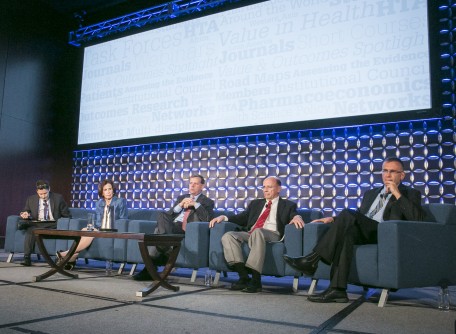 Newswise — Boston, MA—May 22, 2017—The International Society for Pharmacoeconomics and Outcomes Research (ISPOR) opened its 22nd Annual International Meeting in Boston, MA, USA this morning with its first plenary session, Where Is US Health Policy Going?

The moderator, Peter J. Neumann, ScD, led a lively discussion that addressed key health policy issues, such as the future health insurance in the United States in light of the legislative efforts to repeal the Affordable Care Act (ACA), the growing concern about drug pricing and trends in health spending, and the challenges of implementing payment and delivery reforms. The following excerpts reflect the panelists’ greatest concerns about the future direction of health care in the United States and what this might mean for patients, payers, and policy makers.

Joseph R. Antos, PhD noted that while the promise of health care reform is to decrease costs and increase choices, he expressed concern that the system may be actually moving toward offering patients fewer choices. While Dr. Antos acknowledged that it is difficult to define what Republicans envision as an ideal possible replacement for the ACA, he believes that any replacement should not “toss poor people off to the side.” Recognizing that institutions change slowly, Dr. Antos does not see employer-based insurance in the United States changing overnight; however, he believes that employer-based coverage is part of a larger problem within the US health care system.

David M. Cutler, PhD felt that the focus on health care efficiencies seems to be stalled and that the United States is moving backward not forward. He noted that some “backlash is brewing” due to consumers’ frustration with the high cost health care. As a result, Dr. Cutler sees growing support for a single-payer system and envisions the United States moving more toward a British model with broad health care coverage provided through a public program, where those who can afford it are likely to “buy out” of the public program and opt for more comprehensive coverage through a different plan.

Jonathan Gruber, PhD believed there is a possibility that the ACA actually might be repealed. Dr. Gruber sees innovation in the private sector continuing, but notes that public research and development has decreased significantly, with the United States spending $200 million less than it did 30 years ago. He also spoke about the proliferation of “narrow networks” (i.e., plans with a limited network of providers) to help control health care costs, noting that he has seen no evidence that suggests these plans lead to worse health outcomes.

Gail R. Wilensky, PhD worries most about losing the recent gains made in the increased number of insured Americans, noting that having insurance coverage is important not only to individual patients, but to entire communities. During a discussion on the single payer option, she stressed that in the United States, Medicaid (not Medicare) would likely be the “single payer.” Dr. Wilensky noted that the focus should be on the value we obtain from health care instead of the emphasis on health care’s percentage of gross domestic product. She also reinforced the need to make it easier for consumers to make good health care decisions.