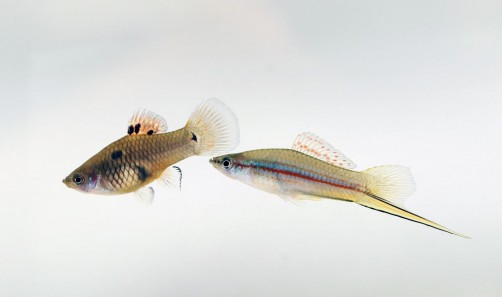 This is Xiphophorus maculatus hellerii.

Newswise — On 3 December 2018, the laboratory of Professor Axel Meyer, University of Konstanz published new findings of an experimental evolutionary project that ran for 30 years on the genomic mechanisms of sex determination in swordtail fish in the journal "Nature Communications". Dr Paolo Franchini, evolutionary biologist and Junior Research Group Leader at the University of Konstanz is the lead author of this collaboration with the laboratory of Professor Manfred Schartl of the University of Würzburg

The diversity of sex determination systems is remarkably diverse among fishes compared to mammals that all have a stereotypic XX, XY sex-chromosomal mechanism to determine sex. Why and how the genomic mechanisms and the evolutionary causes behind such diversity in sex determination in fish are so variable remained unknown. Evolutionary biologist Dr Paolo Franchini with his collaborators has now been able to describe such a mechanism and its exact function in this study entitled "Long-term experimental hybridisation results in the evolution of a new sex chromosome in swordtail fish".

Professor Manfred Schartl, Head of the Department for Physiological Chemistry at the Biocenter of the University of Würzburg, initiated this experiment that included hybridisation with backcrossing by two Xiphophorus fish species with different sex chromosome systems three decades ago. Hybrid origins of species, the result of the crossing of two genetically different species, are found frequently in fish populations. "What we know from the study of these systems in natural habitats is that hybridisation is a crucial mechanism for the evolution of new species", explains Paolo Franchini. In the experiment the researchers could study the effects of hybridisation on the genomic mechanism of sex-determination. Determining the sex of these fish is easy: as its name suggests, the male swordtail fish has a sword-like elongated caudal fin; the female, on the other hand, is rounder and fuller and does not have a swordtail. In this long-term laboratory study the effects of hybridisation that is thought to have resulted in at least two swordtail species in nature on the genome and the mechanisms that determine sex could be studied in detail.

In an experimental design that makes it possible to track crossings of more than 100 generations over more than 30 years, a female Xiphophorus maculatus was crossed repeatedly with a male Xiphophorus hellerii. These two species have different sex chromosome systems. In further steps, the new hybrid fish originating from the cross was backcrossed again with the male species, and this design was repeated for more than 100 generations. Paolo Franchini explains further: "We found out that introgression - the movement of genetic material from one species to another - and the selection of pigmentation phenotypes results in the retention of an unexpectedly large maternally derived genomic region." During the hybridisation process, the sex-determining region on the X chromosome of one parent was transferred to an autosome of the hybrid fish. This transfer led to the evolution of a completely new sex chromosome. "Our results show above all the complexity of factors that contribute to patterns observed in hybrid genomes including such fundamental issues such as sex determination", summarises Paolo Franchini. The work proves that hybridisation can catalyse the rapid evolution of a new sex chromosome and thus makes an essential contribution to an experiment launched more than 30 years ago.

- Evolutionary experiment ran for over 30 years and resulted in a novel genomic sex determination mechanism.

- Results show that hybridisation can influence the rapid evolution of a new sex chromosome.