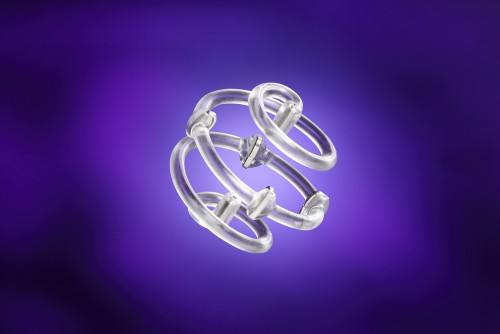 Noted radiation oncologist Robert Kuske, M.D. said the unique BioZorb marker better addressed the longstanding challenge of identifying the tumor bed for radiotherapy after breast conservation therapy. The device was reported to provide a better alternative to traditional methods for targeting the surgical site, such as clips, seroma formation, and anatomic landmarks.

“The BioZorb marker is like a beacon for the radiation oncologist,” Kuske said. “It stays put and clearly marks where the surgeon has been."

There were no complications in the group of 20 patients, and cosmetic and functional outcomes were described as “excellent.” Dr. Kuske and his physics team noted significant improvement in their ability to delineate the target volume using the 3D marker.

The ABS Annual Meeting, at which this data was presented, was held in San Diego on April 3-5, 2014.

Prior to the advent of BioZorb, there was no standardized method for marking the surgical site of tumor removal, which made post-operative radiation planning difficult. Methods typically used for radiation planning may overestimate the volume of the treatment area, and may result in excess radiation exposure to normal tissues such as the heart and lungs, causing inadvertent complications.

The marker’s unique open-spiral design incorporates six permanent titanium clips in a fixed 3D array and provides specific landmarks at the site of the excised tumor. The marker is useful for radiation treatment planning, patient positioning, and is compatible with advanced radiation treatment techniques.

The BioZorb device has been used successfully in both the U.S. and New Zealand. It is made of a bioabsorbable material commonly used in other medical devices, and allows the patient’s body to absorb the material slowly so it does not require surgical removal after treatments are completed.

BioZorb has received 510(k) clearance from the U.S. Food and Drug Administration. The device is available in a range of sizes to accommodate a variety of clinical situations.

Focal Therapeutics is a medical device company based in Portola Valley, Calif. The company developed and manufactures the BioZorb tissue marker, a proprietary bioabsorbable device that provides radiographic marking of soft tissue sites. The BioZorb device is placed at the time of surgical removal of tissue, such as during breast surgery, and the device’s three-dimensional array of marker elements has unique clinical utility for patient imaging. For more information, call (U.S.) 650-530-2394 or email [email protected].