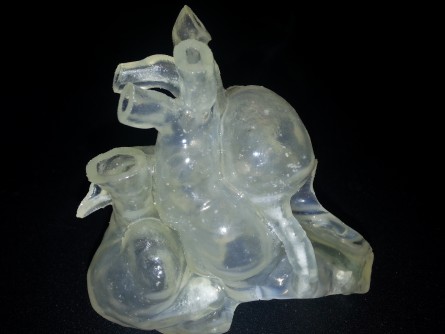 Newswise — Three-dimensional printing technology can make surgery safer for children with congenital heart disease and reduce the duration as well as the number of invasive procedures required. Richard Kim, MD, a cardiac surgeon at Children’s Hospital Los Angeles, recently used a 3D printed heart as a model to plan a life-saving procedure for his young patient, Esther Perez. The child was born with a rare, life-threatening cardiac defect.

Esther had a ventricular septal defect, a fairly common congenital anomaly. However, her particular defect was unusual and would require complex surgery to repair it. Her intra-cardiac anatomy required complex re-routing of the blood supply, a procedure only performed at a handful of other pediatric hospitals nationwide.

Typically, surgeons are not able to determine their approach until they open the chest, put the child on a heart bypass machine, survey the problem and then, make a quick decision on how to proceed with repair. Since the variation in normal anatomy is increased in hearts with congenital abnormalities, an exact replica – a three dimensional roadmap -- allows surgeons to strategize before entering the operating room.

“Instead of opening the chest and making a decision about how to proceed, I could immediately begin fixing the problem,” said Kim, who is also an assistant professor at the Keck School of Medicine of the University of Southern California. “A 3D model allowed me to plan the surgery in advance, which meant Esther spent less time in surgery and received less anesthesia – making the procedure safer.”

Three-dimensional printing technology can create an object of any shape by printing layer upon layer, employing plastics or other materials in place of ink, explained Jon Detterich, MD, a pediatric cardiologist who specializes in noninvasive cardiac imaging. He gathered both 2D and 3D MRI scans then translated the information into a format that could be read by a 3D printer. “As useful as scans are for visualizing structural defects, there’s nothing like holding a life-sized, three-dimensional replica in your hands,” said Detterich, who is also an assistant professor at the Keck School of Medicine of USC.

“So far, only a small number of 3D models have been used for heart surgery, so it’s too soon to tell if they improve surgical outcomes,” said Frank Ing, MD, chief of Cardiology and co-director of the Heart Institute at CHLA. “But our experience suggests that using models saves time in the OR – which means increased safety and decreased costs.” Ing is also a professor at the Keck School of Medicine of USC.

Also, this knowledge will likely translate into a need for fewer surgeries, and allow children – like Esther Perez – to spend less time recuperating in intensive care. Esther, who would have required multiple surgeries during the first years of her life, made a rapid recovery and is expected to look forward to a life free of medical complications.