9-Feb-2015 9:00 AM EST, by National Institute of Biomedical Imaging and Bioengineering
favorite_border 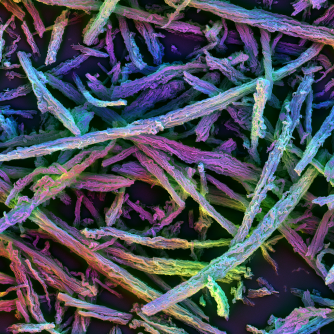 3D vaccine consists of many microsized, porous silica rods that spontaneously assemble into a haystack formation after being injected under the skin. Image taken with polychromatic scanning electron microscope. 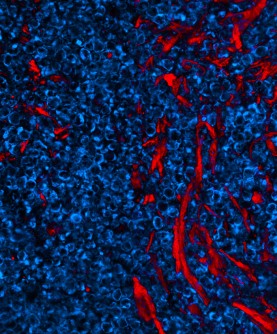 Confocal microscope image of the vaccine scaffold (red) retrieved from a mouse. The scaffold has been infiltrated by dendritic and other immune cells (blue).

Newswise — NIBIB-funded researchers have developed a novel 3D vaccine that could provide a more effective way to harness the immune system to fight cancer as well as infectious diseases. The vaccine spontaneously assembles into a scaffold once injected under the skin and is capable of recruiting, housing, and manipulating immune cells to generate a powerful immune response. The vaccine was recently found to be effective in delaying tumor growth in mice.

“This vaccine is a wonderful example of applying biomaterials to new questions and issues in medicine,” says David Mooney, Ph.D., a professor of bioengineering at Harvard University in the School of Engineering and Applied Sciences, whose lab developed the vaccine. The project was co-led by Jaeyun Kim, Ph.D. and Aileen Li, a doctoral student in the Mooney lab. Their findings were published in the December 8, 2014 issue of Nature Biotechnology. Cancer vaccines

Cancer cells are generally ignored by the immune system. This is because—for the most part—they more closely resemble cells that belong in the body than pathogens, such as bacterial cells or viruses. The goal of cancer vaccines is to provoke the immune system to recognize cancer cells as foreign and attack them.

One way to do this is by manipulating dendritic cells, the coordinators of immune system behavior. Dendritic cells constantly patrol the body, sampling bits of protein found on the surface of cells or viruses called antigens. When a dendritic cell comes in contact with an antigen that it deems foreign, it carries it to the lymph nodes, where it instructs the rest of the immune system to attack anything in the body displaying that antigen.

Though similar to healthy cells, cancer cells often display unique antigens on their surface, which can be exploited to develop cancer immunotherapies. For example, in dendritic cell therapy, white blood cells are removed from a patient’s blood, stimulated in the lab to turn into dendritic cells, and then incubated with an antigen that is specific to a patient’s tumor, along with other compounds to activate and mature the dendritic cells. These “programmed” cells are then injected back into the bloodstream with the hopes that they will travel to the lymph nodes and present the tumor antigen to the rest of the immune system cells.

While this approach has had some clinical success, in most cases, the immune response resulting from dendritic cell vaccines is short-lived and not robust enough to keep tumors at bay over the long run. In addition, cell therapies such as this, which require removing cells from patients and manipulating them in the lab, are costly and not easily regulated. To overcome these limitations, Mooney’s lab has been experimenting with a newer approach that involves reprogramming immune cells from inside the body using implantable biomaterials.

The idea is to introduce a biodegradable scaffold under the skin that temporarily creates an “infection-mimicking microenvironment”, capable of attracting, housing, and reprogramming millions of dendritic cells over a period of several weeks. In a 2009 paper published in Nature Materials, Mooney demonstrated that this could be achieved by loading a porous scaffold—about the size of a dime—with tumor antigen as well as a combination of biological and chemical components meant to attract and activate dendritic cells. Once implanted, the scaffold’s contents slowly diffused outward, recruiting a steady stream of dendritic cells, which temporarily sought residence inside the scaffold while being simultaneously exposed to tumor antigen and activating factors.

When the scaffold was implanted in mice, it achieved a 90% survival rate in animals that otherwise die from cancer within 25 days.

Now, Mooney and his team have taken this approach a step further, creating an injectable scaffold that can spontaneously assemble once inside the body. This second generation vaccine would prevent patients from having to undergo surgery to implant the scaffold and would also make it easier for clinicians to administer it.

The new 3D vaccine is made up of many microsized, porous silica rods dispersed in liquid. When injected under the skin, the liquid quickly diffuses, leaving the rods behind to form a randomly assembled three-dimensional structure resembling a haystack. The spaces in between the rods are large enough to house dendritic cells and other immune cells, and the rods have nano-sized pores that can be loaded with a combination of antigens and drugs.

While the 3D injectable scaffold is being tested in mice as a potential cancer vaccine, any combination of different antigens and drugs could be loaded into the scaffold, meaning it could also be used to treat infectious diseases that may be resistant to conventional treatments.

“The ability to so elegantly harness the natural behavior of dendritic cells to elicit a strong immune response is impressive,” says Jessica Tucker, Program Director of Drug and Gene Delivery Systems and Devices at NIBIB. “The possibility of developing this approach as a cancer vaccine, which would not require an invasive and costly surgery to manipulate immune cells outside of the body, is very exciting.”

Mooney says that in addition to continuing to develop the cancer vaccine, he also plans to explore how the injectable scaffold can be used to both treat and prevent infectious diseases. More broadly, Mooney predicts that spontaneously assembling particles will be adopted by many fields in the future.

“I think this is going to be the first of a number of examples where we utilize ideas of self-organization in the body instead of having to create structures outside of the body and place them in,” says Mooney. “I think that will be broadly applicable, not only in instances like this, but also, for example, in tissue engineering and regenerative medicine where scaffolds are used to facilitate the regrowth of tissues in the body. The ability to assemble a scaffold in the body instead of having to surgically implant it would be a significant advance.”

This research was supported in part by the National Institute of Biomedical Imaging and Bioengineering under award #EB015498. 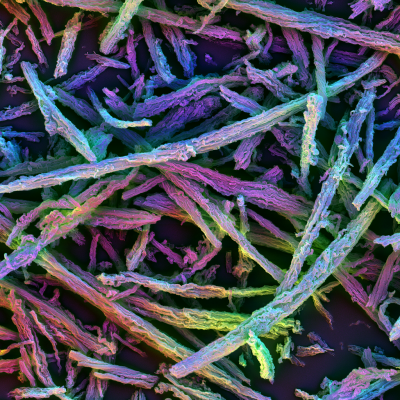 Caption: 3D vaccine consists of many microsized, porous silica rods that spontaneously assemble into a haystack formation after being injected under the skin. Image taken with polychromatic scanning electron microscope. 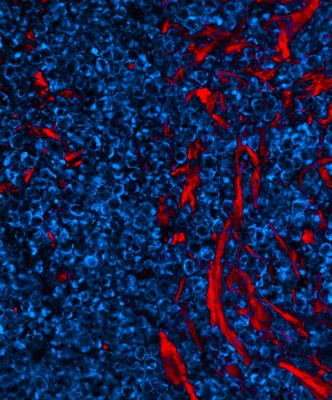 Caption: Confocal microscope image of the vaccine scaffold (red) retrieved from a mouse. The scaffold has been infiltrated by dendritic and other immune cells (blue).