28-Mar-2017 8:05 AM EDT, by Perelman School of Medicine at the University of Pennsylvania contact patient services
favorite_border 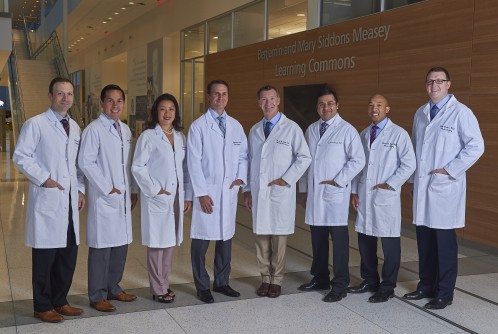 Newswise — PHILADELPHIA – Doctors in Penn Medicine’s Division of Plastic Surgery recently performed their 5,000th free flap reconstructive surgery – in which tissue is taken from another part of the body and used to improve the appearance of a wound or scar. Focusing on breast reconstructions, as well as head and neck surgeries and leg surgeries, Penn has become the largest free flap reconstruction center in the United States by volume. Their milestone will be the focus of a presentation at the 96th Annual American Association of Plastic Surgeons Meeting in Austin, Texas, in which they will educate leaders from other institutions on the process of building a free flap program.

“This achievement really speaks to how much we’ve grown in this area over the last 10 years,” said Joseph Serletti, MD, Chief of Plastic Surgery in the Perelman School of Medicine at the University of Pennsylvania.

Women undergoing a mastectomy are faced with several options for reconstruction, whether they’ve had breast cancer or have decided to undergo the procedure preventatively if they are, for instance, at a high risk of developing the disease due to family history or being carriers of the BRCA gene mutations. The free flap procedure, while a longer and more complex surgery than alternatives, gives patients a more natural appearance and has been shown to help avoid infection. Patients with cancer usually wait until their chemotherapy and/or radiation is completed before undergoing reconstruction, while those who are undergoing mastectomy as a preventive measure may have both surgeries at once.

Before Serletti arrived in 2006, Penn was doing less than 50 free flap procedures each year, and all of them were at the Hospital of the University of Pennsylvania. In 2016, Penn doctors performed more than 700 of these procedures at eight different campuses across the region, including Pennsylvania and Penn Presbyterian Hospitals in Philadelphia, Lancaster General Hospital in Lancaster, Pennsylvania, and clinics in Bryn Mawr, Pennsylvania and Cherry Hill, New Jersey.

“You can’t do all of that without support at all levels, from the leadership at Penn to the faculty and our staff,” Serletti said. “It shows Penn’s commitment to bringing modern, cutting edge procedures to the Delaware Valley.”

That commitment has also allowed Serletti to expand Penn’s team both from a faculty standpoint and on an educational level. Over the last 10 years, Penn has gone from five faculty members in the division of Plastic Surgery to 19, with plans to add two more. No one has left along the way. In that same period, the number of residents and fellows has more than tripled, growing from eight to 25. That includes four times as many residents in microsurgery – the area dealing with free flaps.

The growth among faculty and staff has allowed the team to not only see more patients, but also to do more research. Doctors from the Center for Human Appearance are publishing almost five times as many papers in peer-reviewed journals as they were a decade ago, ensuring that the division is at the forefront of innovation. About 40 percent of those are focused on reconstructive microsurgery.

“Not only is everything we do based in evidence, we’re also constantly tracking our own outcomes to make sure our work is top quality,” Serletti said.

Penn Medicine is one of the world's leading academic medical centers, dedicated to the related missions of medical education, biomedical research, and excellence in patient care. Penn Medicine consists of the Raymond and Ruth Perelman School of Medicine at the University of Pennsylvania (founded in 1765 as the nation's first medical school) and the University of Pennsylvania Health System, which together form a $6.7 billion enterprise.The Perelman School of Medicine has been ranked among the top five medical schools in the United States for the past 20 years, according to U.S. News & World Report's survey of research-oriented medical schools. The School is consistently among the nation's top recipients of funding from the National Institutes of Health, with $392 million awarded in the 2016 fiscal year. The University of Pennsylvania Health System's patient care facilities include: The Hospital of the University of Pennsylvania and Penn Presbyterian Medical Center -- which are recognized as one of the nation's top "Honor Roll" hospitals by U.S. News & World Report -- Chester County Hospital; Lancaster General Health; Penn Wissahickon Hospice; and Pennsylvania Hospital -- the nation's first hospital, founded in 1751. Additional affiliated inpatient care facilities and services throughout the Philadelphia region include Good Shepherd Penn Partners, a partnership between Good Shepherd Rehabilitation Network and Penn Medicine.Penn Medicine is committed to improving lives and health through a variety of community-based programs and activities. In fiscal year 2016, Penn Medicine provided $393 million to benefit our community.