A safe approach to investigating how organic molecules could come about from inorganic compounds.

The Miller-Urey experiment was a pioneering study regarding the abiotic synthesis of organic compounds with possible relevance to the origins of life. Simple gases were introduced into a glass apparatus and subjected to an electric discharge, simulating the effects of lightning in the primordial Earth’s atmosphere-ocean system. The experiment was conducted for one week, after which, the samples collected from it were analyzed for the chemical building blocks of life. 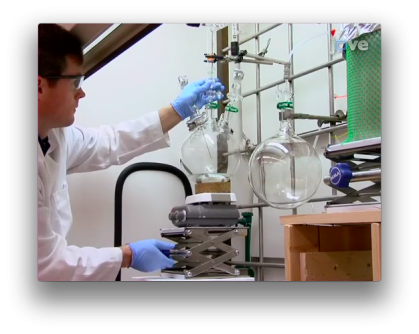 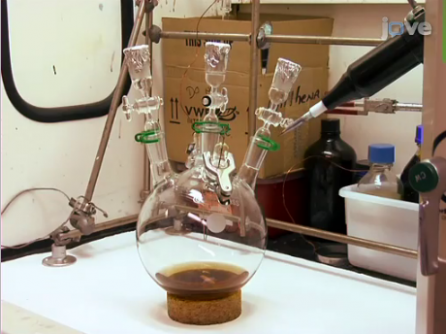 After a week of sparking in a Miller-Urey experiment, the contents within the reactant flask become visibly transformed. Miller-Urey’s groundbreaking work is considered to be the first deliberate, efficient synthesis of biomolecules under simulated primitive Earth conditions.

Newswise — Today, January 21, JoVE, the Journal of Visualized Experiments, published a modern approach to a famed experiment that explored one of the most intriguing research questions facing scientists today—the origin of life on earth.

The protocol, titled Conducting Miller-Urey Experiments, is comprised of a modern and simplified approach to the method used by Dr. Stanley Miller and Dr. Harold Urey in 1953. Their research evaluated the possibility of organic compounds important for the origin of life to have been formed abiologically on early Earth.

“The results of this study showed that amino acids, the building blocks of life, could be formed under primitive Earth conditions,” said Eric Parker of the original Miller-Urey Experiments. Parker is one of the researchers behind the simplified procedure, which he and his team developed at the Georgia Institute of Technology. Scientists from NASA—one of whom, Jeffrey Bada, was once a student of Dr. Miller’s—and the Tokyo Institute of Technology were also involved.

“Miller was hesitant to encourage people to repeat the experiment due to the risk of inducing an explosion,” said Parker, explaining why his lab chose to publish their version of the experiment in JoVE’s signature step-by-step video format. “Often times, after reading a methods description it may not be fully clear how a certain research task was carried out,” he said, “...Therefore, this article was written to inform interested researchers how to conduct the experiment safely, in part, by giving precise instructions on evacuating [ignitable gasses like oxygen, methane and hydrogen from] the reaction apparatus before initiating the spark.”

Despite these dangers, Parker said, there remains much interest among scientists to recreate the Miller-Urey experiment and to perform variations of it for testing new research ideas. He and his colleagues are preparing to publish a second article comparing their novel spark-discharge experimental results to original samples from the 1958 Miller-Urey cyanamide spark-discharge study that followed the landmark paper.

In the meantime, Parker and his colleagues hope that their JoVE video will encourage more research with Miller-Urey type experiments. Such efforts could help answer key questions in the origin of life field, such as which prebiotic conditions may have facilitated the synthesis of specific organic compounds believed to be important for life, Parker said.

***About JoVE, the Journal of Visualized Experiments:JoVE, the Journal of Visualized Experiments, is the first and only PubMed/MEDLINE-indexed, peer-reviewed journal devoted to publishing scientific research in a video format. Using an international network of videographers, JoVE films and edits videos of researchers performing new experimental techniques at top universities, allowing students and scientists to learn them much more quickly. JoVE has published video-protocols from an international community of nearly 8,000 authors in the fields of biology, medicine, chemistry, and physics. 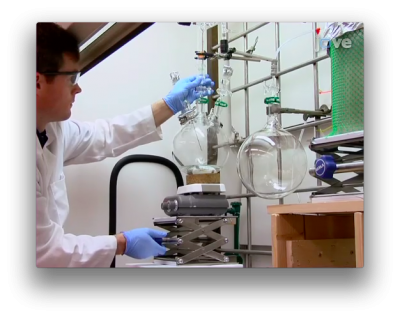 Caption: Miller-Urey experiments study the abiotic synthesis of organic compounds creating an environment similar to that of the early earth. An electric discharge is applied to a mixture of gases representing the early earth’s atmosphere and lightening. This is done in the presence of a liquid water reservoir, representing the early oceans, as well as with an apparatus simulating evaporation and precipitation. 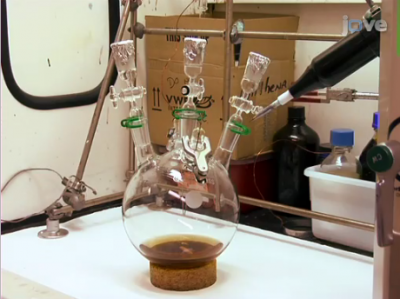 Caption: After a week of sparking in a Miller-Urey experiment, the contents within the reactant flask become visibly transformed. Miller-Urey’s groundbreaking work is considered to be the first deliberate, efficient synthesis of biomolecules under simulated primitive Earth conditions.