A Better Bedbug Trap: Made From Household Items for About $1

20-May-2014 12:00 PM EDT, by University of Florida Institute of Food and Agricultural Sciences
favorite_border 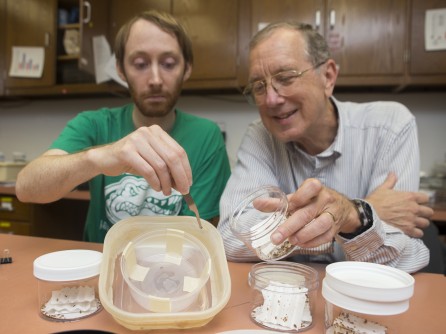 Benjamin Hottel, a University of Florida doctoral student in entomology, left, and Phil Koehler, an urban entomology professor, demonstrate how to build a do-it-yourself bedbug trap. They created a method for building an inexpensive trap to help those who cannot afford professional pest control help. UF/IFAS photo/Marisol Amador 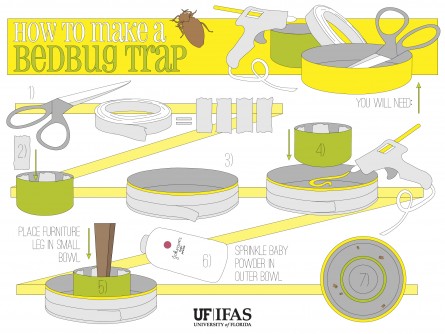 This graphic illustrates you how to make a bedbug trap.

Newswise — GAINESVILLE, Fla. --- The contraption seems so simple, yet so clever, like something The Professor might have concocted on “Gilligan’s Island.”

Researchers at the University of Florida’s Institute of Food and Agricultural Sciences have devised a bedbug trap that can be built with household items. All you need are two disposable plastic containers, masking tape and glue, said Phil Koehler, UF/IFAS urban entomology professor. The traps catch and collect the bugs when they try to travel between people and the places where bedbugs hide, he said.

“This concept of trapping works for places where people sleep and need to be protected at those locations,” Koehler said.

The traps rely on the bugs’ poor ability to climb on smooth surfaces, he said. Instead, the traps have rough areas to let bedbugs enter easily, and a smooth-surfaced moat that keeps them from escaping.

The traps work best if you apply talc, including baby powder, to the space between the small and large container walls to make it harder for the bugs to escape. Many people use incorrect methods to treat bedbugs. Koehler advises against using flammable liquids, mothballs, treating mattresses with pesticides and using bug bombs.

Koehler said the bedbug device is pretty foolproof and effective.

“It’s really hard to mess this up to the point that you’d hurt anything,” he said.

The trap is a stunningly easy solution for a vexing national problem.

An April 2013 survey by the National Pest Management Association showed that nearly every pest management professional, 99.6 percent, had encountered a bedbug infestation during the prior 12 months. Nearly half, 49 percent, said infestations occur mostly in the summer. Because more people tend to travel and relocate during the summer, it’s possible more of them unknowingly bring bugs home or discover them soon after moving, according to the pest management group.

Entomologists say bedbugs are becoming more resistant to pesticides, exacerbating what is also an expensive problem.

Bedbug treatments can run $3,000 for a single-family home or $1,200 for a low-income apartment – something many can ill-afford.

So Koehler and his colleagues created their trap from about $1 worth of household items. The number of traps needed for any given dwelling depends on the number of places people sleep. Researchers estimate one would need about 50 traps for a typical three-bedroom home, enough to place one under each leg of furniture, including chairs, sofas and beds.

The bedbug trap is the brainchild of Koehler; Benjamin Hottel, an entomology doctoral student; Rebecca Baldwin, assistant urban entomology professor; and Roberto Pereira, an associate research scientist in the UF entomology and nematology department. Their Extension paper on the subject can be found at http://edis.ifas.ufl.edu/in1022.

Look for a UF/IFAS video on the bedbug trap at http://bit.ly/1vfXPrL. 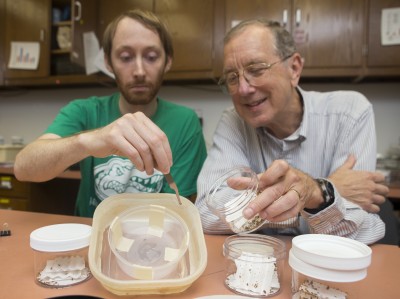 Caption: Benjamin Hottel, a University of Florida doctoral student in entomology, left, and Phil Koehler, an urban entomology professor, demonstrate how to build a do-it-yourself bedbug trap. They created a method for building an inexpensive trap to help those who cannot afford professional pest control help. UF/IFAS photo/Marisol Amador 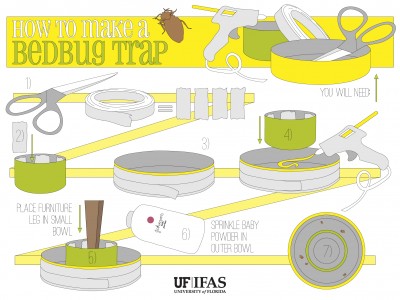 Caption: This graphic illustrates you how to make a bedbug trap.