A Breakthrough in Our Understanding of How Things Deform 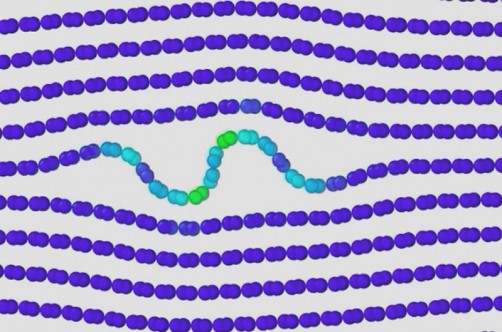 Researchers at Drexel University have observed a new type of structural deformation mechanism in bulk materials, called ripplocation. It occurs when atomic layers inside the material ripple and buckle when the material is compressed. 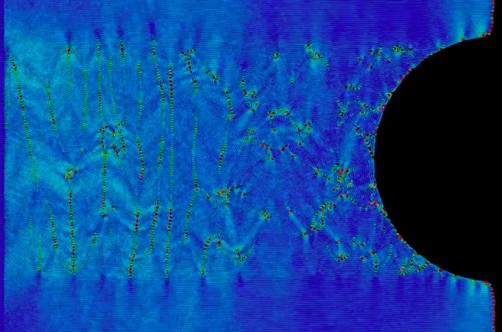 When a layered material like graphite receives an edge-on force it can elastically recover its shape because the force is dissipated through ripplocation of its internal atomic layers.

Newswise — Every material can bend and break. Through nearly a century’s worth of research, scientists have had a pretty good understanding of how and why. But, according to new findings from Drexel University materials science and engineering researchers, our understanding of how layered materials succumb to stresses and strains was lacking. The report suggests that, when compressed, layered materials — everything from sedimentary rocks, to beyond-whisker-thin graphite — will form a series of internal buckles, or ripples, as they deform.

The finding was published in the journal Scientific Reports by a team of researchers from Drexel’s College of Engineering, led by Michel W. Barsoum, PhD, distinguished professor and head of the MAX/MXene Research Group, along with Garritt J. Tucker, PhD, an assistant professor, and Mitra Taheri, PhD, Hoeganaes associate professor, all in the Department of Materials Science and Engineering.

“Dislocation theory – in which the operative deformation micromechanism is a defect known as a dislocation – is very well established and has been spectacularly successful in our understanding the deformation of metals,” Tucker said. “But it never really accurately accounted for the rippling and kink band formation observed in most layered solids.”

Barsoum had observed the latter phenomena during his studies of layered materials such as the MAX phases, mica and graphite. So when a paper published, in early 2015, by a group at the Massachusetts Institute of Technology suggested a new deformation micromechanism — best described as an atomic scale ripple — occurring near the surface of layered materials, he realized that the defect, dubbed a “ripplocation,” had much broader implications.

“The MIT work showed that while the end result of the motion of dislocations and ripplocations is the same: one atomic layer moves relative to another, their physics were distinctly different and were thus totally and fundamentally different entities,” Barsoum said.

According to dislocation theory, when the planes of layered solid materials are loaded and unloaded edge-on they will either bounce back, and return to their original form — if it’s an elastic material — or it will be permanently indented.

Ripplocation behavior explains the third observed option, which is the material returning to its original form while dissipating considerable amounts of energy.

The latter effect was labeled “kinking nonlinear elasticity” by Barsoum about a decade ago, because it involved the formation of kink bands — permanent buckles in the layers. When ripplocation was suggested, everything fell into place for Barsoum, who had been working toward an explanation of non-linear elastic behavior within the constraints of dislocation theory.

With this new paradigm in mind, Barsoum’s team set about proving that ripplocation exists, not only in near surface layers of 2D materials — as suggested by the MIT paper — but throughout the internal layers of thicker — “bulk” — layered materials as well. Through a careful examination of computer models – wherein graphitic atomic layers were compressed edge on, the researchers saw that the deformation was indeed consistent with the atomic-level rippling effect.

“We ran atomistic simulations on a bulk sample of graphite, because it is a layered material that has been studied quite a bit and it is used in a number of applications where it is loaded,” said Jacob Gruber, a doctoral candidate in the College of Engineering and first author on the paper. “By constraining the edges of the sample while compressing the material, we observed the nucleation and motion of a multitude of ripplocations that self-assemble into kink boundaries. The observation is significant because these are the same sort of kink bands that are ubiquitous in geologic formations and layered solids that have been deformed.”

This confinement of the material, according to Tucker, is both key to ripplocation behavior and almost always present in nature when materials are being stressed, whether it’s in power plants or plate tectonics.

“What is interesting about kinking nonlinear elasticity is that it is a strong function of confinement,” Tucker said. “Take a deck of cards. If you try to push a pencil parallel to the cards, without constraining them, the deck will simply split into two smaller stacks. If however, you apply pressure perpendicular to the deck of cards, confining them, then the pencil will leave an indentation mark as near surface layers buckle under the tip of the pencil.”

To get a better look at the behavior in the lab, the researchers examined samples of a layered ceramic known as a MAX phase, in which the layers were loaded with a spherical indenter.

“When we obtained high resolution transmission electron microscope images of the defects that formed as a result of the deformation we were not only able to show that they were not dislocations, but as importantly, they were also consistent with what ripplocations would look like,” Taheri said. “We now have evidence for a new defect in solids; in other words we have doubled the deformation micromechanisms known.” According to Barsoum, ripplocation and its role in the deformation of layered solids is an important scientific finding because it applies to most layered materials, including — quite possibly — geologic formations.

“There are many layered solids, in both nature and the built environment, that are technologically important, so it’s essential to understand their behavior,” Barsoum said. “This new finding will require us to reexamine past findings and reinterpret results that to date were incorrectly explained using dislocation theory.”

Barsoum plans to work through many of his seminal MAX phase papers, as well as examining new materials through the lens of ripplocation.

To view video of ripplocation models and simulations visit: https://www.youtube.com/watch?v=9TLLOzvnujI&index=1&list=PLU6Y5r5-eNsojUgvZ1Yqlfq6FdnMj0Dnt 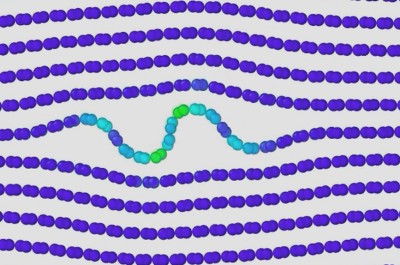 Caption: Researchers at Drexel University have observed a new type of structural deformation mechanism in bulk materials, called ripplocation. It occurs when atomic layers inside the material ripple and buckle when the material is compressed. 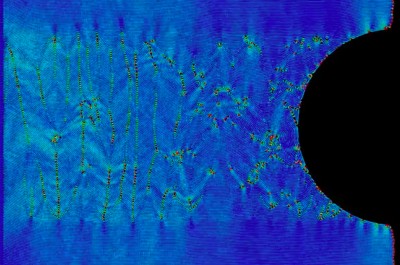 Caption: When a layered material like graphite receives an edge-on force it can elastically recover its shape because the force is dissipated through ripplocation of its internal atomic layers.