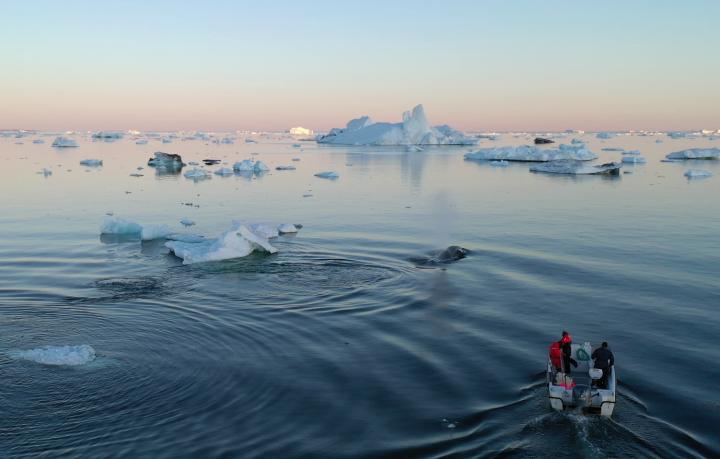 Newswise — Climate changes prompt many important questions. Not least how it affects animals and plants: Do they adapts, gradually migrate to different areas or become extinct? And what is the role played by human activities? This applies not least to Greenland and the rest of the Artic, which are expected to see the greatest effects of climate changes.

'We know surprisingly little about marine species and ecosystems in the Arctic, as it is often costly and difficult to do fieldwork and monitor the biodiversity in this area', says Associate Professor of marine mammals and instigator of the study Morten Tange Olsen from the GLOBE Institute at the Faculty of Health and Medical Sciences, University of Copenhagen.

To address these questions, researchers from the University of Copenhagen, Aarhus University and the Greenland Institute of Natural Resources collected water samples in West Greenland with the help of local hunters and fishermen. Their method is simple: Go out to sea in a small boat and collect water in bottles. The content, however, is far more complex. The bottles with seawater contain so-called environmental DNA, which can provide insight into how climate changes and human activities impact the biodiversity. The researchers have chosen to focus on the bowhead whale, which constitutes a key species in the Arctic ecosystem and therefore is a good indicator of changes in water temperatures and sea ice cover.

'The water samples contain enough DNA from bowhead whales to determine their presence, genetic diversity, the composition of the population and patterns of migration. You can actually monitor the marine biodiversity of the Arctic simply by going out in a small boat and collecting water in bottles, which is subsequently analysed in the DNA laboratory. This way, we are able to keep an eye on how humans and climate changes impact the bowhead whale and other marine life in the Arctic', says Morten Tange Olsen.

Footprint in a bottle

Together with local hunters and fishermen in Qeqertarsuaq (Godhavn), the researchers collected more than 100 one-litre water samples from Disko Bay in West Greenland in May 2017 and 2018. In May, the sea ice has just broken up and bowhead whales visit the area to forage. The samples were collected from small boats along transects and specifically in the 'footprint' of bowhead whales - the small ripples on the water surface created when the whales come up to breathe and dive again.

'There is a lot more bowhead whale DNA in such a footprint than in a random water sample collected at the same time in the same area. You can find bowhead whale DNA in a footprint at least 10 minutes after the whale dove', says Natasja Lykke Corfixen, who helped initiate the study as part of her master's thesis at the Faculty of Science at the University of Copenhagen and the Greenland Institute of Natural Resources.

By optimising the DNA methods in the laboratory, the researchers hope to be able to sequence the whale's entire genome based on water samples. 'So far we have managed to sequence mitochondrial genomes from the water samples, and we are currently testing various methods for capturing the whale's entire genome, as well as the genomes of the algae and crustaceans that form part of their food chain', says PhD Student at the GLOBE Institute Dóra Székely.

Health and genetics based on a water sample

The researchers hope that by optimising DNA extraction and sequencing protocols, and learning more about the connection between genes, behaviour and health, they will eventually be able to use the method to monitor the health status of the bowhead whale and many other animals.

'The field of Environmental DNA is seeing rapid development and is increasingly used for biodiversity monitoring in lakes, rivers, wetlands and, to some extent, the sea. We have shown that the method is also useful in the Arctic, and that it can be used to monitor not just the presence of a species, but also its diversity and patterns of movement. By further developing this simple method we are able to significantly increase our knowledge of marine biodiversity, and hopefully the impact of both climate changes and human activities', says Morten Tange Olsen.