A Call to Action to Decrease Maternal Mortality Rates 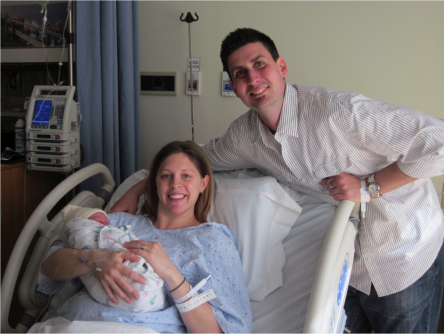 After giving birth, Tara Hansen expressed concern about her health but was sent home. Six days later, she died of an undetected infection that had occurred during delivery. Today, her husband, Ryan, honors her memory by raising awareness of maternal health through a foundation that bears her name.

Newswise — For Tara Hansen, the birth of her first child, Brandon, in 2011 heralded a new chapter in her life with her high school sweetheart, Ryan. Throughout her pregnancy, the young, athletic special-education teacher had maintained her healthy lifestyle, joking that she craved spinach and mushrooms over ice cream.

Brandon’s birth was textbook as well, but shortly after delivery Tara told her healthcare providers that her body didn’t feel right. However, since she was considered a healthy postpartum patient, she was sent home. Six days after having Brandon, she died from an infection that had occurred during the birth.

“Tara was the only person who knew something was wrong, and her complaints just kept falling on deaf ears,” says Ryan. “Everyone assumed that the pain she described was to be expected because she just had a baby.”

Ryan began researching maternal mortality and realized that Tara was not alone. In fact, although maternal deaths are declining worldwide, they are on the rise in the United States. The U.S. Centers for Disease Control and Prevention reported 17.8 pregnancy-related deaths for every 100,000 live births nationwide in 2011, up from a low of 7.2 in 1987. In New Jersey, the most recent state data shows that from 2006 to 2008, the average maternal mortality rate was 14.4 deaths per 100,000 births, with higher rates reported for black women.

Vowing to make an impact in his wife’s honor, Ryan, a Rutgers alumnus, launched the Tara Hansen Foundation in 2012 and forged a partnership with Rutgers Robert Wood Johnson Medical School, where his mother, Patricia Hansen, is director of communications and public affairs.

With assistance from the medical school and Robert Wood Johnson University Hospital, the foundation developed the “Stop. Look. Listen!” campaign. The campaign’s goals are to increase public and professional awareness of pregnancy-related deaths, to empower women to report pregnancy-related medical issues and to increase awareness and responsiveness among healthcare practitioners.  The initiative has received strong support from the American College of Obstetricians and Gynecologists, New Jersey section; Association of Women’s Health, Obstetric and Neonatal Nurses; and the New Jersey Chapter of Certified Nurse Midwives.

The campaign prompted New Jersey State Sen. Joseph Vitale to sponsor legislation that was signed into law in May establishing January 23 of each year as Maternal Health Awareness Day. The law made New Jersey the first state to designate a day focusing on maternal health.

“Pregnancy is considered a happy time in a woman’s life, and families don’t want to think about anything negative, like hypertension or diabetes,” says Bachmann, who helped create “Stop. Look. Listen!” “Our goal is to empower women and families to advocate if they feel something is wrong and to understand that no question about the mother-to-be or new mom’s health is inconsequential. For example, itchy skin could mean a liver or gall bladder problem, which was caused by the pregnancy. With ‘Stop. Look. Listen!’ clinicians need to stop whatever they are doing, look at the woman and conduct a full medical evaluation and, of course, listen carefully to what she and her family are saying about her concerns and how she is feeling.”

The campaign seeks to educate all healthcare providers – not just OB-GYNs, nurses and certified nurse midwives – family members and emergency room physicians, who may be the first to recognize something might be wrong with a woman who has just given birth, says Joseph Apuzzio, professor in the Department of Obstetrics, Gynecology and Women’s Health at Rutgers New Jersey Medical School and a member of the New Jersey Maternal Mortality Review committee.

From 2009 to 2013, the committee identified 225 maternal deaths, 34.7 percent of which were pregnancy-related, with nearly 50 percent of those deaths occurring more than 43 days after birth. The leading causes were cardiac disease, embolism, septic shock/sepsis and cerebral hemorrhage. “We found that women suffer from pregnancy-related health issues during or just after delivery, such as cardiovascular diseases, blood clots, pneumonia and stroke, which ultimately resulted in their death,” Apuzzio says. “Many of these women have no prior history of health issues.”

The two Rutgers medical schools, the foundation and community groups have engaged hospitals throughout the state to promote “Stop. Look. Listen!” on January 23 and are using the day to connect with colleagues in other states to further the campaign’s message. Since their collaboration with the foundation began, the schools have stepped up efforts to improve maternal care and to teach aspiring physicians to respond to all maternal health complaints, however minor they appear. The schools will hold a joint conference on maternal health awareness on January 31.

Ryan looks forward to promoting “Stop. Look. Listen!” nationwide. “It’s frightening that most people in the United States do not consider a healthy, postpartum woman at risk for death since we are in a developed country,” he says. “This day of awareness shows that Tara’s death has meaning – to save other women’s lives.”