A Capsule for Removing Radioactive Contamination From Milk, Fruit Juices, Other Beverages 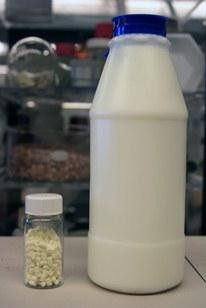 Scientists have developed a capsule that removes radioactive decontamination from milk and other beverages.

EMBARGOED FOR RELEASE: Tuesday, March 27, 2012, 6:45 p.m. Eastern TimeNote to journalists: Please report that this research was presented at a meeting of the American Chemical Society

A press conference on this topic will be held at 11 a.m. Eastern Time, March 27, 2012, in the ACS Press Center, Room 15A, in the San Diego Convention Center. Reporters can attend in person or access live audio and video of the event and ask questions at www.ustream.tv/channel/acslive.

Newswise — SAN DIEGO, March 27, 2012 — Amid concerns about possible terrorist attacks with nuclear materials, and fresh memories of environmental contamination from the 2011 Fukushima Daiichi nuclear disaster in Japan, scientists today described development of a capsule that can be dropped into water, milk, fruit juices and other foods to remove more than a dozen radioactive substances.

In a presentation at the 243rd National Meeting & Exposition of the American Chemical Society (ACS), the world’s largest scientific society, they said the technology could be used on a large scale by food processors or packaged into a small capsule that consumers at the home-kitchen level could pop into beverage containers to make them safe for consumption.

“We repurposed and repackaged for radioactive decontamination of water and beverages a tried-and-true process that originally was developed to mine the oceans for uranium and remove uranium and heavy metals from heavily contaminated water,” said Allen Apblett, Ph.D., who led the research team. “The accident at the Fukushima nuclear plant in Japan and ongoing concerns about possible terrorist use of nuclear materials that may contaminate food and water led us to shift the focus of this technology.”

The technology also can remove arsenic, lead, cadmium and other heavy metals from water and fruit juices, Apblett said, adding that higher-than-expected levels of some of those metals have been reported in the past in certain juices. He is with Oklahoma State University in Stillwater.

Nanoparticles composed of metal oxides, various metals combined with oxygen, are the key ingredients in the process. The particles, so small that hundreds would fit on the period at the end of this sentence, react with radioactive materials and other unwanted substances and pull them out of solution. The particles can absorb all 15 of the so-called “actinide” chemical elements on the periodic table of the elements, as well as non-actinide radioactive metals (e.g., strontium), lead, arsenic and other non-radioactive elements.

The actinides all are radioactive metals, and they include some of the most dangerous substances associated with nuclear weapons and commercial nuclear power plant accidents like Fukushima. Among them are plutonium, actinium, curium and uranium.

In the simplest packaging of the technology, the metal-oxide nanoparticles would be packed inside a capsule similar to a medicine capsule, and then stirred around in a container of contaminated water or fruit juice. Radioactive metals would exit the liquid and concentrate inside the capsule. The capsule would be removed, leaving the beverage safe for consumption. In laboratory tests, it reduced the concentrations of these metals to levels that could not be detected, Apblett noted.

The technology is moving toward commercialization, with the first uses probably in purifying calcium dietary supplements to remove any traces of lead, cadmium and radiostrontium. Apblett said the capsule version could have appeal beyond protection against terrorist attacks or nuclear accidents, among consumers in areas with heavy metals in their water or food supplies, for instance. The scientists acknowledged funding from the Oklahoma Economic Development Generating Excellence Program.

AbstractNuclear accidents such as the ones at the Fukushima nuclear plant in Japan and at Chernobyl along with the legacy of past use and testing of nuclear weapons have highlighted the need for technologies to decontaminate food and water that contain radionuclides. The potential for future nuclear wars and even the contamination of food and water by spent uranium penetrators further delineate the need for technologies to protect animals and the public. We have developed technologies based on nanoparticulate metal oxides that have very high capacity for radionuclides. For example, they can be used to remove radiostrontium from milk. The use of suitably-derivitized nanoporous silicas for this purpose will also be discussed.