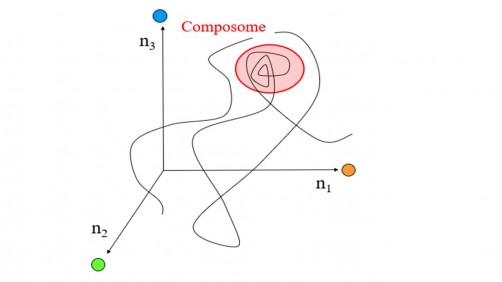 A “walk” in composition space for a “Lipid World” molecular assembly, shown in simplified 3D. A point on the line signifies a specific composition along the time axis, whereby the three coordinates are amounts of the three different molecule types. A “composome” (pink background) is a time interval when the composition stays almost unchanged, signifying compositional replication.

Newswise — In 1924, Russian biochemist Alexander Oparin claimed that life on Earth developed through gradual chemical changes of organic molecules in the “primordial soup” that likely existed here four billion years ago. In his view, the complex combination of lifeless molecules, joining forces within small oily droplets, could assume life faculties – self-replication, selection, and evolution. These ideas were received with considerable doubt, which remains today.

Thirty years later, when the structure of DNA was deciphered, scientists realized that this molecule is capable of self-replication, seemingly solving the enigma of life’s origin without resort to Oparin’s droplets. But critics argued that life requires not only replicators, but also enzyme catalysts to control­ metabolism. Another 30 years passed before the discovery that RNA, key component in information transfer from DNA to proteins, can also be an enzyme. This is how the concept of “RNA World” was born, whereby life began when the primordial soup gave birth to a ribozyme, which can both replicate and control metabolism.

Doubts lingered despite this finding, because a replicating ribosome is a highly complex molecule with negligible probability of spontaneous appearance in the soup. This led to an alternative concept – mutually catalytic networks, affording the copying of entire molecular ensembles. This idea echoes Oparin’s evolving complex combination of simple molecules, each with high likelihood of appearance in the soup. What remained was to generate a detailed chemical model that would help support such a narrative.

The Weizmann Institute of Science’s Prof. Doron Lancet and colleagues in the Department of Molecular Genetics devised such a model. First, it was necessary to identify the appropriate type of molecules, those that can accrete together and effectively form networks of mutual interactions, in line with Oparin’s droplets. Prof. Lancet proposed lipids, oily compounds that spontaneously form the aggregated membranes enclosing all living cells. Lipid bubbles (vesicles) can grow and split much like living cells. This is how Prof. Lancet generated the concept “Lipid World” two decades ago.

To analyze the invoked molecular networks, he and his team used the tools of systems biology and computational chemistry, instilling rigor into the somewhat ephemeral concept of mutually catalytic networks.

The scientists first address in detail the nagging question of how lipid assemblies can store and transmit information from one growth-split generation to another. Prof. Lancet and company come up with a hitherto rarely explored notion that what gets propagated is compositional information, and use detailed computer simulations to show how this happens. Furthermore, they indicate a profound similarity between such composition copying and the way that growing and proliferating living cells preserve their epigenetic information, independent of DNA replication.

In an article in the Journal of the Royal Society Interface, Prof. Lancet and colleagues report an extensive literature survey showing that lipids can exert enzyme-like catalysis, similar to ribozymes. This property is crucial for forming the mutual interaction networks. Subsequently, using the tools of systems biology and computational chemistry, the authors show that the oily droplets can accumulate and store compositional information and, when undergoing fission, transmit the information to their progeny.

Based on the computer model they developed, the scientists demonstrated that specific lipid compositions, called “composomes,” can undergo compositional mutations, be subject to natural selection in response to environmental changes, and even undergo Darwinian selection. Prof. Lancet comments that such an information system, which is based on compositions and not on the sequence of chemical “letters” as in DNA, is reminiscent of the realm of epigenetics, where traits are inherited independent of the DNA sequence. This lends credence to the scientists’ assumption that life could have emerged before the advent of DNA and RNA. In fact, their article delineates a chemical path that leads to the appearance of genetic material in the framework of the oily droplets.

Prof. Lancet’s Lipid World concept is contingent upon the question of whether there were sufficient oil-like “water hating” molecules in the primordial soup. Here, too, the scientists describe a comprehensive literature search, according to which there is a high probability for such molecules to be present on early Earth.

This conclusion was reinforced by a very recent study showing that Enceladus, one of Saturn’s moons, has a sub-glacial ocean (primordial ocean) replete with hydrophobic compounds, some of which could form Lipid World-type droplets. Prof. Lancet contends that these findings, along with innovative model-based computations, show that the probability of life’s emergence is relatively high – including the exciting possibility that Enceladus presently harbors some early lipid-based life forms.

Prof. Lancet is the incumbent of the Ralph D. and Lois R. Silver Professorial Chair of Human Genomics.