A Civil War Inside Our Cells: Scientists Show How Our Bodies Fight Off “Jumping Genes” 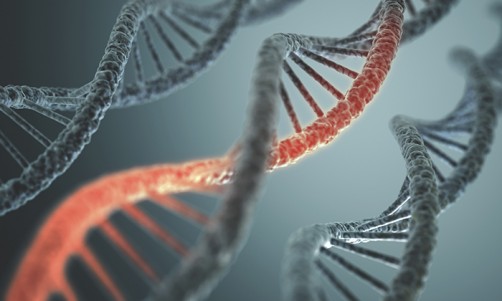 (Illustration) Jumping genes hide out in our DNA, then spin off copies that jump to other areas of our DNA and potentially cause mutations.

Newswise — ANN ARBOR, Mich. — There’s a civil war going on inside every one of the 37 trillion cells in your body. Now, University of Michigan scientists have uncovered how your cells keep this war from causing too much collateral damage.

On one side of the battle: your “regular” DNA, which provides the day-to-day instructions for life. On the other side: tiny bits of rogue DNA that hide like spies between genes in your own DNA. From time to time, these rogue bits of DNA spin off a copy of themselves and “jump” to another DNA location – often causing harmful mutations when they land.

How our cells fight off the effects of these rogue DNAs, called LINE-1 retrotransposons, has remained a mystery. But in a new paper published in the open-access journal eLife, scientists from the University of Michigan Medical School and Howard Hughes Medical Institute and colleagues have captured the action like battlefield reporters.

They zeroed in on the defensive activity of an enzyme called APOBEC3A – and showed that it can cause mutations within the LINE-1 retrotransposons as they jump to new locations. This prevents subsequent invasions into other areas of DNA.

This defensive strike sends out a signal to other defense forces inside the cell, which neutralize the jumping gene and sweep away the destroyed copy.

The findings not only help explain a mystery of the body – they also may help in the development of cancer drugs. That’s because other APOBEC enzymes cause cancer-related mutations – a kind of “friendly fire” that makes these enzymes a potential target for new drugs.

The new findings about APOBEC3A’s ability to squelch LINE-1 activity could mean that blocking APOBEC3 with new cancer drugs might carry consequences.

John Moran, Ph.D., the U-M and HHMI geneticist who led the work with Sandra Richardson, Ph.D., says the new finding gives scientists the first proof of a hypothesized defense strategy.

“It’s often hard to see what normally happens during an efficient process that occurs inside our cells,” he explains. “But by blocking the process that would normally clean up the evidence of this interaction, we can start to see what is going on.”

Our cells may each contain as many as 500,000 copies of LINE-1, says Moran, the Gilbert S. Omenn Collegiate Professor of human genetics and professor of internal medicine at U-M and an HHMI research investigator.

LINE-1 is part of the so-called “junk DNA” that makes up half of our genetic material – but the purpose of “junk DNA” is unclear.

Most LINE-1 copies lay dormant, but a few dozen active copies reside in each cell. LINE-1 retrotransposons can activate and jump, making them dangerous junk.

In fact, LINE-1 alone may cause one in every 250 disease-causing mutations in humans.

So, the “junk” moniker doesn’t really fit, says Moran – though he admits we are probably stuck with this label. He and his team have studied LINE-1 and other jumping genes for years, working with colleagues from the University of Pennsylvania and the Salk Institute, who are co-authors on this paper, and, in previous studies, with colleagues at Duke University.

In addition to fighting LINE-1 jumps that can cause mutations, APOBEC enzymes also fight off certain viruses. In fact, scientists first discovered these enzymes when observing how human cells fight off infection by HIV, the virus that causes AIDS.

Just like HIV, LINE-1 spreads throughout our DNA by making an RNA copy of its genetic sequence. Then, the RNA is copied back into a new LINE 1 copy that can slide into a new location in our DNA -- a process called retrotransposition.

In this new paper, the researchers show that LINE-1 has one important point of vulnerability. When the new DNA copy peels away from the RNA, an APOBEC3A molecule can attach and change some of the “letters” or base-pairs (rungs on the DNA ladder) in the DNA sequence. Specifically, it changes the “C” bases to “U” bases. The presence of those U bases triggers the cell’s cleanup mechanism to come in and dismantle the new copy of the rogue DNA.

In other words, APOBEC3A preempts a potential mutation by LINE-1 jumping, by itself causing a mutation in the new LINE-1 copy that the cell then destroys. But APOBEC3A can pose a mutation danger to the rest of our DNA – which means our cells must strike a balance between a vigorous defense and the danger of friendly fire.

This kind of intracellular “immunity” may have been raging since the beginnings of life on earth, Moran speculates. LINE-1 contains the code for a molecule called reverse transcriptase – the kind of molecule that would have been crucial when higher life forms started to evolve and use DNA instead of the less stable RNA to carry genetic information.

Moran and his colleagues will continue to study the importance of the APOBEC family of enzymes in fighting the effects of jumping genes.

They hope to study APOBEC’s importance in fighting off mutations early in the development of embryonic life, and in the development of the eggs and sperm that carry our genes to the next generation. Now that they have shown how this defense mechanism works in cultured cells, they hope to study the importance of LINE-1 jumping and the defenses against it in specific diseases.