A Conversation with a Living Legend® Raises More Than $1 Million 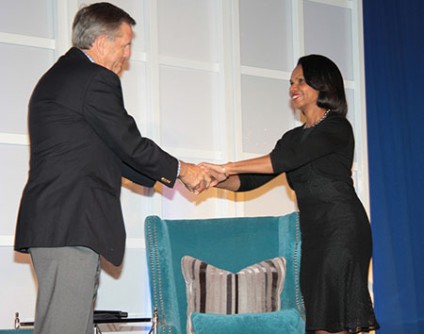 Newswise — Dr. Condoleezza Rice was the honoree of The University of Texas MD Anderson Cancer Center’s A Conversation With a Living Legend®, Wednesday, May 21 at the Westin Galleria. Significantly surpassing all past years’ fundraising totals for the Houston event, it attracted 930 guests and raised more than $1,031,000 for MD Anderson’s Moon Shots Program, an unprecedented, comprehensive effort to significantly reduce cancer deaths and to transform cancer care, initially focusing on eight cancers. Proceeds will be used specifically to support the Prostate Cancer Moon Shot.

Brit Hume of Fox News Channel interviewed Rice during the sold-out dinner program, touching on domestic and international current affairs and delving into such topics as Vladimir Putin, president of Russia; the 2012 attack on the U.S. consulate in Benghazi, Libya; and Rice’s withdrawal as speaker at this year’s Rutgers University commencement ceremony.

Cyvia and Melvyn Wolff, a member of the MD Anderson Cancer Center Board of Visitors, were chairs of the seventh annual event. Kelli Kickerillo and Todd Forester were co-chairs and will lead next year’s event. Honorary chairs were Vicky and Harris Pappas, who chaired the 2013 Living Legend event honoring Emmitt Smith. Dennis Hughes, M.D., Ph.D., associate professor, MD Anderson Children’s Cancer Hospital, began the evening with an a cappella rendition of the national anthem. Ron DePinho, M.D., president of MD Anderson, and Christopher Logothetis, M.D., chair of Genitourinary Medical Oncology and co-chair of the Prostate Cancer Moon Shot, offered remarks, along with Cyvia Wolff, who thanked all for their generous support. Rice served as the 66th U.S. Secretary of State from 2005 to 2009. She was the second woman and first African-American woman to hold the post. Rice also was the first woman to hold the position of assistant to the president for national security affairs, under President George W. Bush from 2001 to 2005. She’s currently a professor of political economy in the Graduate School of Business and of political science at Stanford University. With more than 48 years of journalism experience, Hume currently serves as a senior political analyst for FOX News Channel (FNC) and contributes to all major political coverage. He also is regular panelist on FNC’s weekly public affairs program, “FOX News Sunday.” Before joining FOX News in 1996, Hume was with ABC News for 23 years, serving as chief White House correspondent from 1989 through 1996.

Since 2007, A Conversation With a Living Legend® in Houston has raised approximately $3,528,000 for MD Anderson research and patient care initiatives.