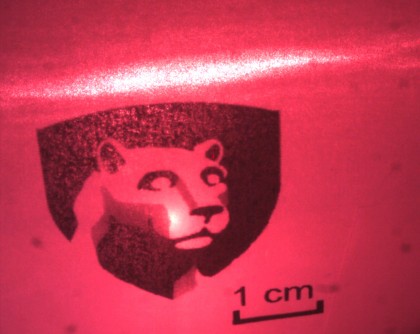 A red laser beam shines on a card bearing a replica of Penn State’s academic logo.

Newswise — Since their invention in 1962, semiconductor diode lasers have revolutionized communications and made possible information storage and retrieval in CDs, DVDs and Blu-ray devices. These diode lasers use inorganic semiconductors grown in elaborate high vacuum systems. Now, a team of researchers from Penn State and Princeton University have taken a big step toward creating a diode laser from a hybrid organic-inorganic material that can be deposited from solution on a laboratory benchtop.

“It’s usually not a big leap to turn a light emitting diode (LED) into a laser. You essentially just add mirrors and drive it harder,” said Chris Giebink, assistant professor of electrical engineering, Penn State. “Once organic light emitting diodes (OLEDs) were invented 30 years ago, everybody thought that as soon as we had relatively efficient OLEDs, that an organic laser diode would soon follow.”

As it turned out, organic diode lasers proved to be really hard to make.

An organic laser diode could have real advantages. First, because organic semiconductors are relatively soft and flexible like plastic, organic lasers could be incorporated into new form factors not possible for their inorganic counterparts. And whereas inorganic semiconductor lasers are relatively limited in the wavelengths, or colors, of light they emit, an organic laser can produce any wavelength a chemist cares to synthesize in the lab by tailoring the structure of the organic molecules. This tunability could be very useful in applications ranging from medical diagnostics to environmental sensing.

While nobody has yet succeeded in making an organic laser diode, the key may well involve a related material that is getting a huge amount of attention in the research community over the last few years. Called organic/inorganic perovskites, this hybrid material has been responsible for a meteoric rise in the efficiency of photovoltaics, Giebink said.

A perovskite is one of any number of fairly common minerals that share a similar cubic crystal structure. Somewhat paradoxically, one of the reasons these hybrid perovskite materials work so well in solar cells is that they are good light emitters. For that reason, they are also of interest for use in LEDs and lasers. The material Giebink and his colleagues are studying is composed of an inorganic perovskite sublattice with relatively big organic molecules confined in the middle.

“The ultimate goal is to make an electrically-driven perovskite laser diode. That would be a game changer,” he said. “It is fairly easy to make the perovskite material lase by optical pumping, that is, by shining another laser on it. However, this has only worked for very short pulses due to a poorly understood phenomenon we call lasing death. Getting it to go continuously is a key step toward an eventual electrically-driven device. What we found in this recent study is a curious quirk: we can avoid lasing death entirely just by lowering the temperature of the material a little bit to induce a partial phase transition.”

In a paper published online today in the journal Nature Photonics, Giebink and colleagues report the first “Continuous-wave lasing in an organic-inorganic lead halide perovskite semiconductor.”

In some inorganic lasers there are narrow regions called quantum wells where charge carriers can be trapped as the electrons and holes fall into the wells. The intensity of the lasing depends on how many charge carriers can be packed into the quantum wells. In the perovskite material, the arrangement of the high-temperature-phase inclusions inside the low temperature bulk seems to mimic these quantum wells and may play a role in enabling the continuous lasing.

“The jury is still out on this explanation,” Giebink said. “It may be something more subtle.”

Nevertheless, these results do point toward an opportunity to engineer a material that has the built-in qualities of this mixed phase arrangement, but without having to actually cool the material to low temperature. The current paper points to a couple of ideas for how those materials could be designed. The next big step is then to switch from optical pumping with an external laser to a perovskite laser diode that can be powered directly with electrical current.

“If we can solve the electrical pumping problem, perovskite lasers could turn into a technology with real commercial value,” Giebink said.

In addition to Giebink and Jia, other contributors include Alex Grede, a graduate student in Giebink’s lab, and Princeton assistant professor Barry Rand and his graduate student Ross Kerner.

This work was supported by the Air Force Office of Scientific Research, the National Science Foundation, DARPA and the Office of Naval Research.