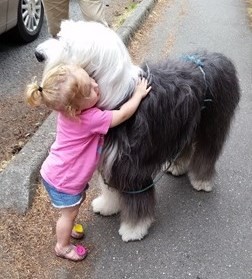 Get a glimpse into the day of one of Seattle Children’s visiting dog teams, Hank, an Old English sheepdog and his human companion, Tom, as they visit patients at the hospital.

Newswise — Hank, the 5-year-old, 78-pound Old English sheepdog, may seem like an unlikely visitor strolling through the colorful halls of Seattle Children’s, but he’s there for one important reason — to put as many smiles on the faces of young patients as possible.

The shaggy canine with a slow strut makes his rounds visiting patients in different units of the hospital every other Thursday of the month alongside his trusty human companion, Tom Whalen.

During their visits, the “Tom Hanks” duo carry a celebrity-like status, frequently being stopped in the hallways by patients, parents and staff for a quick pet on the head or simple greeting.

From his calm demeanor, soulful stare and wag of the tail each time he encounters someone, it’s clear that Hank, a registered therapy dog who has been visiting the hospital for two years, is skilled in comforting those that he meets.

Whalen said he understands that for some kids, the stress of a hospital stay can be overwhelming; especially for those whose stays last weeks or even months due to the need for significant medical care. But, he believes a visit from a therapy dog like Hank can help patients experience joy, even in the midst of challenging circumstances, and provide them with energy and motivation to aid in their healing process.

“The fuzzy feeling Hank provides reaches far beyond the surface of these kids’ hands,” said Whalen. “We are able to give them a new focus aside from what they are currently feeling. It’s amazing to see the positive shift in energy for both the patient and their family after Hank walks in.”

An unbreakable bond leads to a healing paw

This dynamic duo is just one of nine six-legged teams that Christi Dudzik, Visiting Dog Program Coordinator in Seattle Children’s Child Life Department, leads. She and her yellow Labrador, Paddy, make frequent visits to the hospital as well.

“Teamwork is key in the relationship between a therapy dog and its owner,” said Dudzik. “It’s not just about the dog — there needs to be a strong connection between both ends of the leash.”

This connection was immediate the very first day Whalen laid eyes on Hank as a bushy 9-pound puppy. With his laid-back, loving temperament, Whalen felt like he couldn’t have been luckier in finding the perfect dog.

Hank soon became Whalen’s travel and sightseeing companion, driving thousands of miles across the country to visit friends and family and making pit stops along the way to famous landmarks like Mount Rushmore.

It was not long until Hank’s relentless patience and gentle nature sparked the idea for Whalen that he should become a therapy dog so he could spread joy to those who needed it most.

Whalen also understood the challenges of spending time in a hospital. When he was just 9-years-old, his brother was diagnosed with leukemia. He spent several years visiting his brother at a children’s hospital in Southern California where he grew up.

“I remember how my brother loved having visitors,” recalls Whalen. “This is part of the reason why I love visiting kids at Seattle Children’s. I’m able to see the amazing affect Hank and I can have. I’ve even seen patients whose parents have told me that their child had not smiled or laughed in days or weeks, but as soon as Hank walked in, they lit up with sheer joy.”

In ‘puparation’ for a visit

The hospital requires a therapy dog to be bathed 24-48 hours prior to a visit due to infection control. Luckily, Hank enjoys bath time and perks up the minute he sees Whalen spread out towels on his bathroom floor meant to soak up the expected overflow of water.

Once at the hospital, the duo receives a list of patients who are awaiting a visit from a furry friend. Then they’re off to do what they do best.

On this particular evening, the pair is stopped by a mom walking down the hall who is taken by Hank’s irresistible charm. As she bends down to pet Hank with a grin from ear-to-ear, she said, “He’s such a cutie! You have to visit my daughter — it would make her day!”

Never turning down a visit, the pair was on their way.

A ‘fur-ever’ friend, the ‘pawsitive’ effect of a therapy dog

Jo-Anne Antoun’s 13-year-old daughter, Isabella, was admitted to the hospital after she felt an uncomfortable pain in her abdomen. It turned out that she had appendicitis and developed a large abscess, which needed to be treated by pediatric surgeons immediately.

After the surgery, Isabella needed to stay at the hospital for a few days to fully recover. Antoun said that Isabelle was feeling down and was anxious to go home.

However, as soon as Whalen knocked on the door and Hank trotted in, Isabella’s eyes widened and her face glowed with pure joy.

Hank gently walked over to her and laid his large head on the side of her bed as an invitation to pet his freshly-groomed mane.

Antoun was ecstatic to see the change in her daughter’s mood during and after Hank’s visit.

“Hank was adorable — he lifted our family’s mood and took the time to interact with all of us in the room. Hank is amazing.”

Whalen said this type of reaction is common and is why they do what they do.

“Some of the reactions I’ve witnessed are remarkable,” said Whalen. “We once visited a patient that had been unresponsive, but a gentle stroke of Hank’s hair encouraged movement and interaction that their family hadn’t seen in days. Hank has also consoled families in distress, and on occasion, has transformed tears of sadness to tears of joy. I am just in awe of Hanks ability to help heal and I am honored to be on the other end of his leash, helping to brighten these kids’ day.”