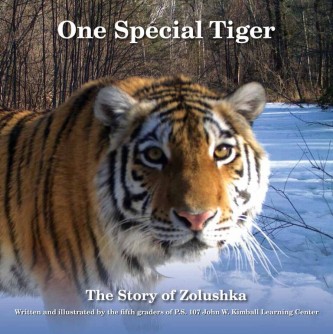 Photos: Cover page from "One Special Tiger: The Story of Zolushka"

Newswise — The story of Zolushka—“Cinderella” in the Russian language—captured hearts across the world in 2013 when this young, orphaned tigress was rescued in the wild by scientists, reared for a short time in captivity, and then released back into the wild as an adult.

Zolushka lost her mother to a poacher’s bullet and without her, suffered extreme frostbite in the harsh Russian winter. After scientists amputated a portion of her tail and she was released back to the wild, her shortened tail was instantly recognizable to the scientists monitoring her movements in the forest using camera trap photography. In 2015, the story got even better when she found a mate and then appeared in camera trap photos with her own tiny cubs. Zolushka lives on today in the Russian forest.

Now, this fairy tale or, “fairy tail,” is being told from a new perspective and for a different audience: by and for children.

“One Special Tiger” features 54 pages of rich illustrations and spirited text by the children as they tell Zolushka’s story from her perspective. Their words and drawings are supplemented by dozens of photographs taken in the field of Zolushka, the forest she calls home, and the people who helped her get there.

The book includes a foreword by Dr. Viatcheslav Rozhnov of the A.N. Severtsov Institute, who conceived the idea to rehabilitate Zolushka and release her back into the wild, and an afterword by Dr. Dale Miquelle, the Coordinator of Tiger Programs for the Wildlife Conservation Society (WCS), who was involved in Zolushka’s release and subsequent monitoring.

“I’m glad I worked on the book because then I can help animals more and I think that’s important,” said Amelia Levenson, age 10, a graduating fifth grader.  “Zolushka’s story will show people the importance of these endangered animals and then they will want to try and save them.”  She added, “It was fun to try and write from the point of view of a tiger, because we got to use our imagination.”

Amelia and other students consulted with WCS experts working in Russia for background information and to ensure the accuracy of their facts.

“Our students are deeply committed to animal conservation,” said Eve Litwack, P.S. 107’s principal.  “They spent untold numbers of lunch periods foregoing recess in order to research, write, and illustrate the text to this book. Our fifth graders graduate from elementary school knowing that they have not only contributed to a published book, but perhaps even more importantly, they have made a real difference to endangered species around the world.”

One hundred percent of sales from this book directly benefit tiger conservation in Russia. “One Special Tiger” is the school’s fourth book in a series about endangered animals, organized by the P.S. 107 PTA committee, Beast Relief.  Past books have been featured in publications including National Geographic, Huffington Post, and Scholastic Magazine, with forewords contributed by Dr. Jane Goodall and other notable conservationists.