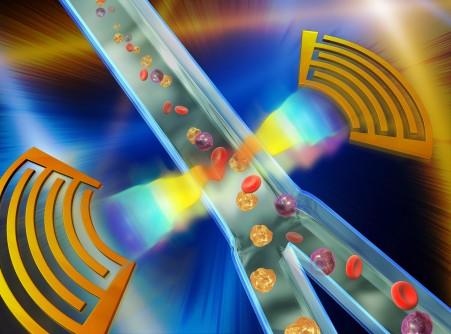 An artist's conception of an acoustic cell sorter is the cover image on the current issue of Lab on a Chip.

Newswise — Commercial fluorescence activated cell sorters have been highly successful in the past 40 years at rapidly and accurately aiding medical diagnosis and biological studies, but they are bulky and too expensive ($200,000 -$1,000,000) for many labs or doctors’ offices. Most significantly, these types of cell sorters can present biohazard concerns for operators and may damage cells or alter their properties, making them unfit for further study. To address these issues, researchers at Penn State have developed a new lab-on-a-chip cell sorting device based on acoustic waves.

In the cover story in the current issue of the British journal Lab on a Chip, researchers in the Department of Engineering Science and Mechanics at Penn State, along with Ascent Bio-Nano Technologies and the National Heart, Lung, and Blood Institute, a part of the National Institutes of Health, describe an acoustic cell sorter capable of the kind of high sorting throughput necessary to compete with commercial fluorescence activated cell sorters. “The current benchtop cell sorters are too expensive, too un-safe, and too high-maintenance. More importantly, they have very low biocompatibility. The cell-sorting process can reduce cell viability and functions by 30−99 percent for many fragile or sensitive cells such as neurons, stem cells, liver cells and sperm cells,” said Tony Jun Huang, Penn State professor of engineering science and mechanics and the paper’s corresponding author. “We are developing an acoustic cell sorter that has the potential to address all these problems.” Over the past decade, microfluidic cell sorters have emerged as a promising new tool for single cell sequencing, rare cell isolation, and drug screening. However, many of these microfluidic devices operate at only a few hundred cells per second, far too slow to compete with commercial devices that operate on the order of tens of thousands of operations per second. The Penn State system can sort about 3,000 cells per second, with the potential to sort more than 13,000 cells per second. The speed is generated by using focused interdigital transducers to create standing surface acoustic waves (SSAWs). When the waves are not focused, the acoustic field spreads out, slowing the sorting process. The narrow field allows the sorting to take place at high speed while gently manipulating individual cells.

“Our high-throughput acoustic cell sorter is expected to maintain cell integrity by preserving not only high viability, but also other cellular features such as gene expression, post translational modification, and cell function. The acoustic power intensity and frequency used in our device are in a similar range as those used in ultrasonic imaging, which has proven to be extremely safe for health monitoring, even during various stages of pregnancy,” said Huang. “With the gentle nature of low-power acoustic waves, I believe that our device has the best chance in preserving cell integrity, even for fragile, sensitive cells. Such an ability is important for numerous applications such as animal reproduction, cell immunotherapy and biological research.” Because the device is built on a lab-on-a chip system, it is both compact and inexpensive – about the size and cost of a cell phone in its current configuration. With the addition of optics, the device would still be only as large as a book. The acoustic cell sorter was fabricated in Penn State’s Nanofabrication Laboratory using standard lithography techniques.

“Just like using a lens to focus light, we design focused interdigital transducers to modify the wavefront of acoustic waves and finally confine the waves in a small area, which is comparable with the size of sorting targets. The focused acoustic waves have shown better performance in terms of sorting resolution and energy-efficiency than the existing acoustic methods. To the best of our knowledge, our device demonstrates the fastest operation time among all existing acoustic cell sorters,” said Liqiang Ren, a graduate student in Huang’s group and the paper’s lead author. Co-author Philip McCoy of the National Heart, Lung, and Blood Institute said, “Cell sorting is widely used in many areas of biology to characterize and separate cellular populations of interest. The cytometer size, price, and biohazard concerns remain factors that have prevented this technology from being even more widespread.Microfluidic cell sorting is revolutionary for the fields of cell biology and immunology, as well as other fields in biology, in concomitantly overcoming all of these obstacles. It is quite easy to envision applications for this technology in diverse environments from a family doctor’s office to field studies in limnology.”

In future work, the researchers plan to integrate their acoustic cell-sorting unit with an optical cell-detecting unit with the goal of increasing throughput to 10,000 events per second.

Funding was provided by the National Institutes of Health, the National Science Foundation, and the Penn State Center for Nanoscale Science. Portions of the work were performed at the Penn State Nanofabrication Laboratory, a node of the NSF-funded National Nanotechnology Infrastructure Network.