A Few Facts About Wheat 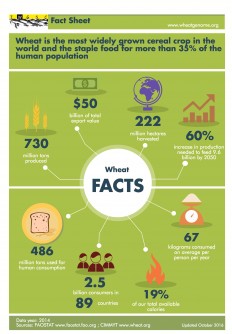 Newswise — Wheat is the most widely grown cereal crop in the world, with 730 millions tons produced on 222 million hectares (2014 data). Each year, nearly US $50 billion-worth of wheat is traded globally. The world’s top producers are the European Union, followed by China, India and the USA. Wheat is currently the staple food for more than 35% of the global human population. With the world’s population estimated to reach 9.6 billion by 2050, the World Bank has estimated that global wheat production would need to increase by 60 %. About the IWGSCThe IWGSC, with more than 1,500 members in 60 countries, is an international, collaborative consortium, established in 2005 by a group of wheat growers, plant scientists, and public and private breeders. The goal of the IWGSC is to make a high quality genome sequence of bread wheat publicly available, in order to lay a foundation for basic research that will enable breeders to develop improved varieties. The IWGSC is a U.S. 501(c)(3) non-profit organization.