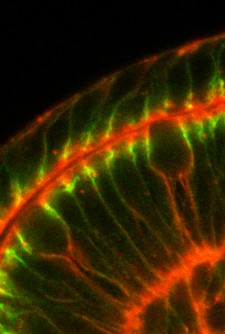 Newswise — KANSAS CITY, MO—Constructing a body is like building a house—if you compromise structural integrity, the edifice can collapse. Nowhere is that clearer on a cellular level than in the case of epithelial sheets, single layers of cells that line every body cavity from the gut to mammary glands. As long as epithelial cells pack tightly and adhere to their neighbors, the cellular business of building tissue barriers and constructing ducts goes smoothly. But if epithelial cells fail to hold together, they die, or worse, produce jumbled masses resembling tumors known collectively as carcinomas.

Stowers Institute for Medical Research Associate Investigator Matt Gibson, Ph.D., and his team use simple animal systems like fruit flies and sea anemones to investigate how epithelial cells maintain order while getting jostled by cell division.

New findings from his lab published in the July 21 advance online issue of Nature demonstrate that the way the mitotic spindle—the machinery that separates chromosomes into daughter cells during cell division—aligns relative to the surface of the cell layer is essential for the maintenance of epithelial integrity. It also hints at a surprising way that cells initiate a gene expression program seen in invasive cancers when that process goes awry.

The study employs live imaging of fruit fly imaginal discs, simple larval tissues that ultimately give rise to the adult wing. “In a culture dish, cells can divide willy nilly,” says Gibson. “But in an organism cell division must be reconciled with the broader structural context. Our work is addressing how epithelial tissues maintain structural integrity, even during the extreme events of cell division.”

The starting point for this work was the lab’s 2011 Current Biology paper showing that when columnar cells packed in an epithelium divided, their upper (apical) end briefly ballooned out to allow the cell’s nucleus to move into that region. As division began, the mitotic spindle (which faithfully distributes chromosomes into each daughter cell) invariably oriented itself parallel to the apical surface of the epithelium.

In other words, if you pointed a tiny camera in your gut toward dividing epithelial cells of its lining, you would “see” the mitotic spindle looking like a symmetrical web, exactly like it did in your high school biology textbook.

To determine why its orientation was non-random, the group did an equivalent experiment. Using high resolution fluorescence imaging to look inside dividing cells in developing wing discs, they observed that the two poles of the spindle were always near the septate junctions, specific regions of close molecular contact between neighboring cells. Two junction components, proteins called Discs Large and Scribble, were juxtaposed to the spindle, suggesting they might act as cues to orient it.

The seemingly odd names given to these factors decades ago reflect what biologists saw in fly mutants lacking each protein. In flies without Discs Large, the imaginal discs are massively overgrown, while fly embryos lacking Scribble resemble a chaotic scribble reminiscent of a tumor. Gibson reasoned that the reported tumor-suppressive activity of these proteins might be linked to a role in keeping the mitotic spindle in line.

So his group genetically deleted Scribble, Discs Large and a host of other factors in wing disc cells and watched what happened when cells divided, an effort aided by a customized microscope built by the Stowers Microscopy Center. What they saw was dramatic: Scribble deletion caused the mitotic spindle to flip over at a random angle, as did deletion of Discs Large. Next, by directly perturbing the spindle, the researchers video-captured the process by which cells with misoriented spindles began to peel away, or delaminate, from the epithelium.

“I did not expect that spindle orientation defects could be sufficient to cause loss of epithelial identity,” explains Yu-ichiro Nakajima, Ph.D., a postdoctoral fellow in the Gibson lab and the study’s first author. “But people in the field have hypothesized that spindle misorientation might cause tumorigenesis or even contribute to cancer development.”

Initially, the group did not observe such dire consequences: Gibson says that delaminating cells generally “fall out of the epithelium” and are killed off by apoptosis, a mechanism healthy tissues use to eradicate damaged cells. But when the team experimentally inhibited apoptosis, tumor-like growths emerged at the base of the cell layer. Cells in those growths expressed genes switched on in invasive human tumors, among them the fruit fly version of human Matrix metalloproteinase-1, an epithelial cancer biomarker.

“The findings derived from epithelial biology often lead to a better understanding of cancer development,” says Nakajima. “We have found that spindle orientation has a tumor-suppressive role in proliferating epithelia. So we are looking for other spindle regulators that may represent novel tumor suppressors.”

Gibson urges caution in comparing regulation of Drosophila and human epithelia. Nonetheless he notes that normal tissues in both flies and humans protect themselves by killing off misbehaving cells via apoptosis. If that mechanism failed, as is frequently observed in human cancers, disordered cells within an epithelium could escape.

“When cells are basically imprisoned in an epithelial layer, things stay nicely organized,” says Gibson. “But in this study we found that simply forcing a cell to delaminate from an epithelium is enough to initiate an abnormal gene expression program. That means that maintaining an ordered structure is not just a physical requirement but could also protects cells from switching on potentially aberrant genes.”

Other contributors were Emily Meyer from the Gibson lab, and Amanda Kroesen and Sean McKinney, Ph.D., from the Stowers Microscopy Center.The study was funded by the Stowers Institute for Medical Research and the Burroughs Wellcome Fund.