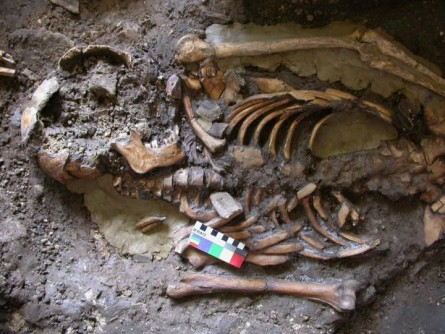 DNA was extracted from the molar teeth of this skeleton, dating from almost 10,000 years ago and found in the Kotias Klde rockshelter in Western Georgia.

Newswise — Scientists from Cambridge University have found the "fourth strand" of European ancestry. This population, discovered in the Caucasus mountains of Western Georgia survived for thousands of years, isolated from the rest of Europe due to the Ice Age. A small but significant portion of Europe's genome is derived from this unique population of hunter-gatherers, who came out of hiding, and mixed with the Yamnaya culture, which swept into Western Europe about 5,000 years ago.