A Gateway to Pan Exposed at Hippos 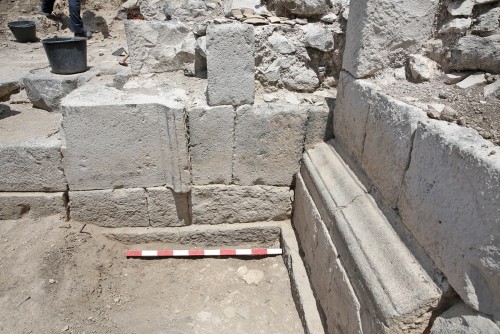 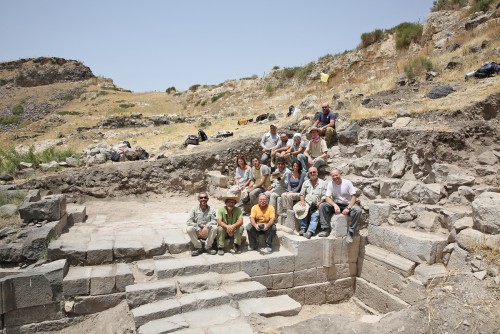 –the team that exposed the portal at the end of the day, next to the structure of the gate 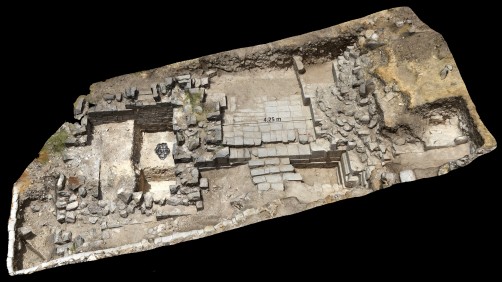 – an accurate photogrammetric model of the gates' structure, the two towers and the gate between them. The mask of Pan is placed where it was found. 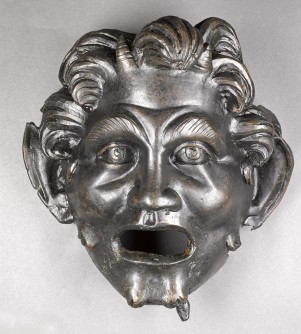 The mask of Pan after the preservation process

Newswise — Has the gate to the compound of the god Pan been discovered at Hippos (Sussita)? A monumental Roman gate discovered in the excavations by the University of Haifa at Hippos may cast light on the bronze mask of Pan – the only object of its kind found anywhere in the world – that was discovered in the same site during last year’s excavation season. “Now that the whole gate has been exposed, we not only have better information for dating the mask, but also a clue to its function. Are we looking at a gate that led to the sanctuary of the god Pan or one of the rustic gods?” wonders Dr. Michael Eisenberg, the head of the expedition.

Last year, researchers from the Zinman Institute of Archaeology at the University of Haifa made one of the most unique and unusual findings of recent years. They unearthed a bronze mask representing Pan, the god of shepherds. Half man and half goat, Pan also represents fields, music, and merriment. The discovery of bronze mask of this size depicting one of the gods was an innovation on the global level, a fact that seriously complicated efforts to date the item or explain its possible function. Dr. Eisenberg notes that until now it has only been possible to suggest hypotheses regarding the mask’s original functioning and to use artistic and stylistic criteria to propose a possible date for its casting.

The mask was discovered in the remains of a large basalt ashlar building, and the researchers assumed that uncovering the building would provide additional information about the unique object. As happens almost every year, Hippos did not fail to yield some surprises. The researchers were working on the hypothesis that the building formed part of the fortifications of the city, but as they dug deeper they found two square basalt towers with dimensions of approximately 6.30 meters x 6.30 meters and a portal of 3.7 meters wide in-between. The researchers concluded that the original gateway was over six meters high, while the building (propylaeum) itself was even taller. The propylaeum can probably be dated to the period of the Emperor Hadrian, who reigned from 117 to 138 CE, or slightly earlier. The mask was presumably fixed to a wall or altar at the compound, as its rear side included remnants of lead used for stabilization purposes. Now, however, the researchers can offer a fuller analysis regarding not only the mask’s dating, but also its function.“When we found the mask on its own, we assumed that it had filled a ritual function. Since we found it outside the city, one of the hypotheses was that we were looking at evidence of a mysterious ritual center that existed outside the city. However, as we all know, monumental gate structures lead to large compounds. Accordingly, it is not impossible that this gate led to a large building complex – perhaps a sanctuary in honor of the god Pan or one of the other rustic gods – situated just before the entrance to the city of Hippos,” Dr. Eisenberg suggests.

“The mask, and now the gate in which it was embedded, are continuing to fire our imaginations. The worship of Pan sometimes included ceremonies involving drinking, sacrifices, and ecstatic rituals including nudity and sex. This worship usually took place outside the city walls, in caves and other natural settings. We are very familiar with the city of Paneas to the north of Hippos, which was the site of one of the best-known sanctuaries for the worship of Pan. But here we find a monumental gate and evidence of an extensive compound, so that the mystery only gets stranger. What kind of worship of Pan or his fellow Dionysus, the god of wine, took place here in Hippos? To answer that question, we will have to keep on digging,” concludes Dr. Eisenberg.Since 2000, the ancient city of Hippos has gradually being unearthed by an international expedition under the auspices of the Institute of Archaeology at the University of Haifa. Hippos lies within Sussita National Park, which is managed by the Israel Nature and Parks Authority. The next excavation season will be held in July 2016, with the participation of dozens of researchers and volunteers from Israel and around the world.See: http://www.hippos.haifa.ac.il 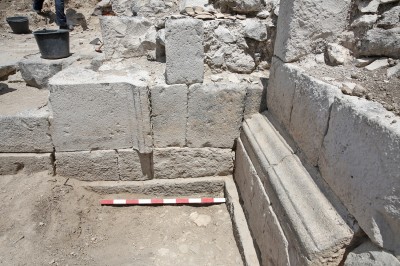 Caption: Expedition member Adam Pazout digging a test pit in the western tower of the portal 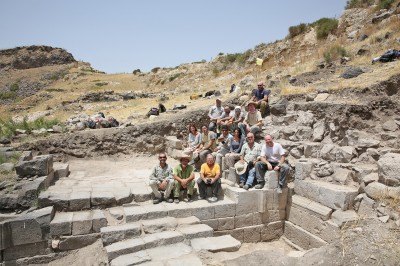 Caption: –the team that exposed the portal at the end of the day, next to the structure of the gate 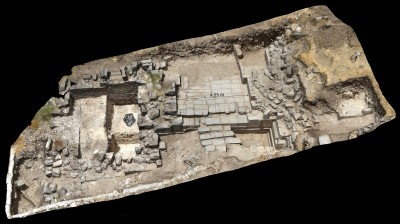 Caption: – an accurate photogrammetric model of the gates' structure, the two towers and the gate between them. The mask of Pan is placed where it was found. 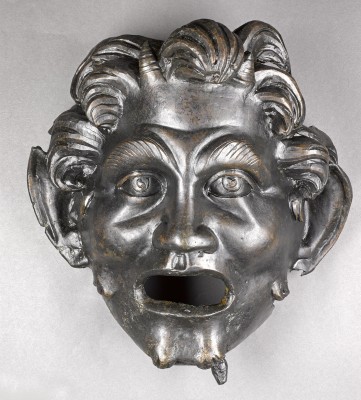 Caption: The mask of Pan after the preservation process