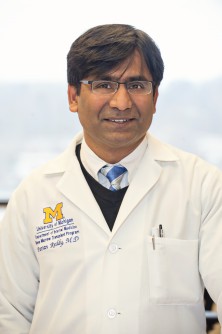 Newswise — With this question in mind, researchers began looking at whether the trillions of little bugs and bacteria living in our gastrointestinal tract could be the key to playing defense.

Up to half of patients who receive a bone marrow transplant from a donor will develop severe gastrointestinal damage from graft vs. host disease, a condition in which the donor cells attack the host’s body. It’s the reason why transplants – which can be very successful at eliminating cancers such as leukemia or lymphoma – are so risky.

In a new study, published in Nature Immunology, researchers searched for alterations in the gut microbiome to see whether their metabolites could impact outcomes after BMT.

They found that a metabolite called butyrate was significantly reduced in the intestinal tract of experimental mice that received bone marrow transplant. When the researchers increased butyrate in these mouse models, they saw a decrease in the incidence and severity of graft vs. host disease.

“Our findings suggest we can prevent graft vs. host disease by bolstering the amount of the microbiome-derived metabolite butyrate,” says study lead author Pavan Reddy, M.D., the Moshe Talpaz Professor of Translational Pathology and interim division chief of hematology/oncology at the University of Michigan.

“If the GI gut lining can remain healthy and strong, it can resist the attack by the donor immune system and hopefully prevent graft vs. host disease,” he adds.

The researchers found that shifts in the gut’s microbes result in a decrease in butyrate. When they manipulated the microbes back to the original form, the butyrate would come back up and mitigate graft vs. host disease.

Diet is one way to control butyrate production by the gut microbiome, specifically through resistant starch such as that found in potatoes. Researchers hope to begin a clinical trial later this year that will look at combining resistant starch with current methods of preventing graft vs. host to assess whether they can increase butyrate – and reduce graft vs. host.

“This is a whole new approach. The idea is to make the host cells stronger, to be able to withstand the assault of the donor immune cells while reducing the risk of infection or leukemia relapse,” Reddy says.

This work was done in collaboration with colleagues at the University of Michigan and Memorial Sloan Kettering Cancer Center.