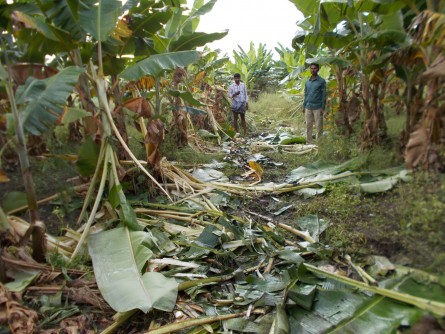 WildSeve assisted in filing 3,261 crop loss and property damage claims including this farmer who lost his banana crop to elephants

**NEWS RELEASE** Contacts:Mary Dixon, 347-840-1242, mdixon@wcs.orgDr. Krithi Karanth (India), 91-990-0902041, krithi.karanth@gmail.comStephen Sautner (NY), 718-220-3682, ssautner@wcs.org Mobile Technology Initiative, WildSeve:A Win-Win Solution for Farmers in Distress and Threatened Wildlife Species Nearly 1,000 Families Have Received or Are About to Receive Substantial and Fair Compensation WildSeve Is An Innovative Initiative of the Wildlife Conservation Society, Supported by Technology Leader Oracle “WildSeve allows us to respond to people instantly, help with the onerous process of claiming compensation, and tracks the efficacy of the entire process.” Dr. Krithi Karanth, WCS conservation scientist Newswise — Bengaluru, India (July 12, 2016) – A mobile technology initiative, WildSeve, is helping to address human-wildlife conflicts and has been implemented in 284 villages in India. WildSeve is a tool farmers and others can use to report a wildlife conflict incident, resulting in immediate assistance from WildSeve responders on motorcycles. This user-friendly mobile technology-based platform integrates a toll free number that farmers can call to report a wildlife conflict incident. The responders assist families in filing compensation forms with the government, including fair assessment of the damage, and - they act as intermediaries between people and government agencies, ensuring transparency. In just one year, the WildSeve team has helped file claims in 3,261 incidents of crop and property damage by elephants and other herbivores; 148 cases of livestock predation by big cats and wild dogs; 11 cases of injury; and 2 deaths among human victims of the conflict. Of these, 2,998 toll free calls came from Bandipura and 422 from Nagarahole. To date, nearly 1,000 families have either received or are about to receive substantial and fair compensation. Dr. Krithi Karanth, a conservation scientist with Wildlife Conservation Society (WCS) said, “WildSeve emerged from 7 years of my research on understanding the complexities of human-wildlife interactions across India and finding that compensation has a role to play in fostering tolerance toward wildlife. It offers a rare opportunity to help people directly affected by conflict in the hope that they will tolerate their losses and not retaliate against wildlife. It is a brilliant example of how creativity and innovation can bring technologists and wildlife conservationists together to develop simple solutions that can have powerful transformative impacts on society.” Added Dr. John Robinson, WCS Executive Vice President of Conservation and Science: “WildSeve is proving to be a good example of how technology is key to advancing conservation solutions. I applaud Dr. Krithi Karanth and collaborator Nikhil Velpanur for designing a simple solution for a complex challenge and Oracle for having the vision to fund it. I am optimistic that we can learn from this work and apply it globally.”“Oracle is extremely proud to support WildSeve,” said Colleen Cassity, Executive Director of Oracle Giving, which supports Dr. Karanth’s work at WCS as well as the work of other scientists and conservationists in India and Africa helping to save big cats in the wild as part of the National Geographic Society’s Big Cats Initiative. “It’s vital that we educate local communities on how to coexist and flourish with big cats and other wildlife in their backyards. Ensuring that famers affected by wildlife get help is equally vital. WildSeve is a simple, brilliant solution toward achieving both ends.” Addressing human-wildlife conflicts is one of the major challenges in wildlife conservation today. While populations of globally threatened species like the tiger, leopard, wild dog, and elephants are now rebounding in India’s wildlife reserves, research by Dr. Karanth found that fewer than one-third of nearby rural families experiencing crop loss, property damage, livestock predation, even human injury or death, received the government mandated compensation payment. Previous research by Dr. Karanth found that less than one-third of rural families in India experiencing crop loss, property damage, livestock predation as well as human injury and sometimes death, received the government mandated compensation payment around India’s wildlife reserves in which populations of globally threatened species like the tiger, leopard, wild dog, elephants are now rebounding. In 2015, Dr. Karanth launched WildSeve in 284 villages surrounding Bandipura and Nagarahole National Parks, two of India’s premier tiger reserves. ‘WildSeve,’ a non-profit conservation initiative, works as an intermediary between farm families facing economic losses and the State Forest Department mandated to help them. Over the long term, WildSeve through its thousands of case histories will build a system that identifies high conflict regions, villages and vulnerable families that require short and long term assistance. In one year it has identified 787 families who experienced multiple incidents of crop raiding and 18 families who lost livestock repeatedly. WildSeve was developed by the WCS India program in collaboration with technology entrepreneur Nikhil Velpanur (a TED Fellow) and his team. Velpanur said “that he was inspired by listening to Krithi speak of her work at INK and offered to help in any way.” WildSeve is a product of this collaboration. He states that he is “humbled by the impact and the WCS field staff are the true heroes of WildSeve.” WildSeve was supported by Oracle, The Rufford Foundation and National Geographic Society’s Big Cats Initiative. ### WCS (Wildlife Conservation Society)MISSION: WCS saves wildlife and wild places worldwide through science, conservation action, education, and inspiring people to value nature. To achieve our mission, WCS, based at the Bronx Zoo, harnesses the power of its Global Conservation Program in nearly 60 nations and in all the world’s oceans and its five wildlife parks in New York City, visited by 4 million people annually. WCS combines its expertise in the field, zoos, and aquarium to achieve its conservation mission. Visit: newsroom.wcs.org Follow: @WCSNewsroom. For more information: 347-840-1242.