A Hot Cup of Attention Tempered with Chocolate, Please 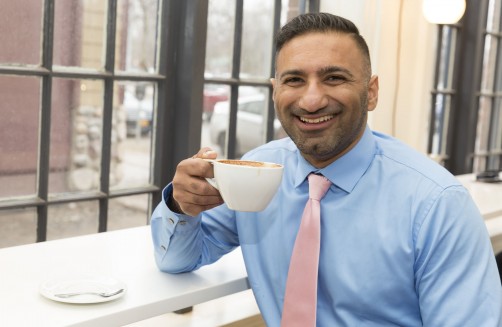 Clarkson University researcher Ali Boolani (above) recently completed a study that explores the powers of cocoa and caffeine.

Newswise — Deep down, we always knew it, but science is proving that cocoa and caffeine are indeed the best marriage ever. Clarkson University researcher Ali Boolani recently completed a study that explores the powers of these two dark delights.

The assistant professor of physical therapy and physician assistant studies teamed up with colleagues at the University of Georgia to examine the “acute effects of brewed cocoa consumption on attention, motivation to perform cognitive work and feelings of anxiety, energy and fatigue.”

In a nearly year-long double-blind study, some lucky test subjects drank brewed cocoa, cocoa with caffeine, caffeine without cocoa, and a placebo with neither caffeine nor cocoa. Then they were asked to do tests to evaluate both cognitive tasks and mood.

Before you envy the test subjects too much, bear in mind they had to work for the warm drinks. For example, they were asked to watch as letters flashed across a screen and note when an “X” appeared after an “A.” They also had to point out when odd numbers appeared sequentially, and they were required to do subtraction.

“The results of the tests are definitely promising and show that cocoa and caffeine are good choices for students and anyone else who needs to improve sustained attention,” says Boolani.

Here's the best news for the rest of us: The Hershey Company sponsored the research, so customers logically could see some new or enhanced products on the market as a result.

“I'll be doing some related and follow-up studies at Clarkson to look at differences in natural vs. synthetic caffeine, and other cocoa studies” Boolani adds. “I'm excited about them.”

Heads up. He'll be looking for more test subjects.

Clarkson University educates the leaders of the global economy. One in five alumni already leads as an owner, CEO, VP or equivalent senior executive of a company. With its main campus located in Potsdam, New York, and additional graduate program and research facilities in the Capital Region and Beacon, N.Y., Clarkson is a nationally recognized research university with signature areas of academic excellence and research directed toward the world's pressing issues. Through more than 50 rigorous programs of study in engineering, business, arts, education, sciences and the health professions, the entire learning-living community spans boundaries across disciplines, nations and cultures to build powers of observation, challenge the status quo and connect discovery and innovation with enterprise.