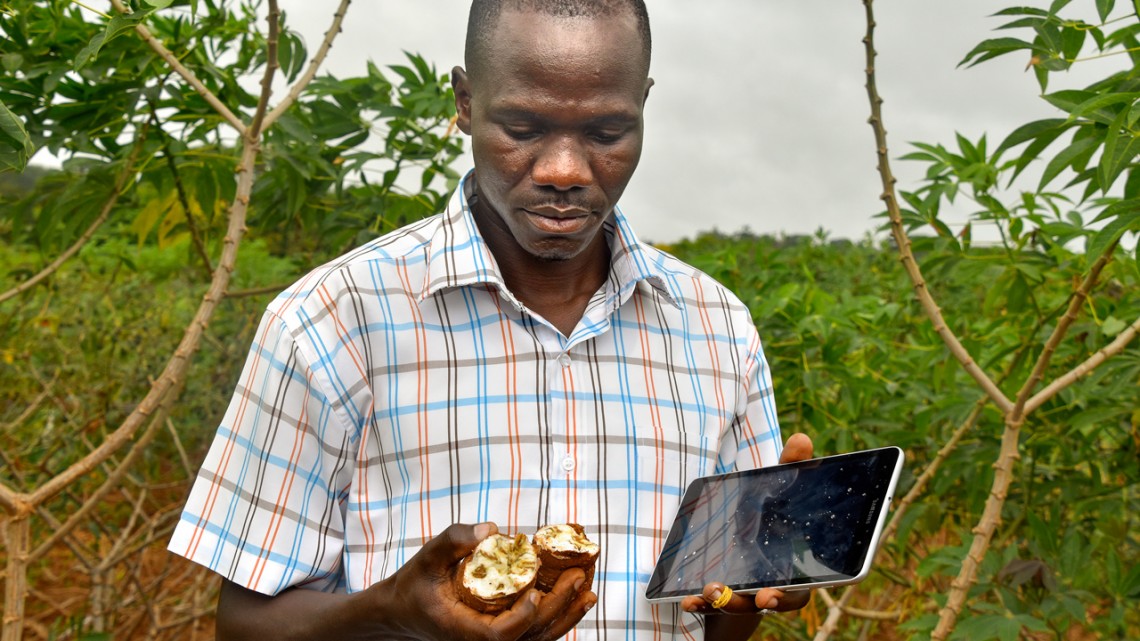 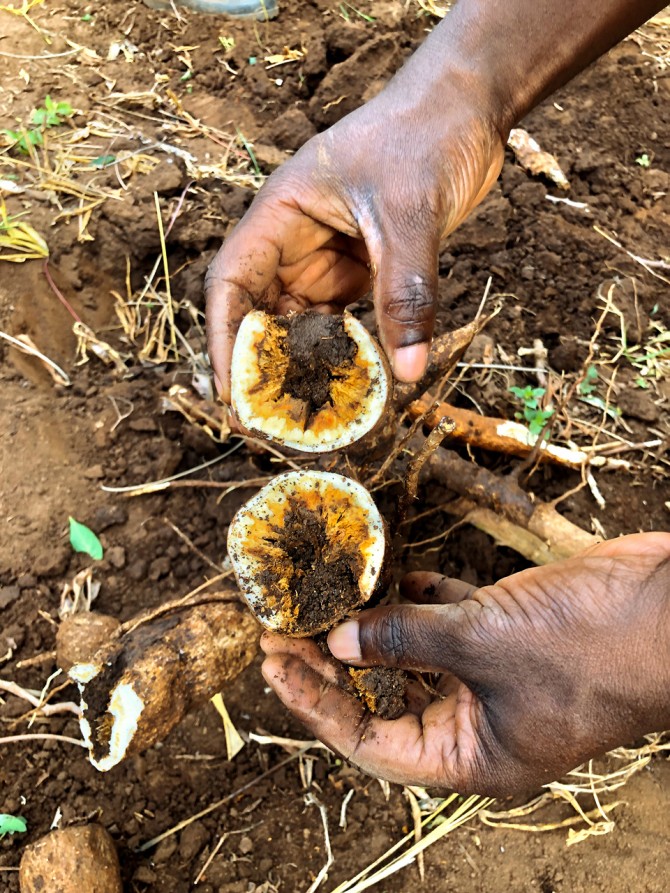 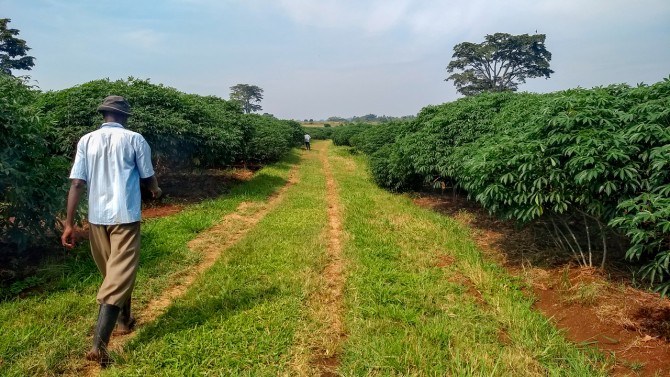 Cassava, a woody shrub, grows in a research field in Uganda run by the International Institute of Tropical Agriculture, an institutional partner of NextGen Cassava.

Newswise — ITHACA, N.Y. – Cassava dominated Alfred Ozimati’s childhood in Uganda. The leafy shrub grew high in the fields of his parents’ farm; posho, a porridge made from its starchy root, was served at nearly every meal. And the money his family earned from the crop paid for his primary education.

“Cassava is our daily food in Uganda,” says Ozimati, a plant breeder working for a national program in his country. “It’s what we grew up with and what we still love.”

That food – and the livelihood of millions of farmers like Ozimati’s parents – face a dire threat from a disease that rots cassava from its roots. Named cassava brown streak disease for the discoloration it causes in the plant’s fleshy edible pulp, the pathogen ravaged Uganda and other countries of East Africa starting in the early 2000s, causing total yield loss in susceptible plants. From there it spread and now infects major growing portions in central and southern Africa as well as in the east, where it first emerged.

“All of the best varieties in existence at the time were wiped away by cassava brown streak disease,” Ozimati says. “You can’t grow anything when it strikes.”

For centuries cassava has served as subsistence crop critical to food security in Africa. Africa’s smallholder farmers produce about 86 million tons of cassava each year – more than half of the world’s total – and more than 500 million people in Africa consume it daily.

Ozimati and others see cassava as much more: a crop with vast commercial potential that could not only feed hundreds of millions but also create prosperous jobs and new industries in Africa.

“But if we can’t address these problems with disease resilience, then the next steps are impossible,” he warns.

At Cornell University, earning his doctorate in the field of plant breeding, Ozimati steeped himself in the study of genomics as he unraveled the genetic background of varieties favored in East Africa. After finishing his doctorate he returned home and joined the National Crops Resources Research Institute, one of six research hubs in Uganda.

Now, thanks in large part to the work of the NextGen Cassava project run by Cornell, he is working at the leading edge of agricultural science, using the tools of genomic selection to breed cassava that is disease resistant and meets the consumer preferences of subsistence farmers.

The project supports breeders like Ozimati in Uganda and in countries all over sub-Saharan Africa. The goal is to empower farmers through innovative, sustainable cassava breeding.

NextGen Cassava, funded by the Bill & Melinda Gates Foundation and UK Aid, supports multidisciplinary scientists with advanced technologies and methods. It combines the expertise of teams of scientists from Africa, the U.S. and points around the world, as teams in breeding, genomics, data management and other advanced fields work together to share knowledge and simultaneously tackle problems from multiple angles.

“At NextGen Cassava we take an interdisciplinary approach, teaming brilliant scientists together to collaborate, learn and make a lasting impact for the farmers and consumers who rely on cassava,” says Chiedozie Egesi, project director for NextGen Cassava and visiting scientist in the Department of Global Development.

Genomic selection uses advances in the marker-assisted selection techniques first developed at Cornell in the 1980s and 1990s. The powerful tool allows scientists to “read” the genome and make predictions about how plant varieties will behave: how much they will yield, how resilient they are to disease, even how they will respond to the milling needed to make flour.

With that information in hand Ozimati works with breeders to interpret the results and move forward varieties that will most likely possess the traits farmers and consumers desire. “By blending the genomic data with the phenotypic data already in the breeding program, we are able to make better decisions,” he says.

Ozimati sees cassava at a turning point. If researchers can breed varieties resistant to brown streak disease, it will catalyze momentum to focus on industry-preferred traits and to turn cassava into an industrial crop at large scale. The hope is that in the future, traditional subsistence farmers will be able to consider ways to turn their farms into viable commercial operations. Already in Uganda, brewers are turning cassava into beer, and homegrown pharmaceutical industries see potential in the crop.

It’s a long road with many challenges, but one that inspires Ozimati to make a difference for his country.

“It’s the passion for science,” he says, “that is pushing me to do what I do.”

Caption: Cassava, a woody shrub, grows in a research field in Uganda run by the International Institute of Tropical Agriculture, an institutional partner of NextGen Cassava.