A Library for Food Security

Newswise — Dec. 21, 2016 - Tim Close has found himself, happily, stuck in a library. But it’s not your typical library with shelves and books. It’s a genetic library of cowpea varieties, also known as black-eyed peas. This genetic library tells us stories about the crop’s unique qualities.

“Think of the books in a library’s history section like the samples of cowpea that have been farmed for millennia, and those from the wild – the cowpea ‘germplasm,’” Close says. “Every book is a unique assembly of letters and words, but each is about some aspect of history. Similarly, every cowpea has a unique assembly of genetic ‘words,’ embodied in the DNA sequence, yet each is a cowpea. Genes are located and marked by their position in the genome, just like page numbers in a book.”

Close is a researcher at University of California-Riverside (UCR). The university’s collection holds 6,000 cowpea samples, the third largest collection of cowpeas worldwide. Approximately 37,000 genes—the genetic pages, if you will—lie within each of these samples. Cataloging this genetic library means crop scientists can be more directed and purposeful in conventional plant breeding.

Cowpeas are also known as black-eyed peas, a star of traditional dishes in Southern United States’ cooking. Hoppin’ John, a dish featuring cowpeas, is considered by many a “must-have” New Years’ meal to bring good luck. Nutritionally, cowpeas certainly start the new year right. In addition to protein, they are rich in iron, fiber, folic acid, and other nutrients. The first recorded cowpea crop in the U.S. goes back to 1775 in Florida. Cowpeas were such an important U.S. crop that until the 1930s, U.S. growers grew more acres of cowpea than soy.

Around the world, cowpeas continue to be a major food source, providing food security. West Africa currently leads world production of this crop, valued for the many ways it provides sustenance. While cowpeas are growing, the plant’s leafy greens can be picked and eaten like spinach. This happens in a season when few other foods are available. Next, the protein-rich pods can be eaten fresh from the field. Later, the mature, dried pods can be harvested and hulled to provide the shelf-stable cowpeas themselves, or ground into flour. Finally, the leftover cowpea plants can be used as feed for livestock.

Most remarkable, however, is cowpeas’ ability to grow in difficult conditions. “Cowpea’s resilience is the main reason why it is the number one source of protein in the human diet in sub-Saharan Africa. There, it is an essential component of food security,” Close says.

There is a surprising variety of cowpeas—some with a wrinkled texture, others with brown instead of black “eye” spots. And there are differences the consumer will not notice: How long do they need to grow before harvest? Are they tolerant to drought, heat, or cold? Does the plant have spindly or bushy growth that affects harvest? Will the plants fall over and spoil the seedpods before harvest? Is it easy to pick? What natural resistance to pest or disease does the plant possess?

The UCR Coachella Valley Agricultural Research Station serves as a local testing site for Close and his team. The desert conditions there successfully mimic those in sub-Saharan Africa where warm weather occurs during short days. The varieties that are grown in Africa will flower and set seed only if the period of sunlight is less than twelve hours. The crop scientists are able to observe plants’ growing habits and select parent plants with desired characteristics.

“We’re using genetic information to make informed decisions,” he says. “You have an idea of the parents you want to cross, extract the DNA, and see what you have genetically. You can then make genotype-informed decisions.”

Scientists painstakingly hand-pollinate parent plants to create offspring with stronger qualities. The DNA of these offspring is also confirmed before pollination for the next generation. The final cowpea variety, several generations later, emerges with offspring showing the desired qualities.

The process involves a team at UCR in collaboration with partners in five African countries: Burkina Faso, Ghana, Nigeria, Senegal, and Mozambique. The UCR team and collaborations with African researchers were started by Anthony Hall in the 1970s. Hall retired in 2003 and the UCR team evolved since then under the joint leadership of nematologist Phil Roberts, plant breeder Jeffrey Ehlers, computer scientist Stefano Lonardi, and Close.

In both California and Africa, data is gathered in the field: Does the pod harvest easily? Does it sell well at market? Is the cooking time shorter? Crop scientists must deliver the traits that meet producer needs in addition to environmental realities. Matching the trait data to the genetic identity of each line adds efficiency to the process of variety development.

While many desirable traits have been nurtured, nature does not take holidays. New challenges—pests, diseases, drought—emerge. Additionally, sometimes seed stocks become contaminated with off-types that lack all of the desired qualities. Being able to look up the answer in a genetic library assures an intelligent response to urgent questions.

Close is optimistic. “Cowpeas are a critical food crop in sub-Saharan Africa. The research is closely related to food security; it’s very gratifying. Like any crop that gets attention from breeders, cowpea yields in the U.S. can also be steadily increased in high-input production systems. Yield gains of a several percent per year over the next 20 years are well within reason.”

Understanding cowpeas also brings the potential of other crop improvements. “Discoveries that explain cowpea’s heat tolerance and drought adaptability can lead to new ideas for improvements of soybean, common bean and other related legumes,” Close notes. “In that context, there is potential for cowpea to become the most valuable model crop plant in the 21st century – a premiere example of basic research translated into food security.”

As crop scientists pull together desired qualities to feed a growing world, the library of cowpea genetics could be an invaluable resource moving forward.

Close presented at the Annual Meeting of the Agronomy, Crop, and Soil Science Societies in Phoenix, AZ, November 6-10, 2016. The work summarized by Close is presently supported through the U.S. Agency for International Development (USAID) by the U.S. Government’s Feed the Future program, specifically the Innovation Lab for Climate Resilient Cowpea and the Legume Innovation Lab. Other funding sources that have enabled progress in recent years are the Generation Challenge Program of the Consultative Group on International Agricultural Research, the U.S. National Science Foundation, and the U.S. Department of Agriculture National Institute of Food and Agriculture program.

Dried beans such as cowpeas are part of a food group known as pulses. The United Nations Food and Agriculture Organization declared 2016 the International Year of Pulses (IYP). In celebration, the Crop Science Society of America (CSSA) created a web page for the public about pulses, www.crops.org/iyp. Special tabs for the public include K-12 Education, Beans in the News, Grown Your Own, and Delicious Ideas. CSSA has also compiled links to various recipes, so you can increase your consumption of pulses.

CSSA continues to release information about pulses during the 2016 IYP celebration. 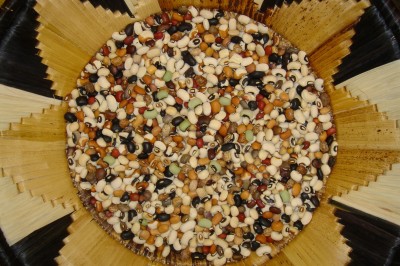 Caption: Tweezers are an indispensable tool when it comes to delicate hand pollination of cowpea plants. 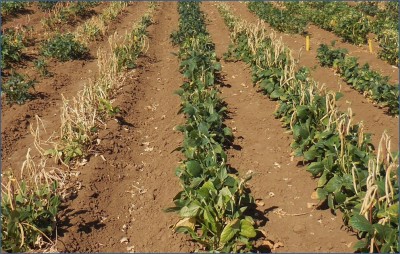 Caption: This field on the UC Riverside campus has three different breeding lines of cowpea. Their responses in this water-limited condition are part of their genetic diversity.