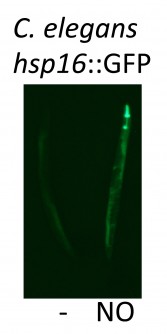 This image shows the worm glowing fluorescence in response to NO. It expresses one of the stress/anti-aging genes, hsp16, in response to nitric oxide.

Newswise — NEW YORK, Feb. 14, 2013 – Nitric oxide, the versatile gas that helps increase blood flow, transmit nerve signals, and regulate immune function, appears to perform one more biological feat— prolonging the life of an organism and fortifying it against environmental stress, according to a new study.

The study reveals that a roundworm called Caenorhabditis elegans, an animal widely used in laboratory studies of aging, lives significantly longer when fed bacteria capable of manufacturing nitric oxide. The tantalizing observation points to one of the mechanisms by which the microbiome, the trillions of microbial cells inhabiting our bodies, may play a vital role in our health.

Our own nitric oxide levels decrease as we get older, a decline that may contribute to normal aging, says Evgeny Nudler, PhD, the Julie Wilson Anderson Professor of Biochemistry at NYU Langone Medical Center, who led the new study. Supplemental bacteria, he speculates, might provide a healthy boost by supplying humans with some of the missing compound.

“In worms, we now know that bacteria can use nitric oxide not only to their own advantage but also to provide their host with a beneficial response, and the same thing could be true in a human gut,” says Dr. Nudler. “It may well be the case that our commensal bacteria control some of our genes, at least in the gut, to protect those cells against stress and age-related decline.” Commensal bacteria provide a benefit to the organisms they colonize.

Although humans and many other organisms have the enzyme needed to produce nitric oxide, C. elegans does not. Instead, Dr. Nudler and his team report in the February 14th online issue of Cell that the worm can “hijack” the compound from the soil-dwelling Bacillus subtilis bacterium that is not only a favored food but also a common colonist within its gut. This resourcefulness, Dr. Nudler says, partially explains why worms fed B. subtilis live roughly 50 percent longer than counterparts fed Escherichia coli, which does not produce the compound.

Fluorescent labeling and other tests also demonstrated that B. subtilis-derived nitric oxide penetrated the worms’ tissues, where it activated a set of 65 genes. Some had been previously implicated in stress resistance, immune response, and increased lifespan, though others have unknown functions. Importantly, the researchers showed that two well-known regulatory proteins were essential for activating all of the genes.

“What we found is that nitric oxide gas produced in bacteria inside the worms diffuses into the worm tissue and activates a very specific set of genes acting through two master regulators, hsf-1 and daf-16, resulting in a high resistance to stress and a longer life,” Dr. Nudler says. “It’s striking that a small molecule produced by one organism can dramatically affect the physiology and even lifespan of another organism through direct cell signaling.”

As part of nitric oxide’s expansive repertoire, Dr. Nudler’s lab previously showed how dangerous pathogens can exploit the molecule to fight off antibiotics. Despite its versatility, the new research suggests that nitric oxide is only one of multiple beneficial molecules produced by B. subtilis, Dr. Nudler says. His lab plans to look more closely at other potential mechanisms by which commensal bacteria can promote health and longevity, using the powerful and easily manipulated C. elegans system as a model.

The study co-authors include Ivan Gusarov, Laurent Gautier, Olga Smolentseva, and Ilya Shamovsky from the Department of Biochemistry and Molecular Pharmacology at NYU Langone Medical Center; and Svetlana Eremina and Alexander Mironov from the State Research Institute of Genetics and Selection of Industrial Microorganisms in Moscow, Russia.

The research was supported by the National Institutes of Health, the Biogerontology Research Foundation, and the Dynasty Foundation.

About NYU Langone Medical CenterNYU Langone Medical Center, a world-class, patient-centered, integrated, academic medical center, is one on the nation’s premier centers for excellence in clinical care, biomedical research and medical education. Located in the heart of Manhattan, NYU Langone is composed of four hospitals – Tisch Hospital, its flagship acute care facility; the Hospital for Joint Diseases, one of only five hospitals in the nation dedicated to orthopaedics and rheumatology; Hassenfeld Pediatric Center, a comprehensive pediatric hospital supporting a full array of children’s health services; and the Rusk Institute of Rehabilitation Medicine, the world’s first university-affiliated facility devoted entirely to rehabilitation medicine– plus NYU School of Medicine, which since 1841 has trained thousands of physicians and scientists who have helped to shape the course of medical history. The medical center’s tri-fold mission to serve, teach and discover is achieved 365 days a year through the seamless integration of a culture devoted to excellence in patient care, education and research. For more information, go to www.NYULMC.org.