A Little Place for My Stuff 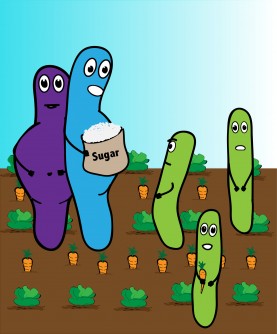 Fat makes cells fat. Bacterial cells in carbon-rich media (purple and blue) grow twice as big as those in carbon-poor media (green). New research shows they can grow big, however, only if they can make fats with the carbon.

Newswise — In his classic comedy routine, "A Place for your Stuff," George Carlin argues that the whole point of life is to find an appropriately sized space for the things you own.  What holds for people is also true for bacteria.

Just as people endlessly calculate how to upsize or downsize, bacteria continually adjust their volume (their stuff) to fit inside their membrane (their space). How they do this is not obvious: Petra Levin's lab at Washington University in St. Louis has spent years trying to figure it out.

The lab had made considerable headway but still couldn't entirely explain why some cells grew to two or three times the size of others. So they tried a new approach, looking at biosynthesis rather cell-cycle control (the coordination of division and growth), which had long been the focus of the cell-size field.

What fell out of this work was a stunningly simple revelation published online June 19 in Current Biology. Fat (lipids) limits how big bacterial cells can be. "If you prevent cells from making fat, they're smaller, and if you give them extra fat or allow them to make more fat, they get bigger," said Levin, professor of biology in Arts & Sciences. "Fat makes cells fat."

"It makes sense when you think about what lipids do," said Stephen Vadia, a postdoctoral research associate in the Levin lab and the lead author on the paper. "The membrane that defines the boundary between the inside and outside of the cell is made almost entirely of fat. So it’s not really surprising that fat synthesis would limit cell size.

"I thought, 'Well, this seems pretty obvious, now that I see the data in front of me,'" he added, punctuating with a laugh.

Scientists had been gnawing on this particular bone for many years. The basic question goes back to studies done in the 1950s, said Vadia. Scientists grew the bacteria Salmonella typhimurium in more than 20 different media with varying nutrient compositions. In the nutrient-poor media, the cells grew slowly and were small; in the nutrient-rich media, they grew faster and were larger.

"This is the basic observation that we're trying to understand," Vadia said. "Why do rapidly growing cells that are given a lot of nutrients end up a lot bigger than slow-growing cells in nutrient-poor environments?"

The cells in nutrient-poor media are about one-half to one-third the size of the fat cells in nutrient-rich media, he said. Previous work in the Levin lab had been  able to account for 20 percent of that size difference but still didn't understand what was responsible for the additional 80 percent shrinkage.

"Ultimately, what cells do with nutrients is take them apart and use them as building blocks to synthesize new molecules," Vadia said. "So we wondered whether biosynthetic capacity had something to do with the size differences. And if biosynthesis was behind it, was it biosynthetic capacity in general? Or are particular biosynthetic pathways important for cell size?"

To find out, they added antibiotics to cultures of Escherichia coli and Bacillus subtilis that separately inhibited each of three major biosynthetic pathways. Inhibiting RNA synthesis or protein synthesis had a negligible effect on cell size. "But if we hit the cells with an antibiotic that targets fatty-acid synthesis, we really saw a significant drop in cell size," Vadia said.

"It doesn't seem to matter what the lipids are, really," Levin said, "provided you have enough of them. We found we could give the cells oleic acid, a fat found in avocados and olive oil, to supplement diminished fatty-acid synthesis and as long as the added fatty acid got into the membrane, the cells could recover."

Unlike many cellular processes, this one doesn't appear to be regulated by an elaborate network of protein signals, she said. The membrane is literally just a bag, and how big that bag is determines how big the cell can grow.

"I was surprised that lipids were so dominant over proteins, because they've been kind of ignored," she said.

"People don't think about lipids," Vadia said. "It probably goes back to the central dogma of biology that we're all taught: DNA makes RNA makes protein, and proteins do everything. Lipids have been regarded as a sideshow."

But the scientists weren't done yet. "We knew that mutants that could not make a signaling molecule called guanosine tetraphosphate (ppGpp) were very sensitive to things that inhibited lipid synthesis, but nobody really understood why," Levin said.

So next the lab ran experiments to track down the role of ppGpp in cell size. This molecule is an alarm signal, Vadia said. If E. coli encounters dire living conditions it starts to synthesize ppGpp, which shuts down DNA synthesis, protein synthesis, fatty-acid synthesis, and ribosome production, putting the cells in a quasi-dormant state (this is called "the stringent response").

Under nutrient-rich conditions, ppGpp levels are extremely low, but as bacterial cells begin to starve they begin to rise.

To figure out more, Vadia exposed an E. coli mutant that cannot make ppGpp to an antibiotic that shuts down fatty-acid synthesis. Able to make more stuff but unable to make a bigger bag to put it in, the cells began to lyse, bursting at the seams.

"It's like the Incredible Hulk," Levin said. "Rising levels of ppGpp tell the cell, ‘OK, we're not making enough lipids; you've got to turn down these other things you're making or we'll burst through our clothing.’"

Again, the scientists tried pushing things the other way as well. They grew cells that overproduced both a ppGpp synthase and FadR. So these cells had high ppGpp, even in nutrient-rich conditions, which would normally make them small, but they also had high FadR, which allowed them to take advantage of the available nutrients to increase lipid synthesis.

Given enough lipids to grow a bigger bag, these cells bulked up.

"So lipids really dictate the size of everything else," Levin said. "There's a signaling pathway that says, ‘OK, we're getting way too big for our britches, we have to shut down, stop eating so much, stop making so much.’

"This is true for the eukaryote Saccharomyces cerevisiae (yeast) as well as for E. coli and B. subtilis," she said. "It's probably true — I would be shocked if it’s not — across all organisms: that lipids limit the size of individual cells."

Levin continued: "These experiments are the most fun thing we've ever done. So many ideas that had been ill-defined suddenly snapped into focus, which is what every research scientist hopes for."