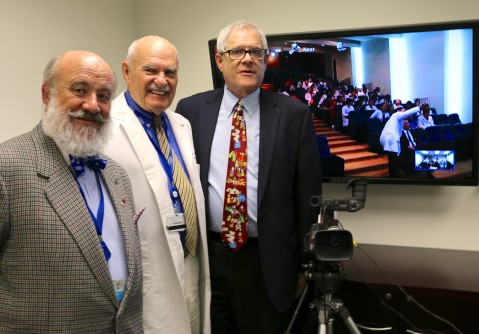 The physicians gathered at their respective institutions in Los Angeles and Ulaanbaatar, Mongolia’s capital, and communicated via telemedicine conference. Tuesday’s event began at 4:30 pm PST and at 8:30 am Mongolia time. “This partnership has helped raise the standard of care for children in Mongolia,” says Richard MacKenzie, MD, medical director of the Center for Global Health at Children’s Hospital Los Angeles, and deputy director of the hospital’s Division of Adolescent Medicine. “This event commemorates two decades of working together to achieve this goal and establishes a new collaborative agreement to build on efforts in education, telemedicine, research and physician exchange programs.”

“CHLA faculty and residents have provided important assistance to NCMCH and its affiliated medical school in the development of their pediatric clinical programs and training, as well as consulting on many patients over the past 20 years,” says Stuart E. Siegel, MD, director of the Center for Global Health at CHLA. “It has been a dream of ours to provide this service from CHLA and now the NCMCH has the tele health technology capacity that will allow us to contribute and pass on our program development and care more efficiently.”

Since the collaboration began in 1995, instigated by academician Arnold Springer, PhD, a retired Cal State Long Beach professor and an authority on Russia, the health care of Mongolian children has benefitted from the care and training by CHLA physicians traveling to NCMCH at their own expense to treat cases in children’s cancer, cardiology, infectious diseases, intensive care, pulmonology, gastroenterology, pediatric general and orthopedic surgery, endocrinology, adolescent medicine and rheumatology.

The relationship also has nurtured a research component. In 2014, Scientists from Los Angeles and Ulaanbaatar published a study that reported that burning coal for domestic heating may contribute to early fetal death. "CHLA and colleagues in government and academia in Mongolia are expending concerted efforts to improve stove efficiency and to educate the public about correct and more efficient lighting and heating methods,” says study leader David Warburton, OBE, DSc, MD, MMM, FRCP, FRCS, FRCPCH, professor of Pediatrics and Surgery at The Saban Research Institute of Children’s Hospital Los Angeles. “Mongolians are wonderful, smart, warm people,” says Warburton. “They listen to and appreciate our advice and are acting on it as gross domestic product has risen and resources become increasingly available in their country. We have seen impressive changes over the past decades and now look forward to further collaboration.”

Recently, the relationship between the institutions has been reinvigorated by Mongolia’s successful infrastructure additions and infection control protocols at the NCMCH. This now allows CHLA physicians to work with colleagues to treat more complex cases. "Over the past 20 years, we have helped to guide the NCMCH into providing improved pediatric care through development of knowledge, skills and hospital facilities,” MacKenzie says. “We now stand prepared to further assist as they develop the expertise and technology to provide advanced pediatric and surgical care practiced in the 21st century."