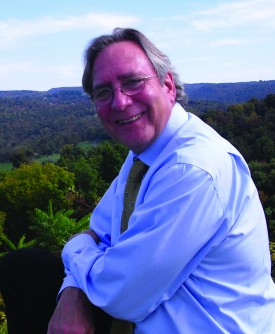 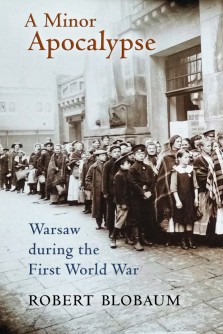 A Minor Apocalypse: Warsaw during the First World War

Until now, the only existing social history of Warsaw during World War I was written in 1974, while Poland was under the Communist government. Krzysztof Dunin-Wasowicz’s “Warsaw during the First World War,” written in Polish, offers a limited historical account. It fails to include a comparison to other countries or to World War II, and ignores the role of gender and ethnicity in the historiography.

West Virginia University historian Robert Blobaum seeks to address these issues in his new book, “A Minor Apocalypse: Warsaw during the First World War.” It is the first history of Warsaw to ever appear in English.

The book explores the social and cultural history of Warsaw's "forgotten war" of 1914-1918. It demonstrates how lack of access to resources created social and cultural divisions, including a tension in Jewish-Polish relations and between men and women.

“Certain issues were not addressed at all in the first book. It was written from a Polish perspective using only Polish sources, and the historiography has moved on,” said Blobaum, the Eberly Family Professor of History. “Good historical writing, especially about that part of the world, needs to address these sorts of issues. Other studies are being done about other cities that focused on those kinds of problems, but there isn’t one for Warsaw. That’s why it was necessary to write this book.”

In the book, Blobaum considers how Warsaw’s position differed from other European cities during World War I—especially capital cities like Berlin, London, Paris and Vienna. Varsovians had a very different experience living in a frontline city that was part of the Russian empire during the first year of the war.

Warsaw was also a deeply divided city because of its slight Polish majority and substantial Jewish minority. But despite being under Russia’s military control for the entire first year of the war, Varsovians were extremely loyal to the Russian cause.

Human suffering in Warsaw is another experience that is often misinterpreted, particularly during the subsequent German occupation.

Blobaum writes in the book’s introduction, “By the second winter of the war many Varsovians already looked nostalgically on what seemed to be an irretrievable lost past, as their city experienced rapidly escalating incidences of starvation, disease, death and conflict over the increasingly scarce resources necessary to sustain human life.”

Because of the level of hunger and German restrictions on food supplies coming into Warsaw, food smugglers played an important role in both wars. During World War II, they are often portrayed as heroes in Polish memoirs. However, they were far less respected by Poles during World War I, partly because they tended to be Jewish, but also because their activities failed to make up the difference between the rationed calories and those needed to avoid malnutrition.

“Another thing I found surprising was that for a good part of the Polish population, they were just as bad off if not worse than during the second world war,” Blobaum said. “For Poles in the First World War, we’re talking about higher unemployment and greater food shortages—what people with and without earnings actually ate, either legally or illegally—those measures of living conditions were probably better for Poles during the Second World War than during the first.

Transportation in Warsaw during the two wars can also be compared. It was much easier to get around Warsaw during World War II because of the availability of trolley cars. During the First World War, the trolleys stopped running due to the lack of electricity, and residents were less likely to even have shoes due to leather shortages, which was requisitioned by the Germans.

Many of the gaps in Warsaw’s wartime history can be attributed to censorship of the press.

Warsaw’s daily Polish-language newspaper was emphatically pro-Russian at the beginning of the war. More expansive press freedom came about during the Russian Revolution of 1905, which led to the establishment of several new periodicals, including some printed in Yiddish and Hebrew. The Russian government was suspicious of these Jewish publications during the first year of the world war, resulting in significant self-censorship. Eventually, all Yiddish and Hebrew publications were banned. After the German regime occupied Warsaw a year into the first world war, censorship expanded further.

“The Germans were well aware of the politically destabilizing effects of the ever-deteriorating living conditions in the city, to which their policies of requisitioning and control of resources were the main contributing factors,” Blobaum wrote in the introduction. “Thus, reporting on those conditions and their consequences became increasingly taboo, particularly following the establishment of preventative censorship on Sept. 25, 1915.”

As a result, the city’s major food riots in June 1916 and May 1917, a reflection of the aforementioned human suffering and malnutrition, were not reported by the legally-registered media.

Women and the Jewish population are also absent, not only from the historiography, but also in public memory and monuments. Blobaum dedicates an entire chapter to women’s roles in the home front, highlighting their participation in the labor force and in advocating for social justice.

“The resurrection of an independent Polish state in the aftermath of the First World War was accompanied by the establishment of equal political rights and suffrage for women, a cause that had minimal support before the war but was accepted after the war with little public debate or dissent,” Blobaum said.

Press censorship during the war proved to be challenging as Blobaum conducted research for the book over the last 10 years. In addition to the press, he utilized archives, local government records, memoirs and diaries to compile the history.

“Because dealing with Polish history at this time involved the use of multiple languages—Polish, Russian and German, in particular, I had to work in a number of different archives,” Blobaum said. “Even though a lot of what had existed before 1939 was destroyed during the Second World War, there were still some things that were eventually retrieved, especially from Russia and from private collections, or had been distributed in multiple copies that I could use.”

The idea for the book’s title came to Blobaum after reading a Polish novel of the same title by Tadeusz Konwicki about an instance of opposition to Communism that took the form of self-immolation.

“I read the novel in the 1970s, and the title always stuck with me,” Blobaum said. “I chose it for its sense of irony because Poles frequently think of the Second World War as apocalyptic, but they don’t see the First World War in any kind of similar terms. In part, the use of that title was to draw this contrast to the Second World War, but also to say that the first (world war) was apocalyptic in ways as well.”