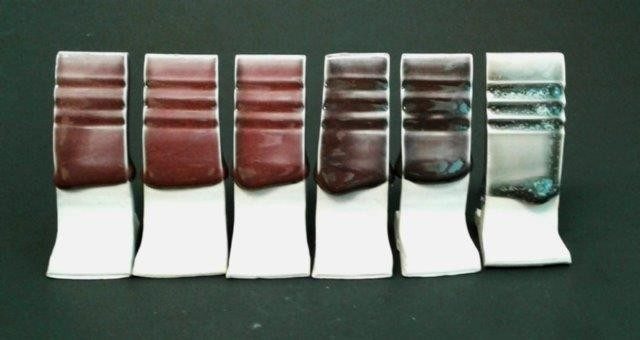 Ceramic samples were coated with a cost-effective, vibrant glaze made with gold and silver salts that are less toxic than most other colorants.

Newswise — WASHINGTON, March 23, 2020 — Making your own ceramics can be a way to express your creativity, but some techniques and materials used in the process could spell bad news for your health and the environment. If not prepared properly, some glazed ceramics can leach potentially harmful heavy metals. Scientists now report progress toward a new type of glaze that includes gold and silver nanoparticles, which are less toxic and more environmentally friendly than currently used formulations, while still providing vibrant colors.

The researchers are presenting their results through the American Chemical Society (ACS) SciMeetings online platform.

Glazes make ceramics shiny and waterproof, and they also add color, which is revealed by firing the clay object in a kiln. These materials have been known to contain potentially harmful ingredients, though many manufacturers have now removed them. “But even today, you can still find ceramic glazes on the market that contain harmful heavy metals,” says Ryan Coppage, Ph.D., the project’s principal investigator. “Achieving the brightest colors has traditionally required using higher amounts of heavy metals, such as barium and cadmium, which can leach from the surface and are toxic at such levels.”

To develop a safer glaze of the desired color, the researchers turned to tiny nanoparticles of gold and silver. Although these metals are technically deemed “heavy,” they are considered benign in small quantities. In fact, they are often used in medical applications, such as in injections for rheumatoid arthritis and as ingredients in antimicrobial preparations. Gold and silver have a highly recognizable yellow or white metallic sheen when seen on the macroscale, but when whittled down to the nanoscale level — that is, between 1 and 100 nanometers per particle — they can take on totally different hues. Their color changes, depending on the size of the particle; nanoscale gold particles can produce deep reds and blues, and tiny silver ones can appear red or even bright green.

As it turns out, gold and silver nanoparticles have been used in works of art for centuries, without artisans even knowing it. “Nanoparticles used in historic works were incidental rather than intentional,” says Nathan Dinh, who worked on the team. He and Coppage are at the University of Richmond. In medieval times, artisans would grind down gold and silver into a very fine powder or use gold or silver salts in their crafts, such as vibrantly colored stained glass windows and chalices. “In modern times, nobody has really put the gold and silver nanoparticles into glazes from scratch, so they can be fired in the same kilns artists use today,” Dinh says. “That’s what we’re trying to do with our work. Our goal is to implement historical techniques using modern technology and know-how.”

To achieve the optimal ceramic glaze, the researchers started with a simple glaze base and mixed it with different combinations and sizes of gold and silver salts and nanoparticles. From there, they applied these test glazes to clay objects and fired them in a traditional ceramic kiln used by local artists. By microscopic examination, the researchers found that the firing process changes the shape and size of the nanoparticles, which in turn influences the final color. The resulting hues depended on the source of the metals, as well as the concentrations used. And by combining both metals into the same glaze, Dinh and Coppage could produce a wide range of colors with the same equipment as hobby ceramicists.

As only a tiny fraction of precious metal is required for this new glaze, it is both cost-effective and environmentally friendly. In fact, the researchers estimate that glazing a single cup would only cost between 30 and 40 cents. And because these nanoparticles are much more efficient at producing colors than other metals, the researchers only needed to add a very small amount of gold or silver, approximately 0.01% by weight. That’s in contrast to conventional glazes that contain heavy metals; these glazes often contain 5-15% heavy metals by weight — with manganese glazes containing up to 50% for metallic sheen.

Next, Coppage and team plan to further explore exactly how the firing process changes gold and silver nanoparticles, which will help them fine-tune the resulting colors. Then, they plan to incorporate other metal nanoparticles into glazes, potentially leading to a broader array of colors for the art community to take advantage of.

This research was generously supported by funding from The Camille & Henry Dreyfus Foundation—Henry Dreyfus Teacher-Scholar Award and the University of Richmond.

Abstract
Many ceramic coatings contain high levels of heavy metal elements as colorants that are environmentally unfriendly and toxic to users. Metallic nanoparticles, including gold and silver, have been proposed as an alternative to these metal colorants due to their versatile color profiles, benign nature, and more efficient color mechanism via surface plasmon resonance. This research explores the effects of common ceramic sintering processes on nanoparticles within glazes in common studio reductive and oxidative kilns. This work also employs direct application of gold and silver salts in glazes to probe and better understand the mechanistic processes for nanoparticle-laced glazes that are viable in the art community. These processes avoid the need for complicated reductants, glassware, or preliminary heating elements, thus allowing for environmentally friendlier yet economically viable applications of nanoparticle colorants.