A New Radiation Detector Made From Graphene

A new bolometer exploits the thermoelectric properties of graphene 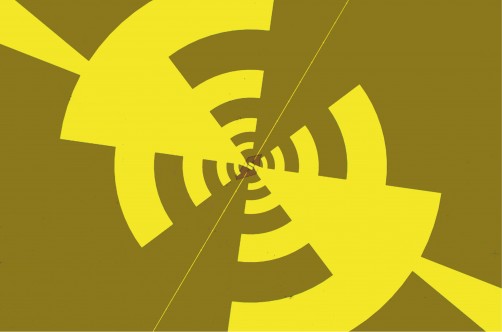 An illustration/photo of the new graphene bolometer

Classified as a bolometer, the new device has a fast response time and, unlike most other bolometers, works over a wide range of temperatures. With a simple design and relatively low cost, this device could be scaled up, enabling a wide range of commercial applications. Researchers describe a graphene-based radiation detector this week in Applied Physics Letters, from AIP Publishing.

The discovery of graphene in 2004 was anticipated to herald a whole new type of technology. "But unfortunately, there are some strong fundamental limitations for this material," said Grigory Skoblin of Chalmers University of Technology in Sweden. "Nowadays, the real industrial applications of graphene are quite limited."

Graphene -- composed of single sheets of carbon atoms that form a flat, hexagonal lattice structure -- has been used mainly for its mechanical properties.

"But our device shows that more fundamental properties can be used in actual applications," Skoblin said. The new bolometer is based on graphene's thermoelectric properties. Radiation heats part of the device, inducing electrons to move. The displaced electrons generate an electric field, which creates a voltage difference across the device. The change in voltage thus provides an essentially direct measurement of the radiation.

The piece of graphene in the new bolometer is small, so it’s one of the fastest bolometers because it heats up and responds quickly. Furthermore, the device remains sensitive to radiation at temperatures up to 200 degrees Celsius. Conventional bolometers typically work only at cryogenic temperatures.

Other researchers have previously made graphene bolometers, with better properties than this new device, but these models contain a double layer of graphene, making them more difficult to scale, Skoblin said.

Another advantage of the new device is its coating. The researchers previously developed a method to coat graphene with a dielectric polymer called Parylene, which offers a good balance of performance and scalability. You can get better performance by coating with hexagonal boron nitride, Skoblin said, but it's hard to acquire and the coating techniques are difficult to scale up. Other studies suggest that a bolometer with hexagonal boron nitride coating would be less efficient.

The prototype bolometer works only with microwave radiation at 94 gigahertz, but future designs will widen the frequency range. Next, the researchers plan to make the device using chemical vapor deposition to grow larger pieces of graphene, paving the way for mass production.