A New Strategy Reported to Combat Influenza and Speed Recovery 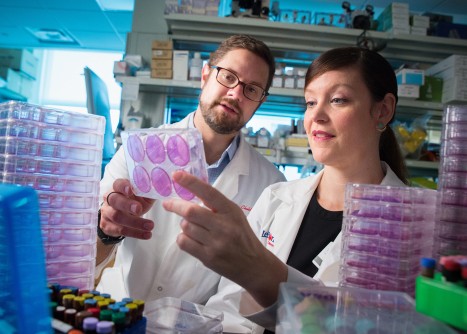 Corresponding author Paul Thomas, Ph.D., an associate member of the St. Jude Department of Immunology, with first author is Heather Smallwood, Ph.D., formerly of St. Jude and now of the University of Tennessee Health Science Center in Memphis

Newswise — The influenza virus turns infected lung cells into factories that churn out thousands of copies of the virus to spread the infection. St. Jude Children’s Research Hospital scientists have reported a promising new approach that uses an investigational cancer drug to dial down viral production and dramatically increase survival of flu-infected mice. The findings appear today in the journal Cell Reports.

“Previously, little was known about how flu infection changed the metabolism of lung epithelial cells; but based on early evidence in this study we suspected metabolism was an Achilles heel of the virus,” said corresponding author Paul Thomas, Ph.D., an associate member of the St. Jude Department of Immunology. “We were not disappointed.”

Researchers showed that flu infection changed the metabolism of human lung epithelial cells, the prime location for replication of flu virus. The alteration radically increased the cells’ dependence on glucose and glutamine, which are the raw materials of viral production. PET scans showed dramatically increased glucose metabolism in the lungs of 20 immune-compromised pediatric cancer patients with flu and other respiratory infections compared to patients without infections.

Working with colleagues who study rapidly dividing tumor cells, the researchers screened 80 small molecules and drugs that targeted cell metabolism rather than the virus. The scientists identified several, including the investigational cancer drug BEZ235, which blocked a key metabolic pathway in flu-infected human lung epithelial cells.

Flu complications are a leading cause of hospitalization and death in the U.S. and worldwide. At risk for serious complications are individuals who are extremely young or old, obese, chronically ill or who have compromised immune systems. Vaccines and medications can help prevent or lessen the infection, but neither is a match for the rapidly changing virus. Vaccines must be reformulated annually, and some flu strains are now resistant to anti-viral drugs.

“By focusing on changing how infected cells respond to the resulting metabolic stress rather than targeting a component of the virus itself, there is less risk that the virus will become resistant to the drugs,” Thomas said.

BEZ235 is being tested in clinical trials for treatment of solid tumors. While using a cancer drug to treat a flu infection might sound surprising, Thomas noted that tumor cells are also metabolically active. As a cancer drug, BEZ235 works by inhibiting the PI3K and mTOR metabolic pathways, which help fuel the unchecked cell division that is a hallmark of cancer.

Working in human lung epithelial cells, researchers used a variety of techniques to show that flu infection increased activity of the PI3K and mTOR pathways and that BEZ235 restored PI3K and mTOR activity to pre-infection levels. Although the drug did not block the virus from infecting human lung cells, investigators demonstrated that BEZ235 reduced viral replication by limiting the ability of the infected cells to use glucose and glutamine to fuel production of more flu viruses.

“This approach works by reducing viral replication, which suggests there might be a treatment window that lasts several days in which drugs could be used to reduce the infection and risk of complications,” Thomas said. Additional research is planned in part to determine if targeting metabolism might also be effective against other respiratory viruses, including emerging respiratory viruses or others like respiratory syncytial virus, which causes life-threatening infections in infants.

The first author is Heather Smallwood, Ph.D., formerly of St. Jude and now of the University of Tennessee Health Science Center in Memphis. The other authors are Barry Shulkin, Anang Shelat, Sandra Milasta, Resha Bajracharya, Martine Roussel and Douglas Green, all of St. Jude; Susu Duan and Marie Morfouace, both formerly of St. Jude; Svetlana Rezinciuc and Ajayi Oluwaseum, both of the University of Tennessee; and Erika Zink and Ljiljana Pasa-Tolic, both of the Pacific Northwest National Laboratory, Richland, Washington.