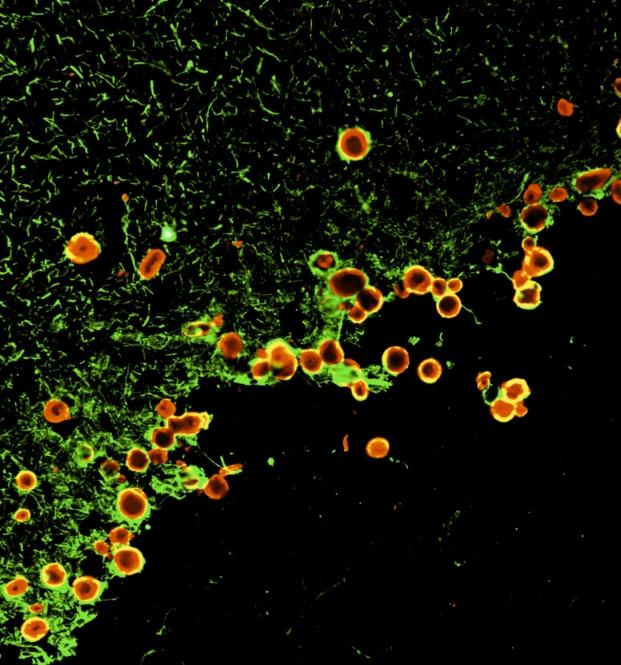 Corpora amylacea formed by polyglucosan aggregates that amass waste products can act as containers that allow the removal of waste products from the brain.

Newswise — An article published in Proceedings of the National Academy of Sciences (PNAS) describes a new pathway in the central nervous system to expel waste substances from the brain through the creation of corpora amylacea (CA), aggregates formed by glucose polymers amassing waste products.

The study, which opens new views on the clinical practice regarding neurodegenerative diseases, is led by Carme Pelegrí and Jordi Vilaplana, lecturers from the Faculty of Pharmacy and Food Sciences, the Institute of Neurosciences (UBNeuro) of the University of Barcelona and the Biomedical Research Networking Center on Neurodegenerative Diseases (CIBERNED).

Human brain corpora amylacea were first described in 1837 by the prestigious anatomist and physiologist Jan Evangelista Purkinje. These are largely in bordering areas in the central nervous system -near the brain ventricles and subsiding regions- and are abundant in the brain of the elderly and patients affected by neurodegenerative diseases (Alzheimer's, Parkinson's, Huntington's, etc.), who create excessive metabolic waste substances. However, the origins and function of CA have been unknown by the scientific community for years.

The article, now published in PNAS, describes new features of CA and reveals the determining role of these structures in the expelling of brain waste substances through pathways in which the nervous system, lymphatic system and immune system take part.

From astrocytes to removal by immune system

According to the traditional scheme, waste-product generated by the cells as result of the cell metabolism are processed in the cell environment (thanks to the ubiquitin proteasome system and autophagy mechanisms) or are expelled outside the cells and transported to the circulatory flow.

The conclusions of the study reveal some waste substances in the brain can be removed thanks to the action of the astrocytes, which can pile up the waste compounds and store them as corpora amylacea. Lecturer Carme Pelegrí notes CA "would be equal to waste products containers". "In a second phase, CA are expelled to the cerebrospinal liquid that surrounds the encephalon and the spinal cord", notes the researcher.

"Then, the cerebrospinal liquid drains to the meningeal lymphatic system and this drives the CA to the cervical lymph nodes, where these are removed by the action of the immune system", concludes Jordi Vilaplana.

Previous studies published by other authors had related CA with the accumulation of waste product. Others believed the CA could be expelled to the cerebrospinal liquid due them being located in the nervous system neighbouring areas. However, the new study is the first one to describe the CA expulsion pathway to the cerebrospinal liquid, its transport towards the lymphatic system and its removal through macrophages. The latter phase was previously predicted by the authors of the study, thanks to the existence of CA in epitopes -antigenic structures-, which are natural antibody targets.

"These science evidence shows corpora amylacea act as waste substance containers that are later expulsed from the nervous system, and are later removed. Thus, these can get out of the central nervous system without having to cross the hematoencephalic barrier, a barrier that prevents substances from going between the brain and the blood", note researchers Carme Pelegrí and Jordi Vilaplana.

Inflection point in the study protocols for corpora amylacea

The research on the origins and functions of CA has been surrounded by a great scientific controversy. A great part of these lack of scientific consensus lies in the misuse of certain experimental protocols -origin of fake results obtained by research teams-, which hardened the progress of this research. All pieces of this puzzle started to make sense after an article published by this group (Scientific Reports, 2017) which showed there is a need to adapt these protocols and that there were new scientific perspectives in the study of the nature and function of corpora amylacea. Therefore, by combining these new protocols and different techniques (optical and electronic microscopy, chemical labelling, in vitro macrophage culture, etc.) enabled the team to clear many doubts on CA.

Looking for new biomarkers in neurosciences

Studying new biomarkers to help identify and assess the progress the neurodegenerative or brain diseases is determining to advance in the diagnosis and treatment of these diseases. In this context, the conclusions of the study reveal that the study of waste substances in the CA -isolated from the solid fraction of the cerebrospinal liquid- could be a new biomedical tool to diagnose certain diseases.

The relation described between CA and the immune system opens new opportunities in the field of research on neurosciences. "In experimental models, the presence of brain substances outside the brain and which interact with the immune system can result in autoimmune brain diseases. It is important and convenient to study the responses that can appear after the interaction between CA and this system", conclude the researchers.