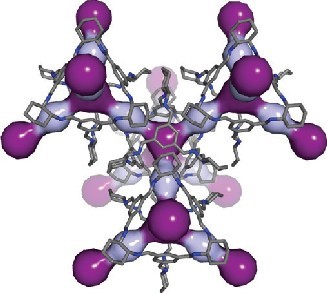 In this computer simulation, light and dark purple highlight the cavities within the 3D pore structure of CC3.

Newswise — RICHLAND, Wash. -- When nuclear fuel gets recycled, the process releases radioactive krypton and xenon gases. Naturally occurring uranium in rock contaminates basements with the related gas radon. A new porous material called CC3 effectively traps these gases, and research appearing July 20 in Nature Materials shows how: by breathing enough to let the gases in but not out.

The CC3 material could be helpful in removing unwanted or hazardous radioactive elements from nuclear fuel or air in buildings and also in recycling useful elements from the nuclear fuel cycle. CC3 is much more selective in trapping these gases compared to other experimental materials. Also, CC3 will likely use less energy to recover elements than conventional treatments, according to the authors.

The team made up of scientists at the University of Liverpool in the U.K., the Department of Energy's Pacific Northwest National Laboratory, Newcastle University in the U.K., and Aix-Marseille Universite in France performed simulations and laboratory experiments to determine how -- and how well -- CC3 might separate these gases from exhaust or waste.

"Xenon, krypton and radon are noble gases, which are chemically inert. That makes it difficult to find materials that can trap them," said coauthor Praveen Thallapally of PNNL. "So we were happily surprised at how easily CC3 removed them from the gas stream."

Noble gases are rare in the atmosphere but some such as radon come in radioactive forms and can contribute to cancer. Others such as xenon are useful industrial gases in commercial lighting, medical imaging and anesthesia.

The conventional way to remove xenon from the air or recover it from nuclear fuel involves cooling the air far below where water freezes. Such cryogenic separations are energy intensive and expensive. Researchers have been exploring materials called metal-organic frameworks, also known as MOFs, that could potentially trap xenon and krypton without having to use cryogenics. Although a leading MOF could remove xenon at very low concentrations and at ambient temperatures admirably, researchers wanted to find a material that performed better.

Thallapally's collaborator Andrew Cooper at the University of Liverpool and others had been researching materials called porous organic cages, whose molecular structures are made up of repeating units that form 3-D cages. Cages built from a molecule called CC3 are the right size to hold about three atoms of xenon, krypton or radon.

To test whether CC3 might be useful here, the team simulated on a computer CC3 interacting with atoms of xenon and other noble gases. The molecular structure of CC3 naturally expands and contracts. The researchers found this breathing created a hole in the cage that grew to 4.5 angstroms wide and shrunk to 3.6 angstroms. One atom of xenon is 4.1 angstroms wide, suggesting it could fit within the window if the cage opens long enough. (Krypton and radon are 3.69 angstroms and 4.17 angstroms wide, respectively, and it takes 10 million angstroms to span a millimeter.)

The computer simulations revealed that CC3 opens its windows big enough for xenon about 7 percent of the time, but that is enough for xenon to hop in. In addition, xenon has a higher likelihood of hopping in than hopping out, essentially trapping the noble gas inside.

The team then tested how well CC3 could pull low concentrations of xenon and krypton out of air, a mix of gases that included oxygen, argon, carbon dioxide and nitrogen. With xenon at 400 parts per million and krypton at 40 parts per million, the researchers sent the mix through a sample of CC3 and measured how long it took for the gases to come out the other side.

Oxygen, nitrogen, argon and carbon dioxide -- abundant components of air -- traveled through the CC3 and continued to be measured for the experiment's full 45 minute span. Xenon however stayed within the CC3 for 15 minutes, showing that CC3 could separate xenon from air.

In addition, CC3 trapped twice as much xenon as the leading MOF material. It also caught xenon 20 times more often than it caught krypton, a characteristic known as selectivity. The leading MOF only preferred xenon 7 times as much. These experiments indicated improved performance in two important characteristics of such a material, capacity and selectivity.

"We know that CC3 does this but we're not sure why. Once we understand why CC3 traps the noble gases so easily, we can improve on it," said Thallapally.

To explore whether MOFs and porous organic cages offer economic advantages, the researchers estimated the cost compared to cryogenic separations and determined they would likely be less expensive.

"Because these materials function well at ambient or close to ambient temperatures, the processes based on them are less energy intensive to use," said PNNL's Denis Strachan.

The material might also find use in pharmaceuticals. Most molecules come in right- and left-handed forms and often only one form works in people. In additional experiments, Cooper and colleagues in the U.K. tested CC3's ability to distinguish and separate left- and right-handed versions of an alcohol. After separating left- and right-handed forms of CC3, the team showed in biochemical experiments that each form selectively trapped only one form of the alcohol.

This work was supported by the Department of Energy Office of Nuclear Energy.

Interdisciplinary teams at Pacific Northwest National Laboratory address many of America's most pressing issues in energy, the environment and national security through advances in basic and applied science. PNNL employs 4,500 staff, has an annual budget of nearly $1 billion, and has been managed for the U.S. Department of Energy by Ohio-based Battelle since the laboratory's inception in 1965. For more, visit the PNNL's News Center, or follow PNNL on Facebook, LinkedIn and Twitter. The Department of Energy's Office of Science is the single largest supporter of basic research in the physical sciences in the United States and is working to address some of the most pressing challenges of our time.